Phytobezoar in the terminal ileum: an uncommon cause of bowel obstruction

LETTER TO THE EDITOR

Phytobezoars, although rare, are known to cause mechanical obstruction in the digestive tract1,2,7. They are responsible for approximately 2% to 3% of all small intestine obstructions1,2. They are composed of agglomerated matter indigestible to humans, such as hairs, seeds and fibers from vegetables and fruit2, especially persimmon and pineapple2,3,4. They mainly occur in patients who have had abdominal surgery2, mainly gastric operations1,2,3,6,7. In patients without prior surgery, reports in literature show the main cause as ingestion of persimmon and orange with the pith; other less frequent causes are nuts, coconut, tomatoes, cherries and raisins7.

Depending on site, clinical manifestations can vary between acute abdominal syndrome and the patient being completely asymptomatic4,8. Imaging is useful in diagnosis4,6,8, but most cases are only diagnosed during surgery1. The objective of treatment is removal and preventing recurrence1,3,4,5.

After venous rehydration, the patient underwent exploratory laparotomy, during which an intra-luminal mobile structure was found in the terminal ileum. An attempt to manipulate the foreign body towards the ileocecal valve was unsuccessful. Enterotomy was then performed and a yellow colored, about 6 cm long and 2 cm diameter material was removed. More careful examination showed to be a phytobezoar of pineapple. Anatomopathological examination revealed degenerated vegetable matter.

The patient's condition deteriorated after surgery, needing intensive care unit treatment and died on the 5th day after surgery.

Small intestine involvement is rare2,3,5,8, making up only 5% of all phytobezoar cases2,3. Retrospective study showed that from a total of 375 intestine obstruction cases, only 15 were caused by phytobezoars, of which 13 were in the terminal ileum1, as in this case.

Its development is a multifactor process which involves anatomical, dietetic, and food factors1. The main predisposing factors are gastric operations1,2,3,5,6,7, as they can cause disturbances in gastric motility, secondary to vagotomy, which accelerates gastric emptying and reduces gastric acid secretion, leading to more viscous stomach contents for the intestine. In addition, gastrectomy and gastroenterostomy allow large diameter solid material to pass from the stomach to the small intestine1,3,4.

The terminal ileum region being the narrowest part of the small intestine with relatively weak peristalsis3,5, phytobezoars are more likely to be lodge in this site3. In this location, the main causes are persimmon and oranges (pith)7.

Other predisposing factors include diabetic gastroparesis, poor mastication, poor dental health, hypothyroidism, food abuse with high fiber content, and medication which affects gastric motility1,3,4,6. One of the main symptoms is intestinal occlusion4,5,8, with abdominal and epigastric pain, vomiting and nausea, abdominal plenitude or distension, dysphagia, and anorexia with weight loss, while some patients can even present gastrointestinal hemorrhage3,4.

Intestinal occlusion, the most frequent cause, can be found in up to 60% of phytobezoar4 cases and generally requires surgical treatment5. Generally this occlusion results from gastric phytobezoar migration, or could first form in the small intestine, often in association with other diseases of diverticulum, stenosis, or tumor origin4,5,6.

These cases are often not diagnosed before surgery due to the absence of specific signs, require clinical or complimentary examinations1,3,8. Most published series have emphasized a typical triad for diagnosis: clinical exam, abdominal X-ray, and small intestine study1. However the triad only gives a pre-surgical diagnosis in 10% of cases1. However abdominal tomography allows confirmation of obstruction diagnosis, obstruction site, and eventual identification of the cause1,3,6,8. Laparoscopy can also be useful in diagnosis and treatment of intestinal phytobezoar3. The aim of treatment is to empty the intestinal lumen, treat possible complications and avoid recurrence1,3,4,5. If the phyobezoar is soft, it can probably be manipulated through the ileocecal junction1,2,3,7. If not, enterotomy must follow with direct extraction1,3,4,7. However, this should be avoided at all costs due to the risk of contaminating the abdominal or cutaneous cavity3. Intestine resection is rarely indicated and should be reserved for cases of intestinal necrosis1,3,4. Also the entire gastrointestinal tract should be carefully examined during surgery2,3,5,7, to exclude the presence of a synchronous phytobezoar2,3,4,5,7.

In relation to the unfavorable evolution in this patient, Erzurumlu et al.4 described this evolution as common (32%) and generally caused by multiple organ failure or sepsis. 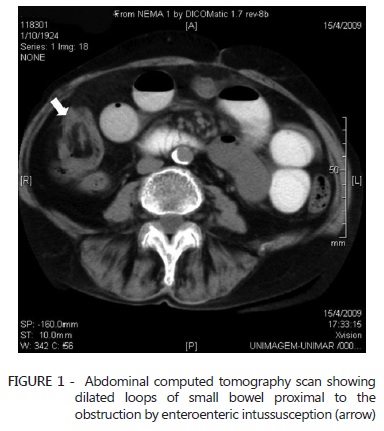