Fogo selvagem, or endemic pemphigus foliaceus, is an organ-specific disease, where IgG autoantibodies, especially from the IgG4 subclass are directed against the ectodomains of desmoglein 1, culminating in acantholysis. Genetic and environmental influences modulate this specific autoimmune response; individuals with a determined sequence of alleles (LLEQRRAA) in the positions 67-74 of the third hypervariable region of the HLA-DRB1, or those exposed to hematophagous insects, especially Simulium nigrimanum, are more susceptible to develop the disease. A possible explanation for the development of the autoimmune process would be antigenic mimicry, initiated by environmental stimuli in those genetically predisposed individuals.

Fogo selvagem, or endemic pemphigus foliaceus, is an organ-specific disease, where IgG autoantibodies, especially from the IgG4 subclass are directed against the ectodomains of desmoglein 1, culminating in acantholysis. Genetic and environmental influences modulate this specific autoimmune response; individuals with a determined sequence of alleles (LLEQRRAA) in the positions 67-74 of the third hypervariable region of the HLA-DRB1, or those exposed to hematophagous insects, especially Simulium nigrimanum, are more susceptible to develop the disease. A possible explanation for the development of the autoimmune process would be antigenic mimicry, initiated by environmental stimuli in those genetically predisposed individuals.

Pemphigus are autoimmune blistering diseases characterized by IgG autoantibodies directed against desmosomal glycoproteins.1 The antigen-antibody complex leads to cell-cell detachment, or acantholysis, the hallmark of pemphigus; this phenomenon is clinically evidenced by cutaneous or mucosal vesicles or blisters.

The present classification of the acquired, intraepidermal, acantholitic blistering dermatoses and their correspondent identified autoantigens are listed in chart 1.2,3 Pathogenicity of the IgG autoantibodies in pemphigus vulgaris (PV) and foliaceus (PF) was confirmed with murine experimental models. Reproduction of clinical, histopathologic and immunological features of these dermatoses was observed after IgG passive transfer.4,5

Endemic pemphigus foliaceus (EPF) or fogo selvagem (FS) represents a relevant condition in Brazil, once it associates endemic features to autoimmunity. No clinical or immunological differences are seen between the classic or endemic forms. However, its occurrence in children or young adults, the presence of familial cases, and the identification of endemic geographic areas (especially in Brazil) confer to EPF unique features.6-8

The etiopathogenesis of EPF is complex and depends on multiple factors, with the involvement of genetics, environment and immunological abnormalities.

The occurrence of familial EPF is one of the features that differentiates it from the classic form.1 In a study performed in Goias, where 2,686 patients were analised,6 familial cases comprised 18% of the total. The expression of the HLADRB1 alleles, such as 0404, 1402 or 1406 is highly related to EPF (RR14).9 These alleles share a common epitope, represented by an aminoacid sequence (LLEQRRAA) which is present in the hypervariable region of the DRB1 gene in the positions 67-74, and confers susceptibility to EPF.10

The first evidence that EPF autoantibodies were directed against structures of the intercellular cement was described by Beutner et al. in 1968.11 These authors utilizing immunofluorescence technique showed the presence of cutaneous or circulating IgG antibodies reacting in the intercellular spaces of the epidermis, in a similar pattern to the classic PF (Figure 1).

The IgG isotype characterization by indirect immunofluorescence (IIF) revealed a predominance of the IgG4 subclass. IgG1 and IgG2 autoantibodies are also detected, but in low titers, whereas an absence of IgG3 is observed. IgG4 is a pathogenic isotype, leading to experimental disease in murines.12,13 Recent studies reported low titers of IgG4 in EPF patients under clinical remission, indicating a possible reactivation of the disease, if these antibodies recognize pathogenic epitopes of desmoglein1 (Dsg1).14

The heterogenicity of IgG isotypes utilizing recombinant desmoglein 1 (rDsg1) by ELISA (enzyme-linked immunosorbent assay) in different clinical phases of EPF has been widely described.15 The predominant high levels of IgG4 in active disease were coincident in both IIF and ELISA. Interestingly, the detection of low levels of IgG1 in patients under remission, or in healthy controls living in endemic areas was reported.

2.2 Desmoglein 1: the autoantigen of EPF

The identification of the EPF autoantigen was established in 1986 by Stanley et al.16 In this study it was confirmed that Dsg1, a 160kDa glycoprotein was the autoantigen of classic and endemic PF.

Dsg1 belongs to the cadherins superfamily, which are calcium-dependent adhesion molecules. They mediate cellular adhesion and maintain cellular integrity. They are transmembrane proteins, and its intracellular domains are probably related to adhesion and cytoskeleton integrity, whereas the extracellular domains are also involved in the pathogenesis of skin diseases, once they have antigenic determinants (epitopes). There are two major forms of cadherins: the classic, located at the adherens junctions (E-and P-cadherins), and the desmosomal. located in the desmosomes (desmogleins 1-4, desmocolins 1-3).17

A comparative study of techniques for autoantibody detection in EPF utilizing immunoblotting (IB) with human epidermal extracts and immunoprecipitation (IP) with bovine Dsg1 shows that IB, although highly specific, has a low sensitivity. One of the possible explanations for this fact would be protein denaturation during its processing, leading to the destruction of its conformational structure, and consequently damaging the antigen-antibody binding. IP, however, proved to be a highly sensitive and specific technique for EPF, with a 100% of reactivity against bovine Dsg1, probably due to the maintenance of the antigen structure.18

2.3 Laboratorial advances in the detection of autoantibodies in EPF

The development of molecular biology techniques and the production of recombinant antigens led to significant advances in the autoimmune blistering diseases laboratory diagnosis.

One of the main applications of genetic engineering is the ability to produce high amounts of polipeptides, codified by a complimentary desoxirribonucleic acid (cDNA). A determined human cDNA, when attached to an expression vector produces a hybrid gene (human/bacterial). This cDNA recombinant molecule is inserted in a host cell (bacteria or virus), that expresses the required protein in a big scale.

Baculovirus represent a system, which is utilized for expression of different genes. They have been used to express genes of diverse species (virus, plants, mammals). They can be transfected to host cells, such as insect cells (Spodoptera frugiperda, or Sf9). The viral particles penetrate the host cell by endocytosis or fusion towards the nucleus; after 6 hours the viral DNA is replicated.18

Baculovirus expression of rDsg1 brought important contributions for enhancing the laboratorial methods available for pemphigus19 A chimeric Dsg1 (PFIg), consequent to the fusion of an extracellular domain of the Dsg1 with the constant region of the human IgG, was created. Its genetic code is expressed in a baculovirus system, and is transfected to the Sf9 insect cells. The recombinant virus is then transfected to High five cells, and is produced in a large scale. Studies with autoantibodies in PF reacting against ectodomains (EC) of Dsg1 were performed, proving that the EC-1 and EC-2 portions of the molecule are related to the pathogenesis of the disease.

ELISA technique with rDsg (1 and 3) expressed in a baculovirus system was introduced in 1997.20 It is a valuable diagnostic tool for pemphigus, once it has a high sensitivity and specificity. Positive values for pemphigus foliaceus were found in 96% of the evaluated sera, and for pemphigus vulgaris, positive values were shown in 94% of the analysed samples.

A study involving the response in EPF against rDsg1 by immunoprecipitation (IP) showed that IP is positive in 100% of the cases, despite the level of disease activity (Figure 3). This technique also revealed autoantibodies present in the 10% of sera of healthy individuals living in endemic areas, who developed EPF two years after the follow-up. Moreover, 14% of the healthy controls recognized Dsg1 by IP, suggesting this population at risk should be under immunological surveillance for EPF.18

2.3.3 Significance of Epitope Spreading in EPF

Epitope spreading is a phenomenon that occurs in autoimmune diseases. One of the possible explanations for this mechanism is the migration of the autoantibody targets that may extend to different epitopes within the same molecule or to other proteins. Another situation includes the exposition of hidden antigens that appear after an inflammatory process in autoimmune conditions.21

In EPF, an intramolecular epitope spreading could explain the presence of autoantibodies in healthy individuals that live in endemic areas, but who do not develop the disease.22 Li et al.23 demonstrated that these healthy controls from endemic areas exhibit autoantibodies that recognize non-pathogenic portions of Dsg1 (EC-5). If these patients have the HLADRB1 allele sequence that confers EPF susceptibility (see item1), and receive environmental stimuli capable of triggering the pathogenic recognition of Dsg1 (EC1-2), the disease is then deflagrated. (Figure 4). 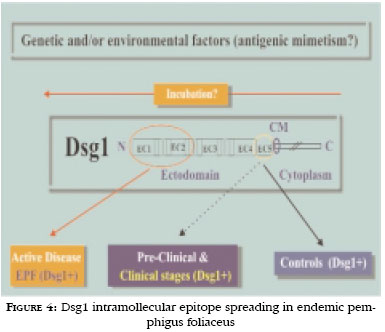 The cellular immune response in EPF has a Th2 cytokine profile, as demonstrated by Lin et al.24 In this paper the authors demonstrate that T cells from EPF patients react against the ectodomains of Dsg1 have a CD4+ phenotype, and produce a Th2 cytokine profile, dependent on the MHC class II (HLA-DR). The Th2 pattern leads to IgG4 production after interleukin 4,5 and 6 release, and explains the predominance of this IgG isotype. This response may be provoked by an environmental stimulus, which could be mimicring or modifying the Dsg1 ectodomain.

The role of possible environmental factors in EPF has been exhaustively raised, especially the role of the black fly. In one of the pioneer epidemilogical analyses of the Cooperative Group for Fogo Selvagem Research, it was reported that black fly bites were 4.7 times more frequent in individuals with EPF than in controls.26 Further studies27 revealed that Simulium nigrimanum was the black fly predominant species in a high prevalence EPF area, the Amerindian Terena reservation of Limão Verde, 25 km distant from Aquidauana, MS.28 This finding awoke great interest, once the black fly species found in the endemic EPF area is distinct from the species found in non-endemic areas.

Exposure of the patient to other environmental factors, such as different hematophagous insects (Triatoma and Cimex), rustic houses, with thatched roofs and adobe walls seemed to be relevant in triggering the disease.29

Recent work from the Cooperative Group for Fogo Selvagem reinforces a possible environmental trigger generated by repetitive exposure to hematophagous insect bites.30 In this study, sera from patients with leishmaniasis, Chagas disease and onchocerciasis recognize the EC-5 portion of Dsg1. Leishmaniasis and Chagas disease are endemic in Brazil, with the involvement of hematophagous insects. It is possible that some individuals that initiate this non-pathogenic response with a genetic predisposition may develop the epitope spreading phenomenon, and start to recognize the pathogenic ectodomains of Dsg1 after repetitive insect bites.

Fogo selvagem or endemic pemphigus foliaceus is an autoimmune disease, with a varied influence in its pathogenesis, including genetic, environmental and epidemiological influence. The auto-antigen involved is desmoglein 1 (Dsg1), a glycoprotein located in the desmosomal core. Non-pathogenic autoantibodies directed against the extracellular 5 portion of Dsg1 may be present in healthy individuals living in endemic areas. If environmental influence, such as insect bites, or genetic predisposition modulate the immunological response, pathogenic autoantibodies start to recognize other antigenic determinants of Dsg1 (EC1-2), characterizing the epitope spreading phenomenon, and deflagrating the cutaneous disease. A possible antigenic mimicry might be involved in triggering the autoimmune response. q

Approved by the Editorial Council and accepted for publication on April 18, 2005.