Elastosis perforans serpiginosa in a patient with Down's syndrome

Elastosis perforans serpiginosa is a rare, primary perforating dermatosis, frequently associated with certain genetic diseases and characterized by the transepidermal extrusion of elastic fibers. The present case report describes this dermatosis in a 19-year old female patient with Down's syndrome, who presented with asymptomatic erythematous, keratotic papules in an arciform pattern, located on her right forearm and knee, which had been present for five years. Following histopathological confirmation, treatment with cryotherapy was initiated, resulting in partial remission of the lesions.

Elastosis perforans serpiginosa in a patient with Down's syndrome*

Elastosis perforans serpiginosa is a rare, primary perforating dermatosis, frequently associated with certain genetic diseases and characterized by the transepidermal extrusion of elastic fibers. The present case report describes this dermatosis in a 19-year old female patient with Down's syndrome, who presented with asymptomatic erythematous, keratotic papules in an arciform pattern, located on her right forearm and knee, which had been present for five years. Following histopathological confirmation, treatment with cryotherapy was initiated, resulting in partial remission of the lesions.

Elastosis perforans serpiginosa (EPS) is a rare skin condition included among the primary perforating dermatoses of dermal origin. It is considered a benign condition, since there are no extracutaneous manifestations. Its etiopathogenesis remains to be clarified. Focal dermal irritation is believed to induce the formation of a transepidermal channel to eliminate the irritant agent. It is normally associated with hereditary diseases of the connective tissue and with the use of D-penicillamine for Wilson disease, cystinuria and rheumatoid arthritis. 1,2

It is characterized clinically by papules and keratotic, desquamative, normochromic or erythematous plaques, usually affecting the face, neck, trunk and upper limbs. 1,2 Histopathology is the gold-standard test for diagnosis, typical findings consisting of qualitative and quantitative changes in dermal elastic fibers and their transepidermal elimination. 3

There is no standard therapy; however, successful treatment has been reported with the use of cryotherapy with liquid nitrogen, isotretinoin, tazarotene, imiquimod and CO2, Er:YAG and pulsed dye lasers. 4-6 In a minority of cases, spontaneous resolution of lesions has been reported. 1,2 The present report describes the case of a patient with Down's syndrome who has had EPS for the past five years.

A young, 19-year old, white female patient with Down's syndrome complained of asymptomatic skin lesions on her right arm and knee that had appeared three years previously. She reported having had a similar condition on the medial surface of her left arm five years previously when she received a diagnosis of granuloma annulare, which was treated unsuccessfully with clobetasol propionate cream 0.05%; however, the lesions disappeared spontaneously. There were no other signs or symptoms. The patient also had hypercholesterolemia, which was being treated with simvastatin 20 mg/day.

Dermatological examination revealed erythematous papules with a keratotic surface, arranged in an arciform or annular pattern, with atrophic, scarred centers. The lesions were located on the medial surface of the patient's right forearm (Figure 1) and on the extensor surface of her right knee (Figure 2).

A diagnosis of EPS was confirmed and cryotherapy with liquid nitrogen was performed over multiple sessions. Up to the present time, partial remission has been achieved.

EPS is characterized clinically by papules and keratotic plaques and histologically by focal elastosis of the dermis and transepidermal elimination of abnormal elastic fibers. It is a rare skin disease classified as a primary perforating dermatosis similar to reactive perforating collagenosis, perforating folliculitis and Kyrle disease. It was initially described by Lutz in 1953 and denominated keratosis follicularis serpiginosa. 3 In 1955, Miescher found elastin in the material eliminated transepidermally and suggested the name of elastoma intrapapillare perforans verruciforme. 1 It was given the current denomination of elastosis perforans serpiginosa in 1958 by Dammert and Putkonen. 3

The incidence of EPS has yet to be established. Around 90% of patients develop symptoms of the disease prior to 30 years of age, the majority between 6 and 20 years of age; however, age at onset may range from 5 to 89 years, as reported in the literature. Approximately 75% of those affected are male and there appears to be no preference with respect to race. 2 Familial groupings have been reported with varying hereditary patterns. 7

Although the etiopathogenesis is as yet unclear, it is believed that the focal inflammation in the dermis, which has a biochemical or mechanical origin, may induce the formation of epidermal and follicular channels to expulse abnormal elastic fibers considered irritants. Fujimoto et al. reported interactions between elastin peptides and their 67kDa receptors expressed in the epidermis surrounding the transepidermal elimination channel, which may participate in the pathogenesis of the disease.8

EPS is classified into three types: 1) idiopathic; 2) reactive, associated in 25% of cases with connective tissue diseases such as Ehlers-Danlos syndrome, cutis laxa, Marfan syndrome, pseudoxanthoma elasticum and osteogenesis imperfecta among others, as well as Down's syndrome; and 3) induced by D-penicillamine. 1 The association between EPS and Down's syndrome is unknown; however, factors present in this syndrome such as premature skin aging, joint hyperelasticity and acrocyanosis may suggest an underlying connective tissue disorder. 1,2 table 1 illustrates some clinical and epidemiological features of the association between EPS and Down's syndrome. 2,3,9-12

The disorder may present with papules and erythematous or normochromic, keratotic, asymptomatic or pruriginous plaques grouped in an annular, arciform or serpiginous pattern, surrounded by satellite lesions. They have umbilicated centers from which dermal material is eliminated. The lesions are characteristically symmetrical except in cases associated with Down's syndrome or D-penicillamine treatment. Disseminated lesions, albeit rare, have been described. 13-15 The condition most commonly affects the face, the neck and the upper limbs. Lesions develop slowly, disappearing spontaneously in some cases after six months to five years, leaving superficial scarring. 1,2,4

The gold-standard for diagnosis is histopathological examination of the skin lesions. Histopathology is characterized by transepidermal or perifollicular channels that extend from the dermis in a linear or spiral pattern, containing a mixture of eosinophilic elastic fibers, basophilic debris and inflammatory cells. The elastic fibers are thick and numerous, causing foci of chronic inflammation in the upper dermis, thus justifying their extrusion. The epidermis may be acantholytic and hyperkeratotic. 1,2

Various forms of treatment have been indicated; however, management of the disease is difficult and there is no standard treatment. There have been reports of therapeutic success using cryotherapy with liquid nitrogen and oral isotretinoin.1 Outland et al. described remission of the condition following treatment with 0.1% tazarotene gel. 6 Kelly et al reported success after 10 weeks of therapy with imiquimod. 4 Treatment using CO2, Er:YAG and pulsed dye lasers has also been reported in the literature, although results are controversial. Kaufman reported benefits with one or two sessions of pulsed dye laser, while Abdullah et al. reported resolution of the lesions following a single session of CO2 laser. Saxena et al., on the other hand, failed to obtain a good response with this form of treatment. 5

The authors gratefully acknowledge the important contribution made by Professor Antônio Carlos Martins Guedes in the histopathological analysis of this case, enabling diagnosis to be reached. 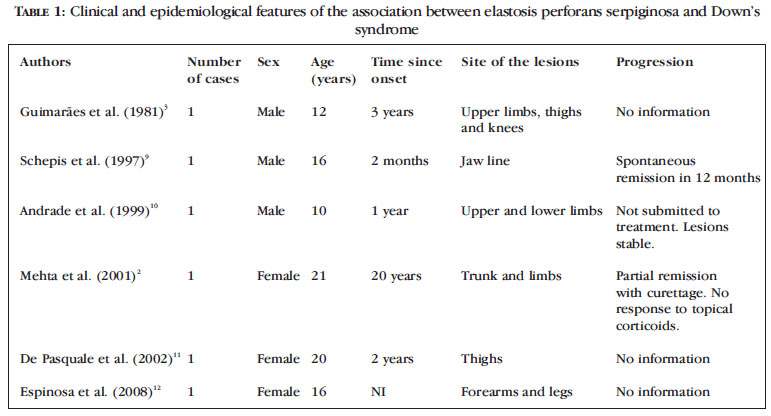