OBJECTIVE: To analyze drug prescriptions for insulin and oral antidiabetic drugs in type 1 and type 2 diabetes mellitus patients seen in the Brazilian Public Healthcare System (Unified Health System - SUS) in Ribeirao Preto, SP, Brazil. SUBJECTS AND METHODS: All the patients with diabetes seen in the SUS in the western district of Ribeirao Preto, SP, Brazil between March/2006 and February/2007 were included in the study. RESULTS: A total of 3,982 patients were identified. Mean age of the patients was 60.6 years, and 61.0% were females. Sixty percent of the patients were treated with monotherapy. Doses of oral antidiabetic drugs were lower in monotherapy than in polytherapy. Ten patients received doses of glibenclamide or metformin above the recommended maximum doses, and in elderly patients there was no reduction in drug doses. CONCLUSION: Monotherapy with oral antidiabetic drugs was the predominant procedure, and the doses were not individualized according to age. 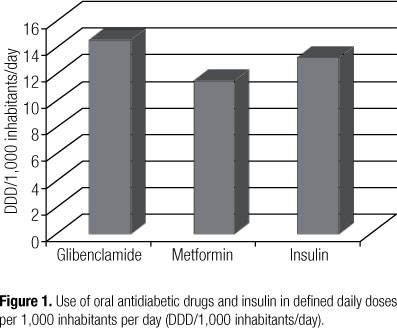