Ochronosis is a cutaneous disorder caused by the accumulation of phenols, either endogenously as homogentisic acid in patients with alkaptonuria (autosomal recessive disorder with deficiency of the enzyme homogentisic acid oxidase), or exogenously in patients using phenol products such as topical creams containing hydroquinone or the intramuscular application of antimalarial drugs. Exogenous ochronosis (EO) typically affects the face and was reported in patients with dark skin such as Black South Africans or Hispanics who use skin-lightening products containing hydroquinone for extended periods. Recently more cases have been reported worldwide even in patients with lighter skin tones, to include Eastern Indians, Asians, and Europeans. However, just 39 cases of EO have been reported in the US literature from 1983 to 2020. Here we present two cases; a 69 and a 45-year-old female who were seen for melasma, given hydroquinone 4% cream daily and tretinoin 0.05%. Both patients noticed brown spots on their cheeks, which progressively enlarged and darkened in color. The diagnosis of ochronosis was confirmed by characteristic histopathological features on the punch biopsy. Unfortunately, neither patient responded to multiple treatments (to include, tazarotene 0.1% gel and pimecrolimus ointment, topical corticosteroids, and avoidance of hydroquinone containing products). We also present a case of classic (endogenous) ochronosis in a patient with alkaptonuria to picture the histological similarities of these two entities. EO is an important clinical consideration because early diagnosis and treatment may offer the best outcome for this notoriously refractory clinical diagnosis.

Case#1: A 58-year-old female with a history of melasma was treated with hydroquinone 4% cream daily and tretinoin cream with some improvement. After a year, she noticed a red, scaly patch on her left cheek that progressively grew and darkened in color. The patches became gray-black, itchy, and tender (Figure 1A). Due to the history of long-term use of hydroquinone, and the asymmetrical presentation of the facial lesion, the clinical diagnosis of exogenous ochronosis was favored. Histological examination showed yellow-brown sharply defined irregularly shaped pigment granules in the upper dermis, diagnostic of exogenous ochronosis (Figure 1B). She discontinued the hydroquinone and tretinoin, and started desonide 0.5% lotion with sun protection. After a month, lesional inflammation was decreased, but the hyperpigmentation and a mild thickening persisted. She continued hydrocortisone cream and sun protection creams with minimal improvement in her symptoms.

Case #2: A 68-year-old female presented with clinically diagnosed chronic melasma characterized by dark brown hyperpigmented macules coalescing into patches on both cheeks. She did not respond to tretinoin 0.05% cream and hydroquinone 4% cream daily for one year. The cheek macules became erythematous and darker with hypopigmentation of the surrounding area (Figure 2A). Histological examination showed yellow-brown dermal deposits with “banana bodies,” diagnostic of ochronosis (Figure 2B). She started tazarotene 0.1% gel with pimecrolimus cream and sun protection. Unfortunately, one year of follow up showed minimal to no improvement.

Figure 2
A – Exogenous ochronosis. Case #2, 68-year-old female with hyperpigmented macules which did not respond to HQ 4% and tretinoin 0.05%. The macules gradually got darker and erythematous with surrounding hypopigmentation; B – Photomicrography of the skin biopsy of skin case #2, showing banana-like bodies (ochronotic bodies) in the superficial dermis (H&E, 100X magnification).

Case #3: A 63-year-old male with a history of knee, hip, and shoulder osteoarthritis and lumbar degenerative disc disease presented for management of severe multifocal osteoarthritis. Pigmentation of both ears was noted on physical examination, which was reportedly congenital. Radiological findings showed severe and extensive lumbar disc and facet joint degeneration with disproportionately minor osteophytes and calcification of numerous discs, that favored ochronosis with ochronosis-associated arthropathy (Figure 3).

Ochrone means bright yellow in Latin. The term ochronosis was first coined by Rudolf Virchow (1821-1902) in 1865, describing the strange dark lesions in an elderly man on autopsy, which on H&E were attributed to the presence of yellowish-brown pigments on light microscopic examination.

Two types of ochronosis have been described, exogenous and endogenous. Endogenous ochronosis is caused by alkaptonuria, an autosomal recessive disorder in which the absence of homogentisic acid oxidase leads to accumulation of homogentisic acid (HGA) in the body. HGA is soluble in water and circulates in the blood. It is polymerized into a yellow-green pigment in the susceptible connective tissue. It binds irreversibly with the developing collagen fibers and imparts a dark color to the affected tissue. Certain tissues are more susceptible to the accumulation of HGA, including skin and especially articular cartilage of joints. The most common areas of skin involvement in alkaptonuria are the nasal tip, sclera of the eyes, cheeks, and the pinnae of ears. These patients excrete HGA in urine, which is oxidized by ambient oxygen to benzoquinone acetate, turning the urine dark black. The diagnosis of alkaptonuria is usually made in the third or fourth decade of life.

In humans, the phenols form complexes such as hydroquinone are excreted after conjugation with glucuronic acid or sulfur. These metabolic pathways can only handle a small amount to process and excrete. In the situation of excess absorption of these substances, the excretory pathways are overwhelmed, leading to the accumulation of these substances in the tissues. It has been observed that the tissues where oxidation pathways are active in the extracellular matrix, hydroquinone, and phenols are oxidatively polymerized and stored as a dark amorphous solid pigment. This pigment is then taken up by the developing fibers and remains in the extracellular matrix of these tissues. This pigment accumulation has not been shown to affect the functionality of the tissue. The prolonged accumulation of polymerized homogentisic acid stimulates melanin production, thus, leading to a blue-black hue/ting to the tissue.55 Findlay GH, Morrison JG, Simson IW. Exogenous ochronosis and pigmented colloid milium from hydroquinone bleaching creams. Br J Dermatol. 1975;93(6):613-22. http://dx.doi.org/10.1111/j.1365-2133.1975.tb05110.x. PMid:1220808.
http://dx.doi.org/10.1111/j.1365-2133.19... The dark-blue or grayish-blue pigment is visible in the skin when this process takes place in the dermis, especially the dermis of the face because of excessive and prolonged use of hydroquinone containing products and depends on the depth of pigment accumulation. Clinically, it can manifest as macules and papules obliterating the follicular orifices with accentuation of the normal pseudo network of the skin.

A review of the English-speaking literature was performed using the PubMed database by searching the terms “ochronosis” and “Exogenous Ochronosis”. Incidence of exogenous ochronosis (EO) has been extremely low in the United States (US), and only 39 cases have been described in the English literature since 1983 to 2020 (Table 1).

Thumbnail
Table 1
Exogenous Ochronosis Reported in the US from 1983 to 2020.

One possible explanation can be attributed to EO being under reported or underdiagnosed. Hyperpigmentation and melasma commonly affect the female population of the African, Hispanic and Asian descends. In certain Asian communities, the incidence of hyperpigmentation is estimated to be around 40%.1616 Simmons BJ, Griffith RD, Bray FN, Falto-Aizpurua LA, Nouri K. Exogenous ochronosis: a comprehensive review of the diagnosis, epidemiology, causes, and treatments. Am J Clin Dermatol. 2015;16(3):205-12. http://dx.doi.org/10.1007/s40257-015-0126-8. PMid:25837718.
http://dx.doi.org/10.1007/s40257-015-012... As a result of demographic and cultural shifts, it is reasonable to believe that the use of bleaching and whitening compounds, including hydroquinone products, may increase, leading to the comparatively more frequent encounter of exogenous ochronosis in the US.

This study includes data from an abstract that was accepted for a presentation at the American Society of Dermatopathologist (ASDP) 2019 in San Diego, USA.

Thumbnail
Figure 2
A – Exogenous ochronosis. Case #2, 68-year-old female with hyperpigmented macules which did not respond to HQ 4% and tretinoin 0.05%. The macules gradually got darker and erythematous with surrounding hypopigmentation; B – Photomicrography of the skin biopsy of skin case #2, showing banana-like bodies (ochronotic bodies) in the superficial dermis (H&E, 100X magnification).

Thumbnail
Figure 4
A – Alkaptonuria. Gross examination of total knee arthroplasty showing unusual dark articular surface (head) with eburnation (arrow head); B – Photomicrograph of the synovium of the total arthroplasty in patient with Alkaptonuria, showing ochronotic bodies in the synovium (arrow) and articular surface (arrow head). (H&E stain, 40X magnification).
Thumbnail
Table 1
Exogenous Ochronosis Reported in the US from 1983 to 2020.

Figure 2   A – Exogenous ochronosis. Case #2, 68-year-old female with hyperpigmented macules which did not respond to HQ 4% and tretinoin 0.05%. The macules gradually got darker and erythematous with surrounding hypopigmentation; B – Photomicrography of the skin biopsy of skin case #2, showing banana-like bodies (ochronotic bodies) in the superficial dermis (H&E, 100X magnification). 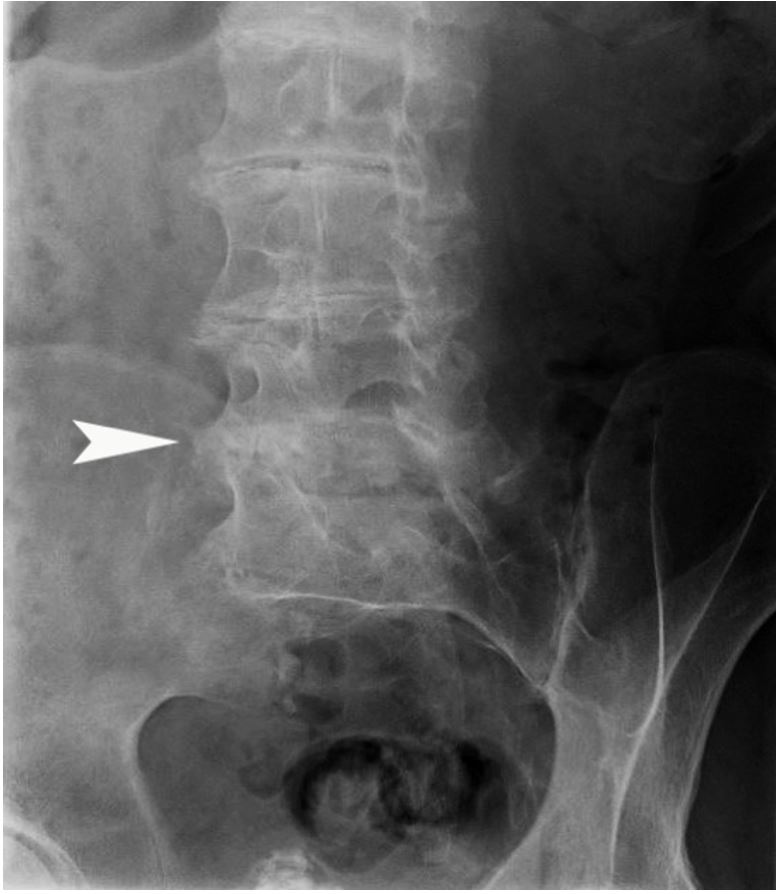