Victims and villains on reality shows in Brazil: representations and evaluation based on lexicogrammar evidences

The aim of this study is to analyze the representations constructed in opinion articles published in Brazilian newspapers from the lexicogrammar and semantic-discursive perspective. We have analyzed the lexicogrammar functions played by social actors selected from their recurrence in the corpus and evaluation marks to the representations identified. For this, we used the Systemic Functional Linguistics theory, focusing on categories of transitivity system by Halliday & Matthiessen (2004), forms of representation of social actors by van Leeuwen (1997) and the Appraisal by Martin & White (2005). The results show that the social actors that are most frequently present in the discourse are the opinion article writers, the reality show, the participants of the program and the audience. They appear sometimes activated, sometimes passivated, depending on the linguistic context to which they relate. The presence of linguistic traces of trial judgment and appreciation, often accompanied by gradation, indicates the negative valuations for the reality shows and their agents, while the use of marks of affection signals a defense of participants by the authorial voice. Like the participants of the program, the Brazilian audience is represented as a victim of the current Capitalist system, which is present in the dynamics of reality shows. 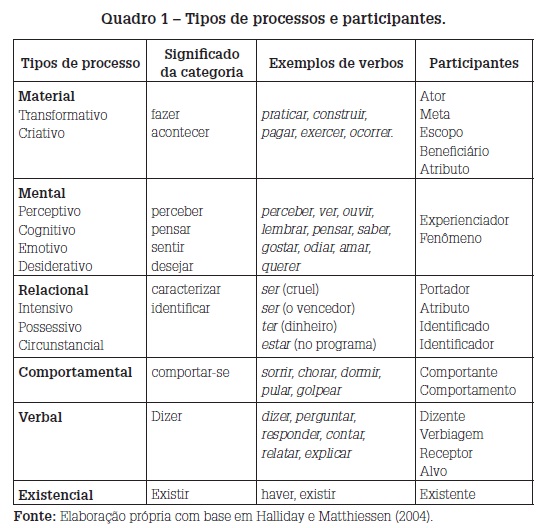