OBJECTIVE: To analyze retrospectively a series of patients with temporal lobe epilepsy (TLE) and mesial temporal sclerosis (MTS), and the association of patterns of hippocampal sclerosis with clinical data and surgical prognosis.

RESULTS: Occurrence of initial precipitating insult (IPI), as well as better postoperative seizure control (i.e. Engel class 1), were associated with classical and severe patterns of hippocampal sclerosis (MTS type 1a and 1b, respectively).

Mesial temporal sclerosis (MTS) is the most common pathological finding in drug refractory, chronic temporal lobe epilepsy (TLE)1. Mesial temporal lobe structures with a sclerotic hippocampus have been considered the site of seizure onset for most TLE patients, and hippocampal sclerosis (HS) has been considered essential for MTS diagnosis. Surgery has become the treatment of choice in the management of patients with this epilepsy syndrome2,3. Tailored resections of temporal neocortex and mesial temporal structures, including hippocampus and amygdala, are an established epilepsy treatment modality and offer a favorable outcome in approximately two-thirds of patients4,5.

The reason why around one-third of individuals with this epilepsy syndrome still present seizures after surgical treatment has been a matter of debate6. Among other factors, it has been suggested that different patterns of neuronal cell loss within hippocampal subfields may be implicated in surgical results6,7.

The aim of this study was to analyze retrospectively a series of 66 patients with TLE and MTS, as well as investigate the association of clinical data, patterns of HS and surgical prognosis.

Sixty-six consecutive patients, 33 men (50.0%), mean age 37±11.41 years, with medically refractory TLE with unilateral MTS on MRI, 36 (54.5%) with right- and 30 (45.5%) with left-hippocampal resections, were included in this study. Diagnosis was established according to previously reported clinical and electrographic characteristics2. Patients who did not achieve seizure control despite of adequate use of at least two first-line antiepileptic drugs (AEDs), in mono or polytherapy, and up to toxic levels, were qualified as medically refractory. The study was approved by the Ethics Committee of our institution (CEP 2009/10) and informed consent was given from all patients.

Clinical features were retrospectively recorded according to a specific protocol developed for this study. Presence and age of initial precipitant insult (IPI) defined by Mathern et al.8, age at onset of habitual seizures, defined as the age at which habitual and recurrent seizures developed, as well as duration of epilepsy, were registered. The duration of epilepsy was defined as the interval between the age at onset of habitual seizures and the time of surgery. Average frequency of preoperative complex partial seizure per month and the mean number of generalized tonic-clonic seizures (GTCS) throughout lives, classified in > or <20, were also registered.

Prolonged non-invasive video-EEG monitoring was performed on a 32-channel digital equipment (Biologic® and Ceegraph® software). Electrodes were placed according to the 1020 International System, plus intermediary temporal and sphenoidal electrodes. In order to record ictal events, AEDs were tapered off or completely withdrew at physician's discretion. The frequency and location of interictal epileptiform discharges were visually assessed on 5-minute EEG samples per hour, 24 hours per day, and ictal EEG recordings were also analyzed.

When concordant data was obtained in this evaluation, including neuropsychological assessment, a surgical resection was performed. Surgical procedure consisted on a resection of 3.5 cm of temporal neocortex from temporal pole on dominant hemisphere (4.5 cm from the non-dominant) associated with a 3.5 cm resection of hippocampus and two-thirds of amygdala. All patients were followed-up for at least six months after surgery, and seizure control was defined according to Engel classification4.

The hippocampi of all patients were collected from the period of 2005 to 2011 from the archives of neuropathology, and those with less than three subfields or without CA1 and/or CA4 sectors represented in the tissue were excluded.

Five-mm-thick slices along the hippocampus anteroposterior axis were dissected, fixed overnight in 4% formalin and processed into liquid paraffin. A single block corresponding to the mid hippocampal body was selected from each case for histopathological examination9 and cut at 7 µm (Leica, Germany), expanded in hot water, mounted on slides coated with silane and air-dried at 56ºC overnight in an incubator. Two slides of each case were deparaffined in xylol and descending alcohol concentration. One was stained with hematoxylin and eosin (HE) for pathological diagnosis, and the other was submitted to an automated staining apparatus (Autostainer Link 48, Dako, USA) for NeuN immunohistochemistry (Chemicon, Temecula, USA, dilution 1:1000, pretreated in PT Link equipment, Dako, USA) and counterstaining with hematoxylin. All tissue specimens were qualitative and quantitative analyzed by two independently observes (AJ and RN) both in NeuN and HE stained slides.

Thirteen hippocampi specimens obtained from autopsy of neurologically healthy subjects without a history of epilepsy served as controls (mean age 57.6±14.34 years). HE and NeuN staining method were carried out on the postmortem tissue. There was no difference accuracy between control's HE- and NeuN-stained sections as reported in previous studies6,7.

Values of neuronal cell counts from each hippocampal subfield were transformed into Z-scores. Z-score is the number of standard deviation from the mean expected value, which in this case is the mean controls subfields density values, and is calculated according to Z = (score - mean of the control)/standard deviation of the control population. Results that are more than two standard deviation away from the mean expected value were considered abnormal; only negative Z-scores were relevant. The different patterns of HS were determined according to6: no MTS, Z-score <2 in all hippocampal subfields; MTS type 1a, Z-score <2 in CA2, but >2 in remain sectors; MTS type 1b, Z-score >2 in each subfield; MTS type 2, Z-score >2 in CA1 and <2 in CA4; MTS type 3, Z-score >2 only in CA4.

To analyze the importance of clinical data on the different patterns of HS, variance analysis with one-way ANOVA was chosen. Statistical evaluation was carried out in SPSS 10.0 for Windows, version 10.01, and p values <0.050 were considered as statistical significant.

Gender, side of resection, age at surgery and mean age at epilepsy onset were closely similar among patients with distinct patterns of HS. Monthly seizure frequency and estimated lifetime GTCS did not show influence on severity of hippocampal cell loss (data not shown). Although not statistically significant, there were differences in mean duration of epilepsy between the MTS patterns (Table 2), with shortest duration of epilepsy to surgery for no MTS patients.

Within the surgical patients, 34 (51.5%) reported a history of initial precipitating insult (IPI) of whom 14 (41.2%) experienced complex febrile seizures, 12 (35.3%) afebrile seizures, five (14.7%) meningitis and three (8.8%) head trauma. Occurrence of an IPI was not reported among MTS type 2 and cases with no HS (Table 3). The age of IPI and the latent period between the preceding event and the onset of habitual seizures was not significantly different.

Forty-eight patients (72.7%) became seizure-free after surgery. The poorest outcome occurred in patients with normal hippocampal cell densities (no MTS) with all of them still presenting seizures at the last follow-up visit after surgery (Table 4). Better outcomes were observed for the MTS type 1a and MTS type 1b cases, with seizure relief ranging from 75.6 to 83.3%. Only 50.0% of patients with MTS type 2 achieved seizure freedom, while 25.0% patients remain showing rare disabling seizures (Engel 2) and the other 25.0% had a worthwhile improvement (Table 4).

Up to one-third of individuals with TLE still present seizures after surgical treatment10,11. The identification of prognostic factors in an attempt to better predict postoperative outcome is critical to select the best surgical candidates and to improve clinical management of epilepsy surgery.

The agreement records of the MRI, ictal and interictal EEG, neuropsychological tests and positron emission tomography pointing to a unilateral and localized epileptogenic zone have already been shown to favor surgical prognosis12-14.

Histopathological evaluation of the surgical specimens have also been suggested as a predictor of postoperative seizure control6,7,15. A favorable outcome has been related to a greater degree of hippocampal atrophy neuropathologically diagnosed as classical HS7,13,16. Otherwise, the atypical patterns of hippocampal neuronal loss may predict poorer outcome7,15,17. The identification of distinct patterns of HS may suggest different clinical histories and epileptogenic pathways, and disassociate HS as a single condition.

In this study, we applied a quantitative analytical method to determine the patterns of HS, according to Blümcke's classification7, in our surgical series. Despite electrophysiological evidence for TLE, three surgical specimens did not present specific neuronal cell loss. This finding has been reported in similar surveys1,6,7,15,18 and no long has been explained.

Despite our small cohort of patients, this is a pure series of TLE-MTS since individuals with a second potentially epileptogenic pathology (dual pathology) were excluded and all patients had been submitted to the same clinical case records and surgical procedure, excluding other influences on outcome. A possible disadvantage of our methodology is the fact that only a single section of hippocampus was analyzed. This section is thought to be representative of all hippocampal pathology, but patterns of HS could vary along the anteroposterior axis of hippocampus in some patients19, suggesting a possible pathological bias.

Our data are consistent with previous studies with regard to seizure frequency and age at surgery, suggesting no correlation between them and the pattern of HS7,20,21. Also, duration of epilepsy in our series is suggested to be shorter for patients with normal hippocampus6,7. Mean age of epilepsy onset did not show an influence on the patterns of neuronal cell loss, unlike reported by Thom et al.6.

IPI, considered as a necessary event to generate the pattern of HS associated with chronic epilepsy, is a central nervous system insult occurring up to six years of age. The controversy over the importance of the age of IPI as a good outcome predictor has been reported6,7. In our series, no association between age and type of IPI with severity of hippocampal pathology was found. In this survey, patients with hippocampal neuronal cell loss restricted to CA1 sector (MTS type 2) did not report a history of IPI, which might be due to a small number of cases presenting this pathology.

In our cohort of TLE patients, 72.7% became seizure-free after surgery, which is consistent with the majority of surgical series in literature22-25. The best outcome was achieved by MTS type 1a and MTS type 1b groups, reproducing previous reports6,7. In this series, any patients without hippocampal neuronal cell loss (no MTS) have a benefit from epilepsy surgery, contradicting earlier studies in which seizure-free outcome ranged from 4458%6,7,15. This can be justified by our small number of patients presenting MTS type 2 and normal hippocampal structure.

In conclusion, the analysis of hippocampal neuronal loss patterns immediately after surgery may be used as a predictor of long-term seizure outcome.

We are grateful for the assistance of Patricia G.A. Ramos in statistical analysis. The authors also thank FAPESP, CNPq and INNT  Instituto Nacional de Neurociência Translacional for supporting this study. 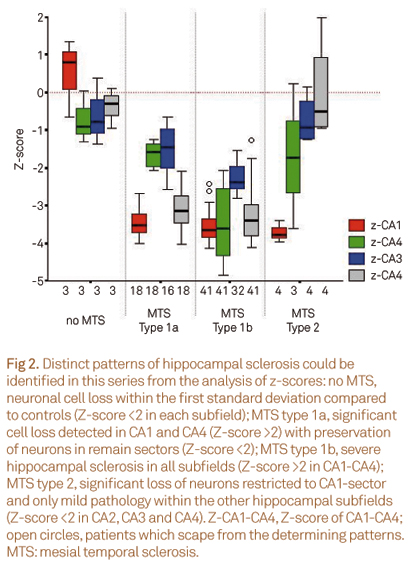 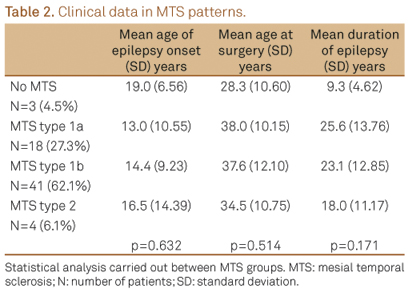