This work is a part of a long-term project that began in 1997 and which involves grain production based on crop rotation or crop succession systems. The experiment was carried out in the 2005/06 season, in a Dystroferric Red Latosol, in the Agrarian Science Experimental Farm of Federal University of Great Dourados - UFGD, in Dourados, Mato Grosso do Sul, Brazil. The experimental design was in randomized blocks with seven treatments and three replications. In each parcel, 26 rows of soybean were sowed, 36 m long, spaced 0.45 m apart. Treatments consisted of seven systems of rotation or succession, involving species that were sowed alone or mixed with species that preceded soybean, comprising the following treatments: System 1: crotalaria + vetch /soybean; System 2: vetch +oat + turnip/soybean; System 3: sunflower/soybean; System 4: millet/soybean; System 5: corn/soybean; System 6: wheat/soybean; and System 7: oat/soybean. Plant height, insertion height of first pod, number of plant ramifications, number of pods per plant, soybean yield, and mass of 100 grains were evaluated. It was concluded that in a no-tillage consolidated system, various species can be used in rotation or succession with soybean, without affecting the components of the leguminous yield. 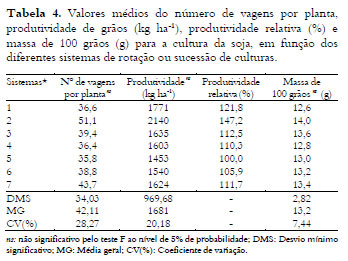