The karyotypes of three armored catfish species (Loricariidae) from the Iguaçu river, southern of the Brazil, were compared using different techniques: C-banding, Ag-NOR and fluorescence in situ hybridization (FISH), which used 5S and 18S rDNAs and total Cot-1 fraction as probes. Hypostomus commersoni and Hypostomus derbyi presented 2n = 68 chromosomes, with karyotype formulae 12m+12sm+14st+30a and 12m+12sm+10st+34a, respectively; whereas Hypostomus myersi presented 2n = 74 chromosomes and 12m+16sm+12st+34a. The chromosomal localization of the Ag-NORs, 5S and 18S rDNAs differed in number of sites and chromosomal localization among the studied species. The total Cot-1 probe permitted the visualization of the repetitive DNA fraction in karyotypes of each species. Cross-hybridizations using total Cot-1 probe revealed that these species have repetitive DNAs in common. However, this does not occur in H. commersoni in relation to the other species. The apparent karyotype similarity suggests a close relationship between the sympatric H. commersoni and H. derbyi species, but the small differences detected in the examined chromosomal markers indicate evolutionary divergence due to gene flow restriction among them. Hence, the present findings indicate different composition of repetitive sequences among studied species, which permit to infer its role in chromosomal differentiation of Hypostomus.

Figure. 1   Map of Brazil, highlighting the state of Paraná and the Iguaçu river drainage. The circle refers to sampled collection region at União da Vitória. 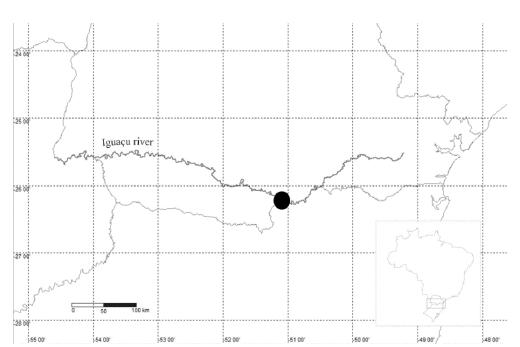