Imbalance in the resident microbiota may promote the growth of opportunistic microorganisms, such as yeasts of Candida genus and the development of diseases, especially in aged people. This study evaluated whether the consumption of the probiotic Yakult LB® (Lactobacillus casei and Bifidobacterium breve) was able to influence on the specific immunological response against Candida and on the presence of these yeasts in the oral cavity of 42 healthy aged individuals. Saliva samples were collected before and after the probiotic use for 30 days, 3 times a week. The samples were plated in Dextrose Saboraud Agar with chloramphenicol, the colony-forming units (CFU/mL) were counted and the Candida species were identified. Anti-Candida IgA analysis was conducted using the ELISA technique. ANOVA and Student's t-test were used for normally distributed data and the Wilcoxon test was used for data with non-normal distribution (α=0.05). The results showed a statistically significant reduction (p<0.05) in Candida prevalence (from 92.9% to 85.7%), in CFU/mL counts of Candida and in the number of non-albicans species after consumption of the probiotic. Immunological analysis demonstrated a significant increase (p<0.05) in anti-Candida IgA levels. In conclusion, probiotic bacteria reduced Candida numbers in the oral cavity of the elderly and increased specific secretory immune response against these yeasts, suggesting its possible use in controlling oral candidosis. 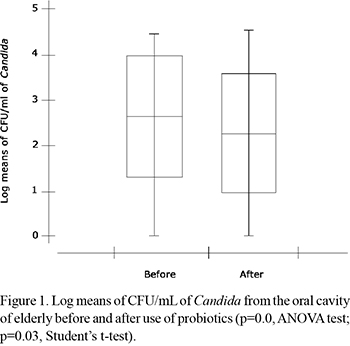 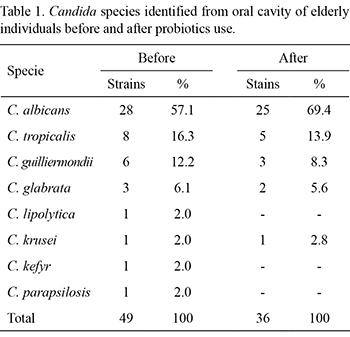