The involvement of the esophagus in tuberculosis (TB) is extremely rare. This is a case report of an immunocompetent male patient, who presented ganglionary TB reactivation, with the development of extensive esophageal ulcers. The endoscopic approach made the diagnosis possible and there was a total resolution of the symptoms after the treatment.

The involvement of the esophagus in tuberculosis (TB) is extremely rare. This is a case report of an immunocompetent male patient, who presented ganglionary TB reactivation, with the development of extensive esophageal ulcers. The endoscopic approach made the diagnosis possible and there was a total resolution of the symptoms after the treatment.

Gastrointestinal tuberculosis is very little frequent, accounting for 1% to 3% of total diagnosed cases [1,2]. Reported cases with symptoms related primarily to the esophagus are even rarer, totaling just 3% of total patients with gastrointestinal tuberculosis [3]. Esophageal lesions usually develop in previously abnormal mucous membrane. Most esophageal TB stem from the dissemination of adjacent structures [4,5]. The most common symptom is dysphagia, although odynophagia and weight loss may also be present [6,7].

This is a case of a previously healthy 39-year-old Caucasian male patient. He presented initially a constant gradually intensive thoracic pain on the right side 3 weeks before, with relief on genupectoral position. A week afterwards he showed odynophagia and progressive dysphagia, even for liquid. He reported evening fever and episodes of nocturnal sudoresis. He lost 5% of his initial 84 kg body mass. No tuberculosis contact reported.

He was submitted to esophagogastroduodenoscopy (EGD), chest X-ray and echocardiography, all showing no alterations. Because of his presumed viral pericarditis diagnosis, it was prescribed Aspirin 4 g/day and Ranitidine 300 mg/day for him. He was hospitalized because of his intense chest pain and audible pericardic rub all over the precordial region. Investigation showed a barium esophagogram with a reduction in the organ distensibility and probable expansive intramural or extrinsic lesion (Figure 1a). The computed tomography (CT) showed an infiltrative-like lesion at subcarinal and retrocarinal level as well as extrinsic compression causing the esophagus to be dislodged to the left (Figure 1b). The endoscopic examination revealed large, deep, friable ulcers in the esophagus with abrupt borders, from the proximal to the distal third, with submucous tunnels, some of them communicating and linked by mucous bridges (Figures 2a, b and c ). The histopathological examination of the mucous biopsy showed ulcerate chronic inflammation, absence of granulomes or viral inclusions. The endoscopic ultrasonography (EUS) detected enlarged mediastinal lymph nodes and deep ulcers even reaching muscular layer of mucosa with loss of neighboring structures limitation (Figure 3). 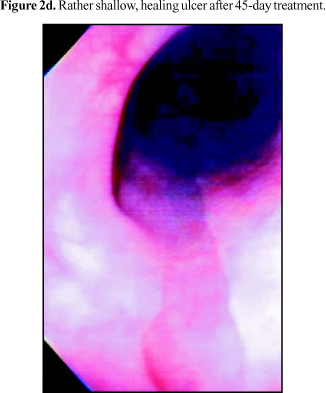 During the patient's stay in the hospital, he had to be nourished through a nasojejunal tube and administered intravenous proton-pump inhibitor.

With the diagnostic hypothesis of granulomatous disease, around 10 days afterwards, the EGD was repeated: it was possible to perceive that a few ulcers became apparently more superficial and new ones emerged due to the uncovering of the already mentioned mucous bridges. A mucous biopsy revealed the presence of granulomes, but negative staining for fungus and acid-fast bacilli (Figure 4). The bronchoscopy was normal and the bronchoalveolar lavage did not show acid-fast bacilli in the direct examination and cultures. 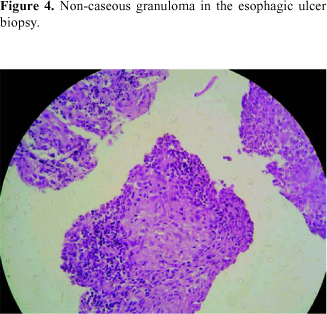 An empirical treatment with isoniazid, rifampin and pyrazinamid was initiated, having the patient shown a favorable clinic response: the fever disappeared and dysphagia improved.

The EGD accomplished 45 days from the beginning of treatment showed an important regression of the esophageal lesions with an almost complete cure of the mucous, just 2 extended ulcerations remaining, but superficial in the mid esophagus (figure 3-d). He showed a discreet residual dysphagia, but he had already recovered initial weight.

The digestive system is the sixth in the frequency order of occurrence of extrapulmonary tuberculosis [5]. Data from 2 studies on prevalence based on necropsies showed 3.72% of abdominal compromise and rare involvement of the esophagus (0.15%) [6,8]. Jain et al. reviewed 2176 patients with over 6-week dysphagia and found only 12 confirmed cases of tuberculosis as etiology of the symptom [9].

Although Brazil is among the 22 countries responsible for 80% of cases in the world, and that it has shown an average of 80 to 85 thousand new cases annually reported between 1990 and 2002 (14% of which of extrapulmonary origin), there is no publication record of esophageal TB originated in this country.

In cases of abdominal TB, around 75% show no evidence of pulmonary involvement. The digestive segment most frequently affected is the ileocecal region, probably due to the greater density of the lymphatic tissue [5]. In contrast, the frequency of esophageal involvement verified is low, even considering its proximity with the most frequently affected organs, the lungs and mediastinum, and the fact that the esophageal mucous is exposed to the contaminated sputum swallowed [8].

The esophagus primary tuberculosis may develop in adults by the reactivation of a focus resulting from the lymphohematic dissemination of the primo-infection. The esophagus may be secondarily affected by the prolonged swallowing of sputum contaminated with bacilli from pulmonary tuberculosis or, by contiguity, a tuberculous mediastinal lymph node that grows, invades and pierces the esophagus wall thus forming a fistula between them [10].

The radiological results showing extrinsic compression of the esophagus and the endoscopic aspect with ulcers in the medium third are in accordance with most cases previously found in the literature [7,11]. The CT showing extensive mediastinal ganglionary involvement and the strongly positive tuberculosis test, as it commonly occurs in ganglionary tuberculosis, are strong signs of the ethiopathogeny of the lesions found. It is worth mentioning that the tissue specimen culture, although not applied, is considered golden pattern for diagnosing extrapulmonary tuberculosis and the employment of molecular biology techniques (PCR) on biopsies may facilitate and shorten an accurate diagnosis [6,12].

In this case, there was no initial etiologic corroboration of TB, being the diagnosis based on clinic history data (fever, emaciation, nocturnal sudoresis) associated to positive tuberculosis test, to the presence of granuloma with absence of fungus in the endoscopic biopsy and mainly to the quick clinic improvement associated to the clinic resolution and regression of the esophageal lesions with the beginning of the tuberculostatics, associated to the clinic resolution with no sequels with the end of treatment.