Hypothyroidism due to Hashimoto's thyroiditis (HT) is the commonest autoimmune endocrine illness in which antibodies against thyroid organ result in inflammation. The disease has a complex etiology that involves genetic and environmental influences. Viral infections may be involved in triggering of the disease as their molecular mimicry enhance autoimmune responses. Human herpesvirus-6 (HHV-6) is recognized for its contribution to some autoimmune diseases.

In the current study, the prevalence of HHV-6 active infection in patients with HT and with non-autoimmune thyroid disorders were compared with patients with euthyroidism. In addition, a correlation between presence of HHV-6 infections and HT was investigated.

A total of 151 patients with clinically and laboratory confirmed HT, 59 patients with non-autoimmune thyroid disorders, and 32 patients with normal thyroid function were included in the study. For further confirmation of HT disease, all the precipitants were tested for anti-thyroid peroxidase (TPO), and anti-thyroglobulin (TG) antibodies. For detection of both HHV-6 types A and B, nested PCR and restriction enzyme digestion were used. HHV-6 DNA positive samples were further investigated by DNA sequencing analysis.

HHV-6A DNA was found in serum sample of 57 out of 151 patients (38%) with HT, which was significantly more often than in patients with non-autoimmune thyroid disorders (p = 0.001). However, HHV-6 DNA was not detected in serum samples of euthyroid subjects.

The results support a possible role for active HHV-6A infection, demonstrated by the presence of HHV-6 DNA in sera, in the development of HT.

The presence of HHV-6B and HHV-6A DNA in the plasma sample both indicates active infection, though HHV-6B is more likely to go into latency in peripheral blood mononuclear cells (PBMCs). Although HHV-6B DNA is detected in PBMCs of both patients and healthy individuals, analysis of serum samples indicated that none of the healthy blood donors were positive for HHV-6 DNA.2020 Alvarez-Lafuente R, Martín-Estefanía C, de Las Heras V, et al. Active human herpesvirus 6 infection in patients with multiple sclerosis. Arch Neurol. 2002;59:929-33, http://www.ncbi.nlm.nih.gov/pubmed/12056928. Accessed March 13, 2019.
http://www.ncbi.nlm.nih.gov/pubmed/12056... Considering that a possible relationship exists between infection with human herpesvirus 6 (HHV-6) and autoimmune diseases, the purpose of this study was to determine the prevalence of HHV-6A/B DNA in serum of patients with HT, non-autoimmune thyroid disorders, and patients with normal thyroid gland function (euthyroid) to identify if HHV-6A/B active infection may be a possible risk factor for triggering HT disease.

Thyroiditis were classified based on the American Thyroid Association definition. Based on clinical, laboratory, and ultrasonography findings, 151 patients with a definite diagnosis of HT, 59 patients with non-autoimmune thyroid disorders, and 32 subjects with normal thyroid gland function were included in the study. To confirm the results, thyroid function tests were repeated prior to taking any drug that could possibly affect thyroid function. None of them had concomitant diseases.

The patients were initially diagnosed with thyroiditis in routine clinical practice by general practitioners and referred to the endocrinology clinic of the University Hospital for further investigation. The study was approved by the University Ethics Committee. Informed consent was collected from all participants before sample collection.

Blood samples were collected in serum gel separator tubes and were then centrifuged to separate the serum and stored in a sterile tube at −20ºC until use.

Total DNA was isolated from the serum samples with the use of DNeasy Blood & Tissue Kit (Qiagen, Germany) according to the manufacturer's protocol. The DNA was then re-suspended in a final elution buffer volume of 50 µL and stored at −20ºC until further analysis.

The presence of HHV-6 DNA in serum samples was detected by nested PCR with primers designed to specifically targeting U67 gene in a region, a conserved between HHV-6A and HHV-6B. For the amplification of HHV-6 DNA, the outer primers (PF1: 5'GCTAGAACGTATTTGCTG3'; PR1: 5'ACAACTGTCTGACTGGCA3') which amplify a fragment of 252 base pairs (bp) and the inner primers (PF2: 5'CTCAAGATCAACAAGTTG3'; PR2: 5'TCACGCACATCGGTATAT3') which amplify a fragment of 154 bp were used. Primer-BLAST was performed to check the specificity of the primers (https://www.ncbi.nlm.nih.gov/tools/primer-blast/).

For the amplification of target genes, PCR was run in two separate steps. To amplify a 154 bp DNA fragment of the major capsid protein (MCP) of HHV-6A and HHV-6B genotype genes, the first round of PCR amplification was carried out with 2 µL of extracted DNA from serum samples, 1× PCR master mix, and 0.5 µM of each outer primers in a final volume of 20 µL. To construct the plasmid control for HHV-6A and HHV-6B, the PCR product fragments of HHV-6A and HHV-6B isolated from clinical samples and confirmed by DNA sequencing, U67 fragments were amplified as follows: initial denaturation at 95ºC for 5 min, 35 cycles of 95ºC for 30 s, 50ºC for 30 s, and 72ºC for 30 s, followed by a final extension at 72ºC for 5 min.

The second round of PCR was performed as mentioned for the first round, except that one microliter of the first PCR product was added to the second PCR reaction mixture. The PCR products were analyzed on 2% agarose gel electrophoresis and stained with GelRed TM (Biotium, UK), and visualized under UV light.

To test for possible plasmid contamination, PCR reaction was performed using T7 universal primer of pTZ57R/T vector 5'TAATACGACTCACTATAGGG3' and PF1 primer of HHV-6 5'GCTAGAACGTATTTGCTG3' that amplify a 320 bp fragment including a portion of HHV-6 and T7 promoter sequences. In addition, extensive precautions were used to prevent PCR contamination. To ensure efficient DNA extraction and PCR amplification, a 177-bp fragment of the human β-actin gene was amplified together with the samples using 5'ATCGTGCGTGACATTAAGGAG3' and 5'GAAGGAAGGCTGGAAGAGTG3' primers.

The sensitivity of nested PCR assays

To evaluate the sensitivity of HHV-6 PCR detection, a set of serum sample negative for HHV-6A and HHV-6B DNA were spiked with known 10-fold serial dilutions of HHV-6 A and HHV-6B DNA in a separate reaction. After DNA extraction, two stages of consecutive amplification were used for each virus separately. The product of the first-round amplification (252 bp) was used as targets for the second round of nested PCR (154 bp) amplification. The last positive dilution of the first-round PCR product (252 bp) and dilutions which in the first round PCR failed to yield a PCR product were used as targets for the determination of the second round of nested PCR sensitivity test (154 bp). The amplified products were then analyzed by gel electrophoresis and GelRedTM (Biotium, USA) post-staining.

To investigate the specificity of PCR, the amplified products were subjected to nucleotide sequencing analysis. To verify the accuracy of sequence determination, each nested PCR product was gel purified and cloned into pTZ57R/T plasmid vector. Sequence analysis was performed (150-200 ng/µL) in both forward and reverse directions using specific primers by ABI 3730XL DNA analyzer (Bioneer, Inc.).

A 154 bp fragment of the U67 gene was amplified. This fragment includes an XhoI restriction site in the HHV-6A genome absent in type B. XhoI digestion was performed on the PCR product, producing two fragments of 105 and 49 bp for HHV-6A. The procedure was performed according to the manufacturer's instruction (Thermo scientific).

Overall, 242 patients were enrolled in the study. The demographic characteristics of patients and the results of thyroid function tests are shown in Table 1.

Anti-IgG in patients with Hashimoto thyroiditis and in control groups

Serum samples collected from 151 HT patients and 59 patients with non-autoimmune thyroid disorders as well as 32 euthyroid patients were analyzed for the presence of HHV-6 DNA by nested PCR using primers specific for a highly conserved sequence of U67 gene corresponding to the major capsid protein gene of HHV-6A/B. When evaluated by gel electrophoresis and GelRed staining, the lower limits of detection using nested PCR assay for HHV-6A/B DNA were determined to be five copies/reaction of HHV-6A or HHV-6B DNA.

To ensure impartiality, and avoid errors arising from bias, all the samples were analyzed in double-blind tests. HHV-6 DNA was detected in the serum sample of 57 out of 151 (38%) patients with HT, in contrast to five out of 59 (8%) patients with non-autoimmune thyroid disorders and 0/32 (0%) in euthyroid subjects. The prevalence of HHV-6 DNA in HT patients compared to that of the two other control groups was significantly different (p = 0.001). Distribution of HHV-6 DNA in serum samples of the patients is shown in Table 1.

The primers were not able to differentiate between the two types on the basis of the size of the PCR product. For discriminating between HHV-6A and HHV-6B, restriction endonuclease XhoI and nucleotide sequences were used. In all samples positive for HHV-6 DNA detected in patients either with HT or non-autoimmune thyroiditis diseases, where accurate typing result was achieved, the virus was HHV-6 type A.

In addition, the obtained sequences were subjected to a BLAST search against the GenBank database for the HHV-6A (accession no. NC_001664.4) and HHV-6B (GenBank accession no. MH698402.1) (Fig. 1). A type was assigned to each sample based on the homology of our sequence data with published sequences in GenBank as shown in Fig. 1.

The important role of HHV-6 infection in association with autoimmune HT has generally been considered in a recent study.1313 Caselli E, Zatelli MC, Rizzo R, et al. Virologic and immunologic evidence supporting an association between HHV-6 and Hashimoto's thyroiditis. PLoS Pathog. 2012;8:e1002951. The virus was detected in 82% fine needle aspirations from HT patients. However, HHV-6 DNA was found only in 10% of the samples from patients with benign thyroid lesions. Interestingly, all samples that tested positive for HHV-6 DNA were found to be HHV-6A type, indicating that HT possibly is associated with HHV-6A infection and not with the more common HHV-6B. The evidence associated with infected thyroid cells with HHV-6 indicates that they are susceptible to natural killer cells. Therefore, the involvement of the virus in the induction of autoimmunity in HT would be expected.

Interestingly, the variant analysis performed by XhoI restriction enzyme and DNA sequence analysis of HHV-6 DNA positive subjects indicates that all samples harbored HHV-6A, suggesting an association between thyroid diseases, in particular, HT to this virus.

Alternatively, detection of HHV-6 DNA by PCR in the serum sample is a useful indicator of active infection. However, HHV-6 DNA is not always present in plasma when the virus is active in a distant lymphoid tissue or organ.3232 Achour A, Boutolleau D, Slim A, Agut H, Gautheret-Dejean A. Human herpesvirus-6 (HHV-6) DNA in plasma reflects the presence of infected blood cells rather than circulating viral particles. J Clin Virol. 2007;38:280-5.

To clarify the association and possible role of HHV-6 as a trigger of HT, further studies are required. Several mechanisms have been suggested in which HHV-6 infections might induce an autoimmune response. However, quantification of HHV-6 viral loads in whole blood or serum samples of HT patients in association with measuring of anti-TPO antibody titer will support the role of HHV-6 active infection as a potential trigger of thyroid disease.

The authors wish to thank Ms. Kristin Loomis, president & executive director at the HHV-6 Foundation for her invaluable assistance in editing this manuscript. 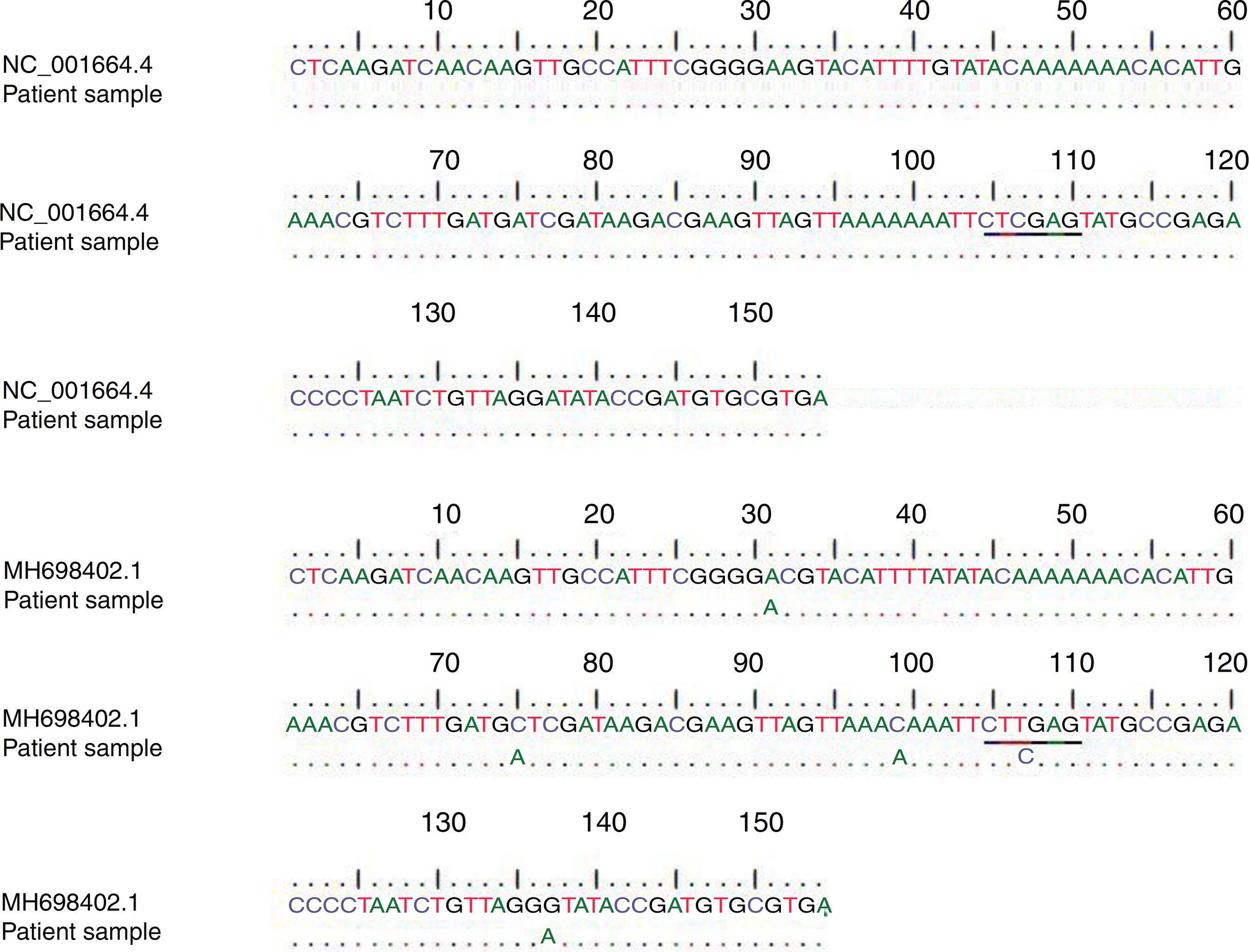