Penicillium brevicompactum is a filamentous fungus that presents a potential for industrial use due its efficient pectinase production. A heterologous transformation system was developed for P. brevicompactum based on the complementation of a nitrate reductase mutant. Nitrate reductase mutants were obtained by resistance to chlorate in a rate of 23.24% when compared to other mutations that lead to the chlorate resistance. One mutant named 4457-18X was chosen for the transformation experiments with the pNH24 vector containing de Fusarium oxysporum nitrate reductase gene. A frequency of approximately 3 transformants/µg DNA was obtained using the circular vector pNH24. This frequency was multiplied about 10 fold using the linearized vector with the Xba I restriction enzyme. Southern analysis of the transformants showed a tendency of the linearized vector to diminish the number of integrations compared to the use of the circular vector. The integration was random and stable in the analyzed transformants. The establishment of a transformation system for P. brevicompactum is fundamental for genetic manipulation of this microorganism. 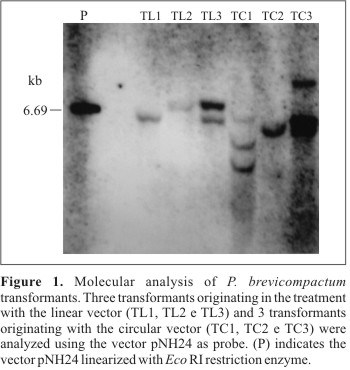 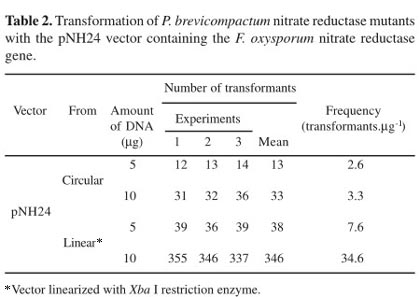