Salmonella spp. has long been recognised as a common cause of foodborne gastroenteritis in humans (Centers for Disease Control and Prevention, 2009) and responsible for significant economic losses in the food industry (Hum-phrey, 2004). Although Salmonella gastroenteritis may be caused by any of more than 2,500 serotypes (Kangas et al., 2007), S. Enteritidis remains one of the main causes of foodborne illness, and is considered one of the most important pandemic zoonosis produced under natural conditions (Araya et al., 2010; Matheson et al., 2010). It has been reported that a well characterised pathogenic S. Enteritidis strain (SE86) was involved in many foodborne outbreaks in the State of Rio Grande do Sul (RS), the southernmost state in Brazil (Geimba et al., 2004; Moura et al., 2001; Oels-chla-e-ger, 2010). In addition, SE86 has been reported to undergo acid adaptation, as characterised by: increased acid and thermal resistance (Araya et al., 2010) higher survival rates in simulated gastric fluid (Bernardeau et al., 2008), and better intestinal colonisation in mice (Borowsky et al. 2007; Malheiros et al., 2009; Perez et al., 2010).

The reduction of infections caused by foodborne pathogens such as S. Enteritidis is of great importance for public health. Treatment of salmonellosis is carried out mainly with fluid replacement, and the antibiotics are only recommended for extra-intestinal infections and exceptional cases. The possibility of using probiotic bacteria for protection against enteropathogenic infections has been considered (Gibson et al., 2005; Roselli et al., 2006). Probiotics are defined as live microorganisms that, when ingested in appropriate amounts, confer a health benefit to the host (FAO/WHO, 2001). Probiotic bacteria can play a role in defense and recovery from enteropathogenic infections (Candela et al., 2008; Servin, 2004), especially by protecting the host from enteropathogen colonization, and by modulating the host immune response (Resta-Lenert and Barrett, 2003).

The most widely used probiotic bacteria, and more relevant to the prevention of tissue infection by entero-pathogens are Bifidobacterium and Lactobacillus (Candela et al., 2008; Fooks and Gibson, 2002; Guarner and Malge-lada, 2003). Among the Lactobacillus species, L. acidophilus, L. plantarum, L. bulgaricus, L. casei, and L. rhamnosus have been frequently used. These Gram positive bacteria are natural inhabitants of the gastrointestinal tract, which they colonize by adhering to the intestinal epithelium, where they produce lactic acid and effectively act as probiotics (Bernardeau et al., 2008). L. acidophilus has been reported to be capable of stimulating the defense mechanisms of the immune system by colonizing the gastrointestinal tract and preventing the adhesion of many enterotoxigenic and enteroinvasive bacteria (Moura et al., 2001).

Based on these findings, the goal of this study was to evaluate the ability of a probiotic L. acidophilus LA10 to exert antagonistic effects against S. Enteritidis SE86 in mice.

Conventional male Swiss mice, 21-23 days of age, were used in this work. The animals were individually housed, supplied with potable water and commercial animal feed ad libitum, at 22 °C ± 2 °C, with 65% at 70% humidity and alternate 12 h periods of light and dark. All experimental procedures were carried out according to standards set forth by the Ethics and Research Council of the Universidade do Oeste de Santa Catarina, protocol number 017/2008.

S. Enteritidis SE86 was isolated from a cabbage involved in a foodborne outbreak occurred in 1999 in Rio Grande do Sul (RS) State, in Brazil. This strain shows the same genotypic profile as more than 90% of the S. Enteritidis involved in foodborne salmonellosis in RS State during the period between 1999 and 2002 (Geimba et al., 2004; Oliveira et al., 2007). Before the experiments, the SE86 was stored at -18 °C in 50% (v/v) glycerol. Working cultures were kept at 4 °C on BHI agar plates (Merck, Darmstadt, Germany), and subcultured in tubes containing BHI (Merck, Darmstadt, Germany) broth at 37 °C for 24 h.

Capsules of liophylized L. acidophilus LA10 were acquired in a pharmacy located in São Miguel do Oeste, State of Santa Catarina, Brazil. The capsule contents were diluted in 1 mL of sterile distilled water resulting in 108 cells/mL.

Experimental groups were divided into two (Group 3 and Group 4). Group 3 mice were first challenged with S. Enteritidis SE86, and after 10 days, were treated with L. acidophilus LA10.Group 4 mice were first administered with L. acidophilus LA10,and after 10 days, were challenged with S. Enteritidis SE86.Both groups were sacrificed 10 days after administration of the last micro-organism.

Fresh mice feces (1 g) were collected on the tenth day after administration of the microorganisms. Portions of the gastrointestinal tract (0.1 g of ileum and colon) were sampled at the tenth day after mice were sacrificed by cervical dislocation. The ileum and colon portions were homogenized into tubes containing 9.99 mL of buffered saline peptone water, while feces were homogenized in 9 mL of the same solution. Samples were homogenized for 2 min using an automatic mixer. Decimal dilutions were prepared and L. acidophilus LA10 cell counts were performed by spreading 1 mL of diluted feces (0.1 mL) or intestinal portions (0.01 mL) on plates containing Agar-Man-Rogosa Sharpe (MRS) (Merck, Darmstadt, Germany) and the pla-tes were incubated at 36 °C for 48-72 h in a microaerophilic incubator (Moura et al., 2001; Silva, Junqueira and Silveira 1997). Typical colonies were confirmed using biochemical tests (Macfaddin, 2000).

Statistical analysis was performed using the Chi--square and Pearson correlation coefficient to assess population levels. The level of significance was set at p < 0.05 using the statistical package SPSS, Version 12 for Windows.

Our results confirmed that mice from Group 1 (negative control) did not contain SE86 in the gastrointestinal tract or in feces. In contrast, in Group 2 mice (positive control) challenged with SE86, the colon was clearly colonized, with counts between < 30/g and > 11000/g (arithmetic mean, 3760 MPN/g). Feces from these Group 2 mice displayed counts varying from 9.2 to > 1100/g (arithmetic mean, 593 MPN/g), and ileum counts varying from < 30/g to 230/g (arithmetic mean, 78 MPN/g). Similar results were reported by Perez et al. (2010), who found that SE86 was able to infect the gastrointestinal tract of rats and spread into the feces.

According to Llana et al. (2009), salmonellosis in the rat has many similarities with the disease in humans. The study of Lahiri et al. (2010) showed that, immediately after infection, Salmonella were found preferentially associated with Peyer's patches in the terminal ileum, which is thought to be the main site of colonization/invasion. Thus, rats may be useful to study mechanisms of infection by these pathogenic bacteria (Rodenburg et al., 2007b). Rodenburg et al. (2007a) reported that Salmonella tend to remain in the gastrointestinal tract during all stages of infection, and that a relatively high number of cells persist in the intestine after contamination with the pathogenic bacteria. The same researchers Rodenburg et al. (2007a) suggested that S. Enteritidis is able to translocate to the small intestine, and induce gene expression changes in the ileal mucosa and Peyer's patches. However, the effects of Salmonella on colonic gene expression in vivo are largely unknown.

In Group 3 (which was first challenged with S. Enteritidis SE86 and after 10 days treated with L. acidophilus LA10 we observed that the mice showed no SE86 in their intestinal portions (either the ileum or colon). In this group, the mice eliminated the pathogenic bacteria in their feces (Table 1). The correlation between counts of L. acidophillus LA10 and S. Enteritidis SE86 was inversely proportional (Figure 1), with a medium high negative correlation for feces (-0.6831), and medium negative correlation in the colon (-0.2822) and ileum (-0.3893).

In Group 4 (which was first treated with L. acidophilus LA10 and after 10 days challenged with S. Enteritidis SE86), colonization by pathogenic bacteria was higher in the colon, followed by the ileum and feces (Ta-ble 2). The correlation between counts of L. acidophilus LA10 and S. Enteritidis SE86 was again inversely proportional (Figure 1) as in Group 3, with a medium high negative correlation in the feces (-0.5524), and a medium nega-tive correlation in the colon (-0.2011) and ileum (-0.1527).

Havelaar et al. (2001) reported that intestinal colonization by S. Enteritidis is concentrated in the distal ileum and caecum, and may be detected by fecal excretion. Lahiri et al. (2010) suggested that the terminal ileum is the primary site of Salmonella infection. However, Rodenburg et al. (2007a) showed that, in addition to the ileum, the colon mucosa is clearly a target for Salmonella infection, which could explain the increased colonization by S. Enteritidis SE86 found in the colon in this study (group 4). Also, Vender and Marignani (1983), found multiple ulcerations caused by Salmonella in the distal transverse colon and proximal descending colon in biopsies performed on humans with salmonellosis, highlighting the importance of studies investigating the infection process of this bacterium in the gastrointestinal tract, and specifically in the colon.

Comparing results obtained in Groups 3 and 4, we observed that after treatment with L. acidophilus LA10, the MPN of S. Enteritidis SE86 in the latter group was higher than in the former, although the counts of L. acidophilus LA10 remained in both groups between 106 and 107 cfu/g. These data were also confirmed statistically, and the correlation coefficient was higher in Group 3 in all intestinal portions evaluated, as well as in the feces (Figure 1).

The fact that the NMP/g of SE86 was lower in the experimental group first challenged with S. Enteritidis SE86 and after 10 days treated with L. acidophilus LA10 (Group 3) suggests that L. acidophilus LA10 is able to proliferate in the conditions of the gastrointestinal tract and colonize in high population levels in the gut ecosystem, demonstrating that this probiotic is an effective antagonist against S. Enteritidis SE86. The antagonistic activity of lactic acid bacteria against Salmonella infection has been studied elsewhere (Coconnier et al., 2000). Statistically, the best inverse correlation results were found in this group (Figure 1), emphasising that the administration of L. acidophilus LA10 after infection by S. Enteritidis SE86 showed better antagonist effects against this pathogenic bacteria (Tables 1 and 2).

The protection offered by L. acidophilus LA10 against pathogenic bacteria challenge is probably due to additional protection mechanisms provided by these intestinal microbiota and their properties as bio-therapeutic agents (Oelschlaeger, 2010). Similar results were reported by Mou-ra et al. (2001) and Silva et al. (1999) using L. acidophilus and Bifidobacterium, respectively. These authors observed that probiotics produce antagonistic substances against S. Enteritidis. However, this protection is not due to a reduction of the pathogenic populations in the intestines, but instead this bio-therapeutic agent may act through other protective mechanisms such as immu-no-modulation. In addition, other properties, such as competition for adherence sites, may also explain the protective effects of Lactobacillus against enteropathogenic bacteria (Oelschlaeger, 2010).

In conclusion, L. acidophilus LA10 showed antagonistic effect against S. Enteritidis SE86, suggesting that this probiotic can be used as a therapeutic tool against salmo-nellosis. This is an interesting result since S. Enteritidis SE86 has been identified as responsible for salmonellosis outbreaks since 1999 in Rio Grande do Sul State, southern Brazil.

All the content of the journal, except where otherwise noted, is licensed under a Creative Commons License CC BY-NC. 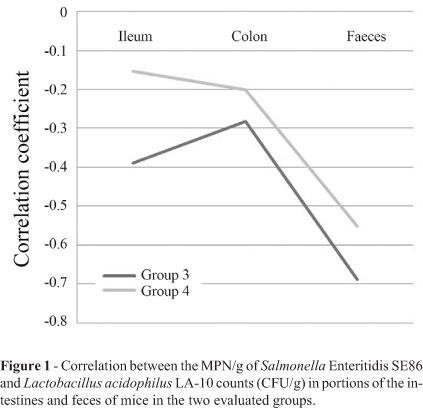