Conventional microbiological culture techniques are frequently insufficient to confirm endophthalmitis clinical cases which could require urgent medical attention because it could lead to permanent vision loss. We are proposing PCR-DGGE and 16S rRNA gene libraries as an alternative to improve the detection and identification rate of bacterial species from endophthalmitis cases.

Conventional microbiological culture techniques are frequently insufficient to confirm endophthalmitis clinical cases which could require urgent medical attention because it could lead to permanent vision loss. We are proposing PCR-DGGE and 16S rRNA gene libraries as an alternative to improve the detection and identification rate of bacterial species from endophthalmitis cases.

Microbiological endophthalmitis diagnosis is performed routinely by conventional microbiological culture techniques (CMCT) and microscopic examination of vitreous and aqueous humors. However, the sensitivity of bacterial detection from aqueous and vitreous humor using CMCT is low, ranging from 25% to 56% of cases (2, 4, 17). The low sensitivity of CMCT is due to various factors such as small quantity of specimen, fixation of microorganisms to solid surfaces (intraocular lens, lens fragments, capsule) and consequent decrease of cells in the vitreous/aqueous humor, use of antibiotics before the collection of clinical material and the presence of fastidious microorganisms such as agents causing endophthalmitis (17). The application of PCR-based molecular techniques increases significantly the cases of confirmed endophthalmitis and has prompted their growing utilization in this setting (3). PCRDenaturing Gradient Gel Electrophoresis (PCRDGGE) is a sensitive technique based on differential melting and separation of similar-sized PCR-amplicons in a linear urea-formamide gradient (15). PCR-DGGE has been employed as an alternative for bacteria detection in conjunctival samples (22,23), however, to our knowledge, this procedure has not been applied in vitreous samples from suspected endophthalmitis cases. Due to the high incidence of cases not detected by CMCT in vitreous samples, which require urgent medical attention since it could lead to vision loss, in this study we used a procedure based on PCR-DGGE in order to solve this problem.

The vitreous samples of 24 patients with postoperative endophthalmitis were obtained mainly by vitrectomy. All vitreous samples were previously analyzed by CMCT and there was no bacterial growth. This study was approved by the ethics review board from our institution, and patients was agreed with their participation in the study. Total vitreous DNAs were extracted from 20 µL of vitreous sample using DNeasy Tissue kit (Qiagen, CA, USA). The DNA extracted was used as template to amplify the V3 hypervariable region of the bacterial 16S rRNA gene by PCR according to Muyzer et al. (15). The PCR products were analyzed using a DCode mutation detection system, following the procedure described by the manufacturer (Bio-Rad Laboratories, Hercules, CA). Twenty µL of PCR samples were applied to 8% (w/v) polyacrylamide gels prepared in 1 x TAE buffer. The denaturing gradients contained 40-60% denaturant [100% denaturant corresponds to 7 M urea and 40% (w/v) formamide]. Electrophoresis was performed at 85 V and 60°C during 16 h. DGGE gels were fixed and DNA bands were visualized by silver staining.

DNAs corresponding to 17 vitreous samples from a total of 24, exhibited the expected fragment size of 16S rRNA gene (1500 base pairs), which indicated the presence of bacterial infection. The 7 PCR-negative samples may be explained by fungal infections. The 17 vitreous samples with bacterial infection showed a total of 8 different PCR-DGGE electrophoretic profiles (Figure 1), but only one sample was similar to S. epidermidis ATCC12228 and S. epidermidis skin-commensal strain profiles, utilized as controls (profile I, Figure 1). All lanes of the DGGE exhibited more than one band, some samples displaying up to 6 bands, suggesting the presence of at least 6 different bacteria present in such vitreous sample (Figure 1). For this reason, to explore the bacterial diversity associated with vitreous samples, eight 16S rRNA libraries were constructed for each DGGE representative profile according to Navarro-Noya et al. (16). A very low abundance of species was observed and only two species were demonstrated (Table 1). In five of the ribosomal gene libraries (corresponding to the DGGE-profiles II, III, V, VII and VIII) only Streptococcus pneumoniae was detected. In the three remaining libraries (DGGE-profiles I, IV and VI), S. epidermidis was the single detected microorganism (Table 1). The finding of a single bacterial species in each vitreous sample was unexpected, taking into account that several bands were observed in the PCR-DGGE. Furthermore, different PCR-DGGE profiles were obtained for S. epidermidis, suggesting that they are different strains of the same bacterial species. The same phenomenon occurred with S. pneumoniae. Similar results have been reported regarding the visualization of several bands on a DGGE gel, instead of a single band representative of particular species (6, 24). This result can be explained by the intraspecies heterogeneity displayed in a DGGE banding pattern as the result of multiple copies of the ribosomal genes and by the fact that the gene copies have evolved differently (6, 24). In order to provide a solution to that issue, some authors had successfully used the rpoB gene, encoding the beta subunit of RNA polymerase which exists in a single copy within the chromosome (6, 19). Also, PCR-DGGE in combination with specific PCR primers has been used for targeting the housekeeping gene glucose kinase, gki, to discriminate between different Streptococcus mitis strains (25). Another explanation for intraspecies heterogeneity could be that S. pneumoniae (18) and S. epidermidis (14) are considered microorganisms with a high level of genetic diversity.

In order to determine whether S. epidermidis detected in the vitreous samples was commensal or opportunist pathogen, we investigated the presence of some virulence factors associated to this bacterium. First, we confirmed the presence of S. epidermidis using two pairs of species-specific oligonucleotides, se705 sequence (11) and parC gene (1). The expected size PCR products were obtained from five vitreous samples and from two control strains (Table 1). Similarly, two additional genes associated with virulence factors (icaA (8) and mecA (10) genes) were amplified in the same fives vitreous samples but not in two control strains (Table 1). The icaA gene participates in biofilm development, one important factor in pathogenesis of this bacterium, while mecA gene is involved in resistance to methicillin antibiotic. Our results were similar to the reported by previous works, which have detected virulence factor genes in S. epidermidis strains isolated from clinical cases but not in commensal strains (8, 10, 12).

In this work, PCR-DGGE was applied in order to solve cases where CMCT were not able to infer bacterial presence in vitreous samples. The results presented here demonstrated that the 16S rRNA gene libraries and the profiles exhibited through PCR-DGGE are methods that could identify bacterial strains and displayed the intraspecies variation in both strains of S. epidermidis and S. pneumoniae. Furthermore, these results suggest that S. epidermidis infectious strains isolated from endophthalmitis were not of commensal origin. 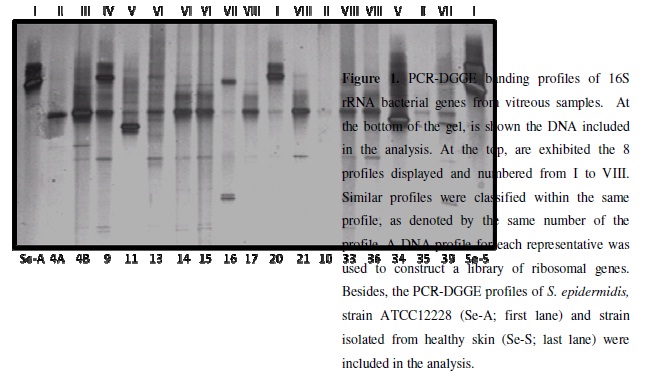