Reports of cyanobacterial blooms developing worldwide have considerably increased, and, in most cases, the predominant toxins are microcystins. The present study reports a cyanobacterial bloom in Lake Violão, Torres, Rio Grande do Sul State, in January 2005. Samples collected on January 13, 2005, were submitted to taxonomical, toxicological, and chemical studies. The taxonomical analysis showed many different species of cyanobacteria, and that Microcystis protocystis and Sphaerocavum cf. brasiliense were dominant. Besides these, Microcystis panniformis, Anabaena oumiana,Cylindrospermopsis raciborskii, and Anabaenopsis elenkinii f. circularis were also present. The toxicity of the bloom was confirmed through intraperitoneal tests in mice, and chemical analyses of bloom extracts showed that the major substance was anabaenopeptin F, followed by anabaenopeptin B, microcystin-LR, and microcystin-RR.

Reports of cyanobacterial blooms developing worldwide have considerably increased, and, in most cases, the predominant toxins are microcystins. The present study reports a cyanobacterial bloom in Lake Violão, Torres, Rio Grande do Sul State, in January 2005. Samples collected on January 13, 2005, were submitted to taxonomical, toxicological, and chemical studies. The taxonomical analysis showed many different species of cyanobacteria, and that Microcystis protocystis and Sphaerocavum cf. brasiliense were dominant. Besides these, Microcystis panniformis, Anabaena oumiana,Cylindrospermopsis raciborskii, and Anabaenopsis elenkinii f. circularis were also present. The toxicity of the bloom was confirmed through intraperitoneal tests in mice, and chemical analyses of bloom extracts showed that the major substance was anabaenopeptin F, followed by anabaenopeptin B, microcystin-LR, and microcystin-RR.

Cyanobacterial blooms are the massive proliferation of cyanobacteria in aquatic environments, when environmental conditions (such as light, temperature, nutrients, water column stability, and pH) are suitable for their growth, and one of the major consequences of aquatic system eutrophication (1,4,41).

In Brazil, where these events are very frequent, the most common freshwater bloom forming genera are Microcystis, Anabaena, Aphanizomenon, Planktothrix, and Cylindrospermopsis, which is also the most studied cyanobacterial group (3,6,18,24,28,33,38,40,43,47).

Cyanobacteria produce an impressive diversity of secondary metabolites, where the major parts are identified as peptides, possessing peptidic substructures, or alkaloids (11,13).

Microcystis produces microcystins, potent cyclic hepatotoxins, which inhibit specific serine/threonine protein phosphatases (PP1 and PP2A), and are powerful tumor promoters (8,26). Microcystins have been responsible for the death of animals and humans, and are the most frequent toxin found in water bloom surveys, present in more than 60% of all samples (42).

Besides these peptides, various other linear and cyclic oligopeptides such as aeruginosins, microginins, micropeptins, aeruginopeptins, and anabaenopeptins are found within this genus. These oligopeptides are protease inhibitors (15,17,31,32,36).

Anabaena synthesizes neurotoxic (anatoxin-a, anatoxin-a(S), and saxitoxins) and cytotoxic (cylindrospermopsin) alkaloids and hepatotoxic peptides (microcystins) together with non-toxic oligopeptides like the well-known anabaenopeptins (8). Anabaenopeptins B and F are the most common compounds among the anabaenopeptin class. They are 19-membered cyclic depsipeptides that possess ureido linkage and have bioactive properties: anabaenopeptin B showed weak relaxation activity to norepinephrine-induced constriction of rat aortic preparations (14) and anabaenopeptin F is an inhibitor of protein phosphatases PP1 and PP2A (37,39).

Therefore, it is expected that blooms made up of different cyanobacterial species, would contain a wide variety of bioactive/non-bioactive compounds. Thus, in this paper the occurrence of a toxic bloom formed by several cyanobacteria species and the identification of its major metabolites were described.

Lake Violão is located in the extreme north of the lagoonal system found in the Coastal Plain of Rio Grande do Sul State, southern Brazil (29º20'44" S and 49º43' 58" W). This subtropical freshwater ecosystem is located near the city center of Torres, between the basaltic counterforts and sedimentary plains of the Mampituba River. The lake's surface area is 14 km2 and the average depth is 2 m. All along the period of bloom permanence (November 2004 to April 2005), the maximum and minimum pH registered in the lake were 7.5 and 8.5, respectively; water temperature ranged from 24.8 to 32ºC, and the conductivity from 241 to 367 mS/cm.

It has a diversity of aquatic macrophytes, especially water-hyacinths (Eichhorniacrassipes) and aquatic grasses, mainly along the margins. The lake is a tourist attraction, used for recreation, fishing, and water sports.

The samples studied for taxonomical, chemical, and toxicological analyses were collected on January 13, 2005, near the central zone of the lake. Material from cyanobacterial scum was collected using a flask, from the top of the water column, and also with a plankton net (25 µm mesh), around noon (12:00-13:00 hours). A set of samples was used to study the cyanobacterial composition. They were preserved with 4% formaldehyde and included in the Prof. Dr. Alarich R.H. Schültz Herbarium (HAS), Brazil. The material was studied using light microscopes. The photos were taken using a Zeiss Axioplan-2 microscope equipped with phase contrast and Optovar lens. The classification system by Komárek & Anagnostidis (1989, 1999, and 2005) (19, 20, 21) was adopted.

Estimation of the minimum 100% lethal dose (MLD100) was carried out with male mice "Swiss-Webster", 19-21 g, injected intraperitoneally (i.p.) with extract made of freeze dried cells extracted by sonication (20 min., 50W) in sterile 0.9% NaCl solution (n = 2). Time to death, signs of poisoning, and other symptoms were observed up to 72 h after injection. Animals killed by extract injection were necropsied to observ their livers.

Structural analysis by tandem mass spectrometry (MS/MS) was carried out on a Q-TOF Ultima API, fitted with an electrospray ion source (Micromass, Manchester UK) under positive ionization mode. The aqueous sample solutions (2-5 µl) were directly injected using a Rheodyne 7010 sample loop coupled to a LC-10A VP Shimadzu pump at 20 µl/min constant flow rate. External calibration was performed with NaI (Fluka) over m/z 100-2000. For MS/MS measurements, collision energy ranged from 18 to 45 and the precursor ions were selected under a 1 m/z window. Structures were analyzed manually from the MS/MS spectra.

HPLC analysis. The lyophilized samples were dissolved in 1:1 CH3CN/H2O and subjected to reverse-phase HPLC (Shimadzu Corp., Kyoto, Japan) using CAPCELL PAK C18, 6 x 150 mm (SHISEIDO Co., Ltd., Tokyo, Japan) with a linear gradient from 15% to 65% CH3CN/H2O/0.1% TFA at a flow rate of 1 ml/min over 25 min. UV absorbance was monitored at 215 nm. Each peak was manually fractionated and freeze-dried. The lyophilized samples were dissolved in water and subjected to mass spectrometry analyses.

Due to recent accelerated urban growth, Lake Violão has been suffering a series of impacts such as input of waste and trash, which compromise water quality, turning the environment into one that is prone to form cyanobacterial blooms, as already shown for different freshwater systems (16,30).

The studied bloom was formed by many different species of cyanobacteria (Figs. 1-4), where Microcystis protocystis and Sphaerocavum cf. brasiliense were predominant. Besides this, in the samples used for chemical and toxicological analyses, Anabaena oumiana, Cylindrospermopsis raciborskiiAnabaenopsis elenkinii f. circularis, and Aphanothece stagnina were also present. Sphaerocavum cf. brasiliense is a widespread Brazilian species that usually occurs in eutrophic waters together with Microcystis blooms, which has not yet been cited for producing toxins (1).

In the mouse bioassay, the extract of lyophilized cells presented a MLD100 of ca. 875 mg.kg-1 body weight. Mouse deaths occurred within 50 min - 1.5 h; the livers were swollen, blood-filled, and larger when compared to control, showing typical signs of hepatotoxic intoxication.

The mass spectra b, c, and d (Fig. 5) were very similar: within them only anabaenopeptins B and F and microcystins-LR and -RR are present. In spectra d and e (Fig. 5), corresponding to the subfractions 11 and 12, microcystin-RR does not show up anymore.

The twelve subfrations were also analyzed by HPLC. The profile from fraction 8 (Fig. 1, spectra b) was shown in Fig. 7. The HPLC and mass spectra data indicated that there were higher amounts of anabaenopeptin F in all fractions and relatively lower amounts of microcystins. Despite the fact that anabaenopeptin F was the major compound, the water bloom in Lake Violão was toxic. The co-occurrence of cyanotoxins and several other oligopeptides that have biological activities is well documented; microcystins were reported to occur simultaneously with anabaenopeptins, microginins, micropeptins, and aeruginosins (9,12,35,44,45).

We have found that the Lake Violão bloom sample also contained traces of other microcystins and anabaenopeptins, besides microginins, aeruginosins and cyanopeptolins. Identification and characterization of these peptides are underway. Reports about the co-occurrence of a great variety of oligopeptides in cyanobacterial blooms are becoming more frequently published (9,35,44,45).

These studies supplement those which focus only on microcystins in the blooms, as being the most important metabolites produced by cyanobacteria (44). Harada (2004) (13) raised the hypothesis that there are oligopeptides able to potentialize the toxic effects of microcystins, based on the different reactions of mammals receiving purified microcystins and those receiving integral cellular material. 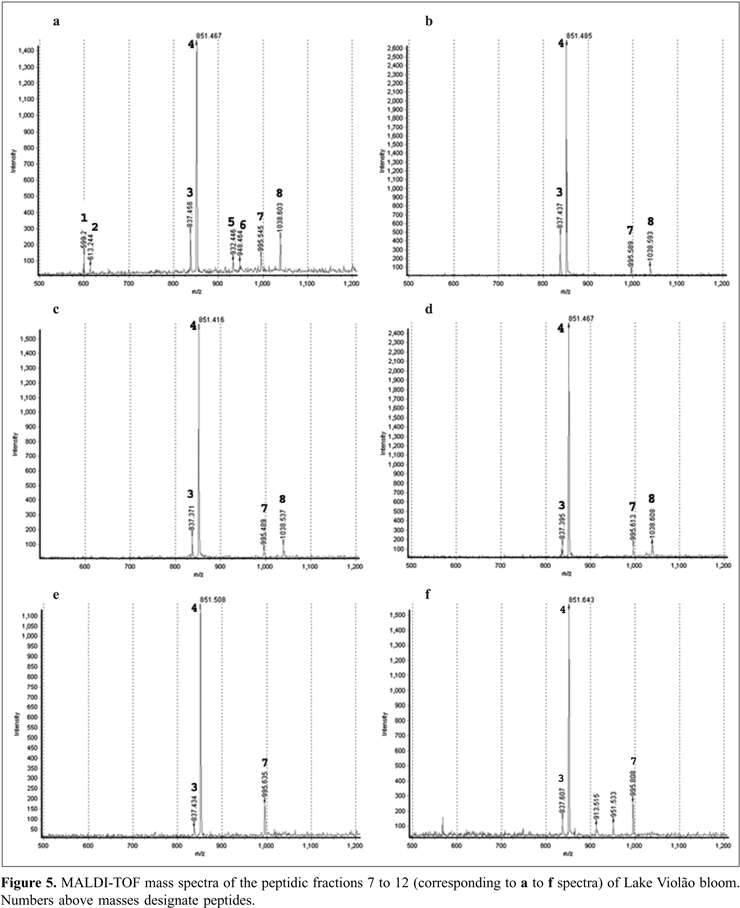