Exposure to loud music is increasing among young people, and so could be the number of hearing impairment cases in this population. Otoacoustic emission tests are sensitive in capturing the effects of exposure to noise, and allow the detection of early cochlear disorders. OBJECTIVE: This study aims to look into the prevalence rates of injuries to outer hair cells in a population of students through otoacoustic emission testing. MATERIALS AND METHOD: One-hundred and thirty-four subjects were submitted to transient evoked and distortion product otoacoustic emission tests. Subjects were assessed on a "pass/fail" scale. This is a cross-sectional descriptive study on prevalence rates. RESULTS: More than four fifths (80.6%) of the 134 subjects had altered transient otoacoustic emissions, most of whom were males; 97.8% had altered distortion product otoacoustic emissions and 79.9% had altered test results in both transient evoked and distortion product OAEs; most were males; 94.0% reported they used earphones; and 82.8% stated they frequented places where loud music was played. CONCLUSION: The high prevalence rates of altered test results seem to indicate the presence of early cochlear disorders in the studied subjects. A significant number of subjects reported exposure to loud music, a habit that may be conducive to the onset of cochlear disorders. 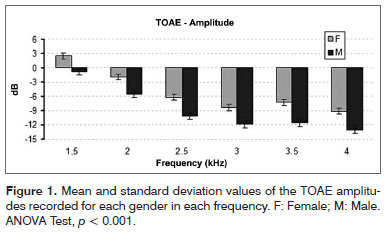 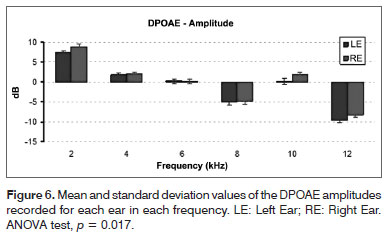 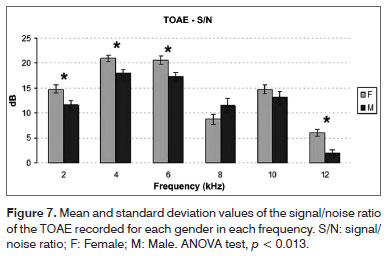