OBJECTIVE: To evaluate the shear bond strength of metallic brackets using the self-etching system after its activation and storage for 2, 5 and 9 day periods. METHODS: A total of 64 bovine teeth were divided in four groups and prepared to receive the brackets. Initially, seven self-etching primer blisters were activated and used to bond the brackets of group I. The blisters were store at a constant temperature of 4ºC for 2, 5 and 9 days and used to bond the brackets of groups II, III and IV, respectively. RESULTS: No statistic difference was found in shear bond strength comparing groups I, II and III. However, a significant difference was found in group IV. CONCLUSION: The shear bond strength seems not to be affected by activation and storage of the self-etching primer for a 5 day period. More studies are necessary to evaluate other characteristics of the material after its activation and storage for long periods of time.

OBJECTIVE: To evaluate the shear bond strength of metallic brackets using the self-etching system after its activation and storage for 2, 5 and 9 day periods.

Since Buonocore3 in 1955 proposed the acid etching technique, the concept of bonding to enamel allowed the development and application of various techniques and new materials in all dentistry fields.19 The use of phosphoric acid on dental surface results in microporosity into which composite can flow and be polymerized to form a mechanical adhesion to enamel. Therefore, several adhesive materials used in orthodontics have been developed, making necessary new studies to prove its efficacy.12,17,18

The use of direct bonding techniques allowed great benefits to orthodontists: esthetics improvement, less risk of enamel damage, easy control of dental plaque by the patient, minor gingival irritation and reducing patient chair time. These important gains were possible since direct bonding is easier than the adaptation of bands on all teeth.20

Among the huge variety of new materials, self-etching system (acid already incorporated into the primer) uses chemical and different etching technology than traditional products.14 It was first available for use in restorative dentistry8 and recently has been used for orthodontic acessory bonding.15

The adhesive used in this study is the Transbond Plus Self Etching Primer-3M. This adhesive has esters of phosphoric methacrylate acid (hydroxyethyl-metacrylate), forming a bifunctional molecule. When rubbed on enamel surface, the acid component exposes the enamel prisms while the primer components simultaneously penetrate on these exposed prisms. Phosphoric acid removes calcium of the hydroxyapatite. The phosphate group forms a composite with calcium which is incorporated to the product during polymerization, since there is no washing step in this system.5 The self-etching adhesive pH is around 1, promoting a good enamel penetration. The lower the pH of the substance, the greater its capacity of penetration in dental tissues. This product solvent is water, enabling the ionization of acid monomers and contributing for enamel demineralization.14 After applying the adhesive on dental surface, the tooth must be dried with oil and moisture-free compressed air, in order to permit solvent evaporation. If drying is not performed properly, the adhesion forces can be compromised.10

Some studies show no statistical significant differences between conventional and self-etching systems on shearing bond strength of metallic brackets.7,18

The objective of the present study is to evaluate shearing bond strength of metallic brackets on bovine teeth using self-etching system immediately after its activation and with intervals of time of 2, 5 and 9 days.

Sixty-four bovine incisors were used. The teeth were selected based on the same criteria adopted by Sponchiado et al18 and included: Intact enamel surface, absence of prior application of chemical substances such as thymol, hydrogen peroxide, alcohol or formalin. The teeth were cleaned and preserved in distilled water at an average temperature of 4ºC. A landmark was printed on the most labial projection of the vestibular surface of each tooth for later identification of the region to receive the brackets. The crowns were involved in acrylic resin (manipulated according to the manufacturer's instructions), and then pressed against a glass plate until the landmark became visible (Fig 1). In order to prevent the formation of porosities, polymerization occurred under hydrostatic pressure, inside a specific container.

After complete polymerization, the acrylic resin was worn using sandpapers (numbers 150, 400 and 600) until it was exposed the enamel surface with sufficient area for placement of an orthodontic bracket (Edgewise standard - dimensions of 3.3 mm by 3.6 mm and 0.022x0.028-in slot). The radicular portions of the teeth were included in PVC rings, filled with type IV gypsum (stone) manipulated according to the manufacturer's specifications. The teeth were positioned with their vestibular surfaces perpendicular to the base of the ring. A square template was specially constructed for this purpose (Figs 2 and 3). After gypsum crystallization, all teeth were immersed in distilled water and stored in an oven at a temperature of 37±1ºC. All test samples were equally and randomly divided into 4 groups.

Before bracket bonding, the teeth received prophylaxis with non-fluoridated pumice and rubber prophylactic cups at a low speed for 15 seconds. Then a water/air spray washed the surface for over 15 seconds. Enamel drying occurred using oil and moisture-free compressed air. The activation of the self-etching system proceeded according to the manufacturer's instructions in sufficient quantity (10 blisters) to bond 64 brackets. At the time of activation, 16 brackets of group I were bonded as follows:

- Adhesive was rubbed on the surface of each tooth for three seconds and dried with a hair dryer for the same period.

- Transbond XT was applied on bracket base following the manufacturer's recommendations. The accessories were positioned and pressed against the enamel surface. The excess of composite was removed. The polymerization occurred for 10 seconds on each side of the bracket perimeter with visible halogen light appliance (Photopolymerizer 3M - USA - 5560AF model), with intensity of 488mW/cm2 (measured by radiometer Demetron, model 100).

- The bracket slot was positioned perpendicular to the PVC ring (Fig 4). A template for this purpose was used.

The test samples of Group I were stored in distilled water at 37±1°C for 7 days. The activated blisters (containing the self-etching system) were stored inside a refrigerator at a mean temperature of 4ºC for future use in groups II, III and IV.

The results of shearing bond strength in Megapascal (MPa) can be visualized in Table 1, for all groups. The groups I and III presented, respectively, the smallest and the highest values of standard deviation: 2.2 and 3.56, respectively.

Some studies9,16 suggested that bracket adhesion force should vary between 6 and 8 MPa, since these values would be sufficient to resist chewing and orthodontic forces. Other studies using this same kind of material found shearing bond strength with values ranging from 7.5 to 10.57 MPa.7,18 All results found in this study, including group IV, are near these values (Fig 7). The results indicate that the self-etching system could be used maintaining its characteristic of optimal shearing strength until 9 days after its activation. However, to obtain the best results using this material, the operator shall follow carefully all manufacturer's recommendations. Sponchiado et al18 stated that variations on the technique that uses the self-etching system can adversely affect shear resistance. Other factors that may affect the shear strength and should be considered are the bracket size, enamel chemical composition,1 dental prophylaxis2 and the conditions in which the procedure was conducted.6 In exception of enamel chemical composition, all other factors can be controlled by the orthodontist.

Another aspect that must be considered is that bovine enamel offers different levels of adhesion, when compared to human enamel.11 Besides, the manipulation, preparation and surface treatment during the experiment is crucial for reliable results.4 However, the use of bovine teeth in shearing bond strength studies became preferred due to its easy acquisition and histological and histochemical characteristics similar to human enamel.11,13,15,18

Based on the results obtained in this study we can conclude that:

» The shearing bond strength levels found in all groups were higher than the levels recommended by the literature.

» The storage of the self-etching system for 5 days after activation at an mean temperature of 4ºC seems not to affect shearing bond strength levels.

» New studies are necessary to evaluate the properties of the material when it is stored for a long period after being activated. 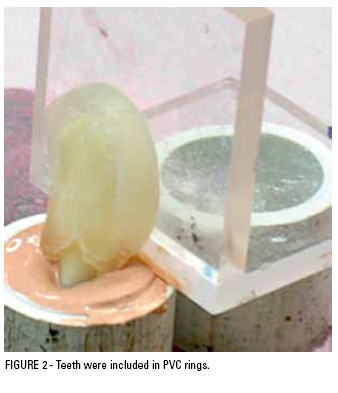