Circumcisions for medical reasons in the Brazilian public health system: epidemiology and trends

OBJECTIVE: To evaluate the epidemiological factors associated to medical circumcision, based on data from the Brazilian public health system. METHODS: Using the Unified Health System public database between 1984 and 2010, hospital admissions associated with surgical treatment of phimosis were searched. A total of 668,818 men admitted to public hospitals who underwent circumcision were identified and included in the present study. RESULTS: A mean±standard deviation of 47.8±13.4 circumcisions/100,000 men/year was performed through the Unified Health System for medical reasons. During the 27-year period evaluated, 1.3% of the male population required circumcision for medical reasons. Total number of circumcisions and circumcision rate increased in childhood, declined progressively after 5 years of age and rose again progressively after the sixth decade of life. In the regions of the country with better access to healthcare, 5.8% of boys aged 1 to 9 years old required circumcisions. From 1992 to 2010 there were 63 deaths associated with circumcisions (mortality rate of 0.013%). CONCLUSION: In conclusion, yearly circumcision rates could be estimated in Brazil, and a very low mortality rate was associated with this procedures. Circumcision is mostly performed in children in the first decade of life and a second peak of incidence of penile foreskin diseases occurs after the sixth decade of life, when circumcision is progressively performed again. 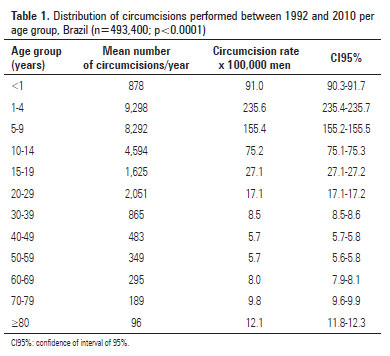