OBJECTIVES: To analyze the operative time, length of hospitalization and cost, as well as the bleeding and pain observed during the postoperative period, of thyroidectomy procedures using vessel sealing, harmonic scalpel or the conventional technique.

METHODS: Retrospective analysis of thyroidectomies performed between 2007 and 2010 using either the conventional technique or minimally invasive techniques involving vessel sealing or a harmonic scalpel. Gender, age, primary diagnosis and procedure type were analyzed. The outcomes analyzed included the length of the procedure, length of hospital stay, need for blood product transfusions, pain and cost of hospitalization. The findings were based on a significance level of 5%, and statistical analyses were performed using the R software.

Thyroidectomy surgery was standardized by Kocher during the mid-20th century. He was awarded the Nobel Prize in Medicine in 1909 for his advances in the physiology and diseases of the thyroid, and his surgical techniques are still used today(1).

A major advance in surgical procedures took place in the 1990s with the so-called laparoscopic revolution, in which many operations were adapted from traditional open surgery to minimally invasive techniques. Minimally invasive surgeries cause less surgical trauma and less pain and may result in a shorter hospital stay. The technique has become particularly attractive for thyroidectomy procedures because it produces better cosmetic results without increasing the incidence of postoperative complications(1,2).

With the improvement of minimally invasive surgical techniques, new technologies have been introduced, among them the harmonic scalpel (UltraCision®) and the vessel sealing device (LigaSure®). The harmonic scalpel is an instrument that uses ultrasonic energy to achieve protein denaturation of the muscle layers and the endothelium of blood vessels. This technique has been recommended and is a well-accepted method for soft tissue incisions when the aim is to control bleeding and minimize thermal injury (complementing or replacing electrocautery, laser or even the cold scalpel), and it allows simultaneous cutting and coagulation. Because this method does not use an electrical current, the harmonic scalpel eliminates the risk of burns and it is easy to install and handle, leading to decreased surgical time(1-5). The vessel sealing device seals vessels by fusing the inner layers of the vessel wall with minimal levels of thermal dispersion, burning and tissue friction, thereby reducing the incidence of accidental burns(6). Because of these benefits, the use of the harmonic scalpel or the vessel sealing device has grown in popularity with head and neck surgeons, especially for thyroid surgeries.

These technologies offer potential clinical benefits but also lead to increased costs, making it important to consider an economic evaluation that addresses these two dimensions(7). Furthermore, no data have been published in Brazil on the cost and clinical outcomes associated with usage of the harmonic scalpel or the vessel sealing device for thyroidectomy procedures.

The aim of the present study was to analyze the operative time, length of hospitalization, need for blood product transfusions, pain score during the postoperative period and costs associated with thyroidectomy procedures using either a vessel sealing device, a harmonic scalpel or the conventional technique and subsequently compare the analysis results among these surgery methods. The present study analyzed thyroidectomies that took place from 2007 to 2010 at the Hospital Israelita Albert Einstein (HIAE).

Using the HIAE billing system, thyroidectomy procedures performed between 2007 and 2010 were selected according to the technique used (the conventional technique or a minimally invasive technique using a vessel sealing device or a harmonic scalpel).

The outcomes analyzed included the following: the duration of the surgery (from the beginning to the end of surgery, ignoring the start of the anesthesia procedure), the length of hospital stay, the need for blood product transfusions, any postoperative blood counts requests, the pain score (using a numeric pain scale in which 0 represents no pain and 10 represents the worst pain imaginable) on the morning of the first postoperative day, the pain score before discharge and the total cost of the procedure.

To analyze the cost of the procedure for a particular patient, the unit cost of each resource used by the patient was updated based on the December 2010 cost table. This update was performed to account for the effects of inflation and cost increases over time. The costs of various techniques were compared against a reference value. The value chosen was the cost of the partial thyroidectomy procedure using the conventional technique. This cost benchmark was defined as the mean cost of partial thyroidectomy procedures using the conventional technique over the previous 3 years (n=53). The other procedures were subsequently compared to this reference and described as percentages of the reference value.

Statistical analyses were performed to evaluate the statistical significance of differences among the groups of interest. For the quantitative variables, the analysis of variance (ANOVA) was used to identify significant differences between the means and determine whether a given factor exerts an influence on any of the dependent variables. For the qualitative variables, the χ2 test was used to analyze the frequency of a certain event or to verify that all conditions are equally likely to occur.

A multiple linear regression model was used to evaluate the performance of the three procedure types (conventional technique, vessel sealing or harmonic scalpel) in terms of the "duration of surgery," "length of hospital stay" and "total cost" outcomes. This model considers and evaluates the combined effect of the variables that are potentially related to the outcomes.

For the "length of hospital stay" outcome, the χ2 test was applied; this test compares the ratio of the length of stay for each of the analyzed groups.

The conclusions were based on a significance level of 5%, and the statistical analyses were performed using the R software package.

Table 1 shows the characteristics of the patients who were included in the analysis.

No differences were observed among the groups in terms of age, gender or diagnosis of neoplasia. There were significant differences among the treated groups regarding the type of procedure performed. In the group that received treatment with the vessel sealing device, a higher percentage of the surgeries involved total thyroidectomy procedures with lymphadenectomy compared to the other two groups, suggesting that greater complexity was needed for this treatment.

The outcomes of the analysis are shown in table 2, as separated by treatment group and by type of procedure.

With respect to the analyzed outcomes, significant differences were found among the compared groups for the duration of surgery, the length of hospital stay and the total cost of hospitalization.

Because certain factors, such as the patient and surgical procedure complexity and the experience level of the surgeon with the technology, can independently influence the outcomes, it was decided to use multiple linear regression to analyze the effect of using the vessel sealing device or the harmonic scalpel as described below.

The pain score varied according to the type of procedure and whether the new technologies were used. However, no clear pattern was identified and no significant differences were found among groups.

No records were found for blood transfusions performed in any of the groups. Furthermore, there were few requests for postoperative blood counts in the groups analyzed. Consequently, these outcomes were not included in the multivariate analysis.

A multiple linear regression model was developed to evaluate the "duration of surgery," "length of hospital stay" and "total cost" outcomes.

The percentage distribution in the length of stay category (Table 4) was not homogeneous in relation to the groups (p<0.001), indicating that the group influenced the length of stay in the hospital. For the group of patients whose surgeries involved vessel sealing, 53% of the cases (95% confidence interval - 95%CI= 39.98%, 66.46%) experienced a longer hospital stay (3 days or more). The groups whose surgeries involved the conventional technique and the harmonic scalpel showed similar distributions related to one another in terms of the length of hospital stay.

For the "total cost" outcome (Table 5), the variables with significant impact included the use of the vessel sealing device, the use of harmonic scalpel (p<0.001), the age of the patient (p=0.006) and the type of procedure. Surgeries involving the use of the vessel sealing device or the harmonic scalpel cost more than those that used the conventional technique. Increased patient age led to increased cost, and the total thyroidectomy procedures, with or without lymphadenectomy, were significantly more costly than the partial thyroidectomy procedures.

The objective of the present study was to evaluate the impact of two new surgical techniques on the intermediate clinical outcomes and hospital costs for patients undergoing thyroidectomy surgery at HIAE, between January 2007 and August 2010. The analysis allowed the correlation between the influence of each method on clinical outcomes and on the costs of the procedures.

With respect to the length of hospital stay, no significant difference was observed between the use of harmonic scalpel and the use of the conventional technique, which corroborates the results obtained by international studies(7-11).

Considering the per-minute costs associated with using the operating room, this shortened duration should resulted in a 4% reduction in the total cost of procedures by using this technology. However, the incremental cost increase due to the use of the harmonic scalpel more than compensates for the savings achieved through a shorter period of time in the operating room. The use of the harmonic scalpel in surgical thyroidectomy reflected a mean increase of 28% in the total cost of the procedure.

No significant differences were found among the groups regarding the use of blood products and the postoperative pain score.

The use of the harmonic scalpel was favorable in terms of reducing the duration of surgery, however, there was no effect on the length of hospital stay, and the cost of the procedure was significantly higher than that of other treatments. Regarding the use of the vessel sealing device, no favorable results were observed among the outcomes that were evaluated, and the cost increase was significant compared to the conventional technique. 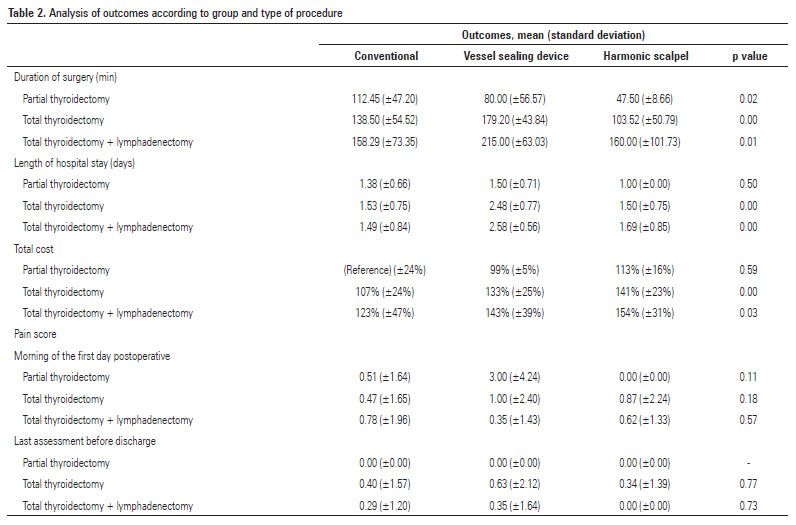