The aim of this study was to evaluate the in vitro germination of zygotic embryos and seeds of Caesalpinia ferrea Martius and the morphogenetic responses of the explants to different concentrations of growth regulators. Seeds and zygotic embryos were inoculated in MS culture medium and kept in a growth room at a temperature of 25 ± 2 ºC for 16 hours of photoperiod for 30 days. The seeds had a higher in vitro germination rate than the explants from zygotic embryos. However, zygotic embryos in MS medium supplemented with 0.9 mg L-1 BAP had the highest percentage of regeneration (50%), number of shoots (3.25), buds (2.85) and leaves (3.15), multiplication rate (27.75), and length of shoots (1.96 cm). The in vitro culture of zygotic embryos and seeds made possible the multiplication of a higher number of healthy seedlings. Thus, it can be used as an alternative technique for the propagation of this species.

The experiments were carried out from March to October 2016 at the Plant Tissue Culture Laboratory (LCTV), Superior School of Technology (EST) of the University of the State of Amazonas (UEA). C. ferrea seeds were obtained from the Seed Bank of the Microbiology and Soil Fertility Laboratory of the National Institute of Amazonian Research (INPA). The seeds had a good physiological maturity and were stored at room temperature.

The MS (Murashige and Skoog 1962Murashige, T. & Skoog, F. 1962. A revised Medium for rapid growth and bio assays with Tobacco tissue cultures. Physiology Plant 15: 473-497.) culture medium was used. The pH of the medium was measured at 6.0 before autoclaving at 121 ºC and 1 atm pressure for 15 minutes. The cultures were maintained in a growth room at 25 ± 2 ºC for 16 hours of photoperiod with light intensity of 52 μmol m-2s-1 from two cold white fluorescent lamps.

Establishment and in vitro germination - Initially, the seeds were scarified on an emery stone, in the lateral region of the opposite side of the hilum to slightly wear out the tegument and thus allow the absorption of water. After scarification, the seeds were washed with neutral detergent and rinsed under running water for one minute. They were then immersed in 2.0% (v/v) Carbendazim® solution for 1 hour under constant stirring at 100 rpm. Afterward, the seeds were immersed in 70% alcohol for 1 minute and then in 0.25% (v/v) sodium hypochlorite solution (NaOCl) for 30 minutes under stirring. After disinfestation, the seeds were washed 4 times with distilled water and autoclaved. Then they were immersed in a container with distilled water sealed with polyvinyl chloride (PVC) film for 24 hours for imbibition. After this period, a horizontal incision was made at the center of the seed, separating the cotyledons using tweezers to remove the zygotic embryo, under aseptic conditions, in a laminar flow chamber.

A completely randomized experimental design, with 6 replications composed by 5 experimental units, was used for the in vitro germination. The results were subjected to analysis of variance (ANOVA) and the means were compared by the Duncan test at 5% probability.

After 30 days of inoculation, the percentage of embryo regeneration, number of shoots and buds, multiplication rate, sprout length, number of roots and percentage of callus formation were evaluated.

Regarding the morphogenetic response, a completely randomized experimental design in a 4 × 3 factorial scheme (BAP concentrations × NAA concentrations) was used, totalizing 12 treatments, with 5 replications, each one consisting of 4 experimental units. The data were subjected to ANOVA and the means were compared by the Duncan test at 5% probability. Statistical analyses were performed using the ASSISTAT× software, version 7.7.

The formation rate of normal seedlings (figure 1) from the in vitro germination of zygotic embryos (13.33%) and seeds (20%) was low in comparison to the growth of the seedlings. These differences can be attributed to losses due to microbial contamination and to the latency in the development of seedlings cultured in vitro, which resulted in the absence of leaf expansion and in the germination of explants. This fact is possibly related to the high osmotic pressure reducing plant growth and affecting the cell metabolism, acting as a barrier to leaf expansion (Pinheiro & Chaves 2011Pinheiro, C. & Chaves, M.M. 2011. Photosynthesis and drought: can we make metabolic connections from available data?. Journal Experimetal Botany 62: 869-882.).

Thumbnail
Figure 1
In vitro culture of germinated seedlings from zygotic embryos (a) and seeds (b) of Caesalpinia ferrea in MS medium after 30 days.

Regarding the hypothesis, it is expected to obtain a high number of shoots of zygotic embryos cultured in vitro, due to the high totipotency of these explants (Bhojwani & Dantu 2013Bhojwani, S.S. & Dantu, P.K. 2013. Zygotic embryo culture. In: Plant tissue culture: an introductory text. Springer, India, pp. 127-140.). The lowest number of shoots and buds occurred in the zygotic embryos, which is possibly related to shoots of fasciculate apex and lower internode elongation (figure 1a), differing from the seedlings originated by seed germination, which showed a higher internode elongation and uniformity (figure 1b). This result makes it possible to establish the in vitro culture of C. ferrea, considering that from a seedling which can produce 10 nodal segments.

The lower multiplication rate of seedlings originated from zygotic embryos, in comparison to the seeds, suggests the need to carry out new studies on the morphogenetic response of the zygotic embryos regeneration, considering the fact that zygotic embryos are explants with tissue of high totipotency (Kumar & Reddy 2011Kumar, N. & Reddy & M.P. 2011. In vitro plant propagation: a review. Forest Science 27: 61-72.).

Thumbnail
Figure 2
Percentage of regeneration (a), number of shoots (b), buds (c) and leaves (d), multiplication rate (e), shoot length (f), number of roots (g) and callus formation (h) obtained from zygotic embryos of Caesalpinia ferrea after 30 days of culture in vitro in MS medium supplemented with different concentrations of BAP and NAA. Means followed by the same letter do not differ statistically among themselves by the Duncan's test (p < 0.05).
Thumbnail
Figure 3
Developmental phases of zygotic embryo and seedling formation of Caesalpinia ferrea in MS medium supplemented with 0.9 mg L-1 BAP: Initial culture of zygotic embryo (a); Germination of zygotic embryo at 10 days (b); Seedling with shoots, buds and primary root at 20 days (c); Normal seedling after 30 days of in vitro culture (d).

The interaction between NAA and BAP influenced the oxidation of explants, and the highest concentrations significantly reduced the induction of shoots (figure 2b). Excessive concentrations of cytokinins and auxins when applied to the sprout induction medium may compromise sprouting from the embryonic axes, affecting the growth of the explants, in addition to being a reduction factor of the multiplication rate (Wojcikowska & Gaj 2017Wójcikowska, B. & Gaj, M.D. 2017. Expression profiling of auxin response factor genes during somatic embryogenesis induction in Arabidopsis. Plant Cell Reports 36: 843-858.).

Regarding the development of zygotic embryos, there was a reduction in the number of buds when the explants were subjected to isolated concentrations of NAA, or to combinations of NAA with BAP (figure 2c). The reduction in the number of buds may be related to the high concentrations of auxin/ cytokinin which inhibited the development of the lateral and adventitious buds in the C. ferrea explants. Cytokinins are responsible for cell division, apical dormancy overcoming, and induction of axillary bud proliferation in explants cultured in vitro (Miransari & Smith 2014Miransari, M. & Smith, D.L. 2014. Plant hormones and seed germination. Environmental and Experimetal Botany 99: 110-121.).

The multiplication rate (figure 2e) of the zygotic embryos was higher (27.75) than that observed by Silva et al. (2018)Silva, D., Imakawa, A.M., Bruno, F.M.S., Costa, S.S. & Sampaio, P.T.B. 2018. In vitro propagation and seedling acclimatization of Caesalpinia ferrea Mart., a valuable medicinal plant in the Amazon (Fabaceae). Boletim do Museu Paraense Emílio Goeldi. Ciências Naturais 13: 57-65. who studied explants of nodal segments and axillary buds of the species (10.06). The shoots from zygotic embryo cultured only at the 0.9 mg L-1 BAP concentration had a mean length of 1.96 cm (figure 2f and 3d). It was also observed that the highest concentrations of BAP and NAA resulted in the lowest sprout growth (figure 2f). Miao et al. (2016)Miao, Y., Zhu, Z., Guo, Q., Yang, X., Liu, L., Sun, Y. & Wang, C. 2016. Dynamic changes in carbohydrate metabolism and endogenous hormones during Tulipa edulis stolon development into a new bulb. Journal Plant Biology 59: 121-132. report that the ability of tissues to respond to the growth and development of shoots depends on various endogenous and/or exogenous factors and their interactions.

Root formation was observed in all treatments; however, the culture medium with no growth regulators (T1) had the highest mean (2.15 roots/explant), significantly differing from the other combinations of auxin and cytokinin (figure 2g). Natural or synthetic auxins generally fail to stimulate root formation in vitro. Souza & Pereira (2007)Souza, A.V. & Pereira, A.M.S. 2007. Enraizameto de plantas cultivadas in vitro. Revista Brasileira de Plantas Medicinais 9: 103-116. report that certain plant species, especially woody plants, are difficult to root in the presence of auxins, indicating that other factors may influence the in vitro rooting.

The highest rates of regeneration and multiplication of C. ferrea zygotic embryos were obtained in MS culture medium supplemented with 0.9 mg L-1 BAP. The highest mean (2.15) of roots/ explants was observed in the absence of a growth regulator, benefiting the survival of the seedlings. The results pointed out the importance of evaluating the mineral composition of the culture medium and growth regulators in order to determine optimal conditions for the propagation of C. ferrea from seeds and zygotic embryos for commercial purposes as well as for conservation and multiplication in vitro of this species.

The authors thank the Foundation for Research Support of the Amazonas State (FAPEAM) for granting scholarship to the first author by the Postgraduate Program in Biodiversity and Biotechnology of the University of the state of Amazonas (Bionorte/UEA). They also thank Dr. Luiz Augusto Gomes de Souza of the National Institute of Amazonian Research (INPA) for the identification and supply of C. ferrea seeds.

Figure 1   In vitro culture of germinated seedlings from zygotic embryos (a) and seeds (b) of Caesalpinia ferrea in MS medium after 30 days.

Figure 2   Percentage of regeneration (a), number of shoots (b), buds (c) and leaves (d), multiplication rate (e), shoot length (f), number of roots (g) and callus formation (h) obtained from zygotic embryos of Caesalpinia ferrea after 30 days of culture in vitro in MS medium supplemented with different concentrations of BAP and NAA. Means followed by the same letter do not differ statistically among themselves by the Duncan's test (p < 0.05). 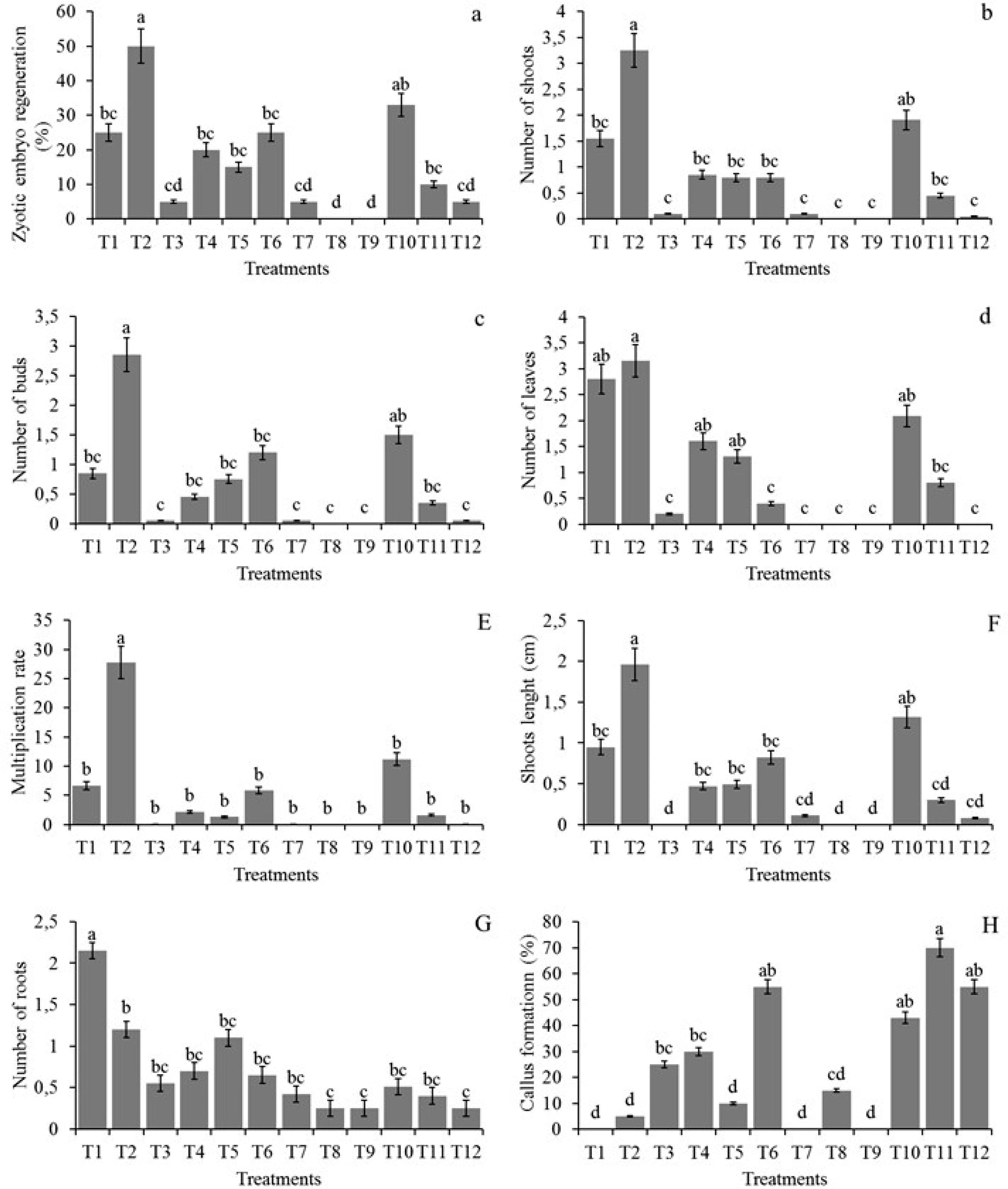 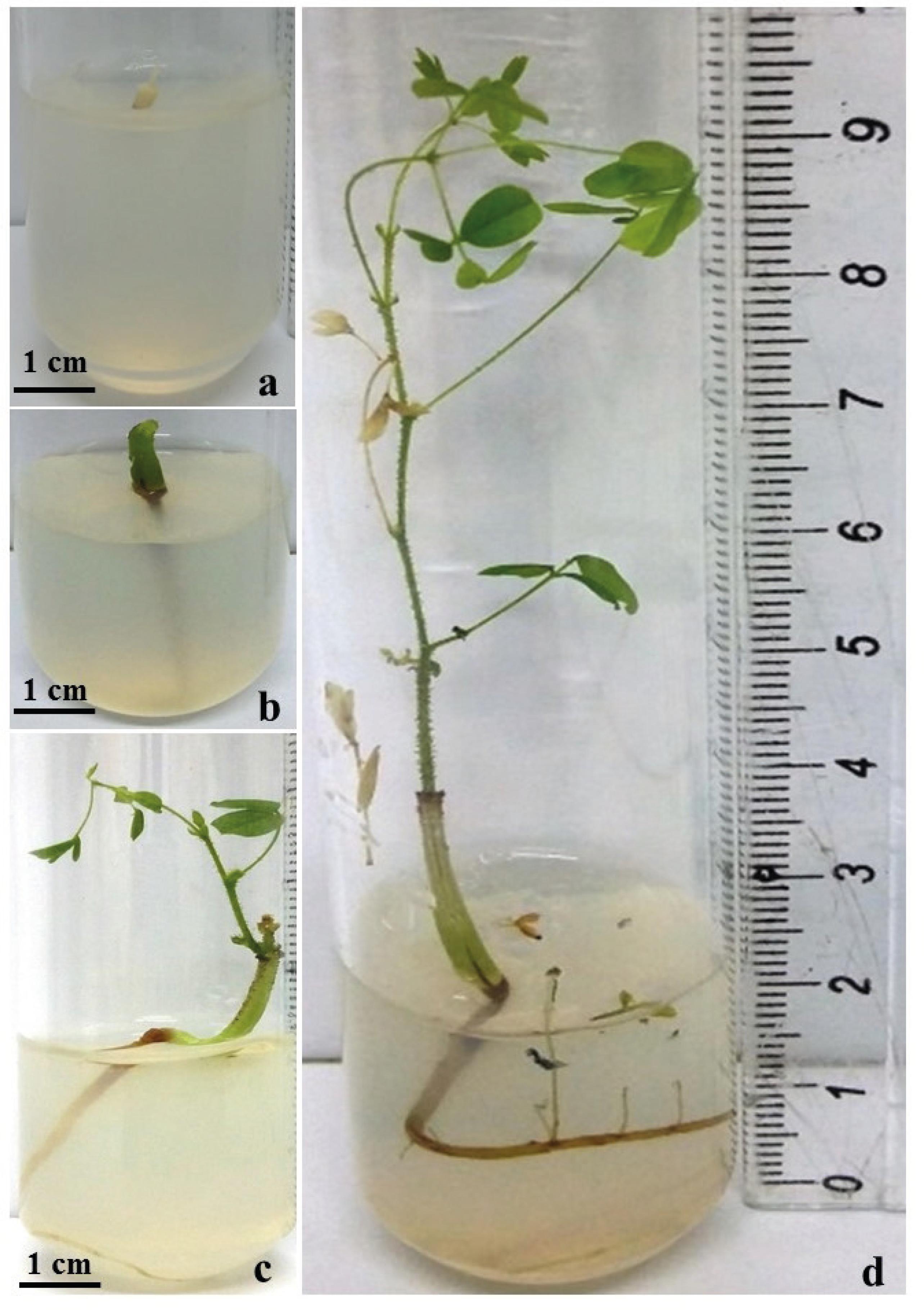