Variation of the ichthyofauna along the Goioerê River: an important tributary of the Piquiri-Paraná basin

The construction of reservoirs is considered an important source of impacts on the fish fauna, severely altering the structure of the assemblage. This paper aimed to describe the structure of the fish assemblage of the Goioerê River, determining its longitudinal distribution and patterns of species dominance. The evaluation of its longitudinal variation in the diversity and abundance of the fish assemblage was conducted in July and October 2004 and January and May 2005. The collections were carried out near the headwaters (Gurucaia), middle stretch (Olaria), just above the falls (Paiquerê) and downstream (Foz). Forty-four species were captured. The Gurucaia fish assemblages differed significantly from Olaria, Paiquerê and Foz. The Olaria assemblages differed significantly from the Foz. Gurucaia showed the lowest diversity and abundance of species. Astyanax aff paranae Eigenmann,1914 (78% of the total) was found to be dominant at this site. Almost the same species richness was found at Olaria and Paiquerê, although Olaria had the greatest abundance of individuals. Astyanax aff paranae, Cyphocharax modestus (Fernández-Yépez, 1948) and Astyanax altiparanae Garutti & Britski, 2000 were the top three dominants and comprised over 71% of the total number of fish caught. At Paiquerê, Astyanax altiparanae, Hypostomus aff ancistroides (Ihering, 1911) and Loricariichthys platymetopon Isbrücker & Nijssen, 1979 composed 58% of the catches. Thirty-one species were recorded at Foz, which presented the greatest richness. The most abundant species were Apareiodon affinis (Steindachner, 1879), Galeocharax knerii (Steindachner, 1879) and A.altiparanae, which contributed to 50% of the total catches in this environment.These results record the fish biodiversity and how the community is longitudinally structured in the Goioerê River, and also demonstrate how this type of evaluation is important to understanding the fish community patterns and finding solutions to problems related to the conservation and management of the basin. 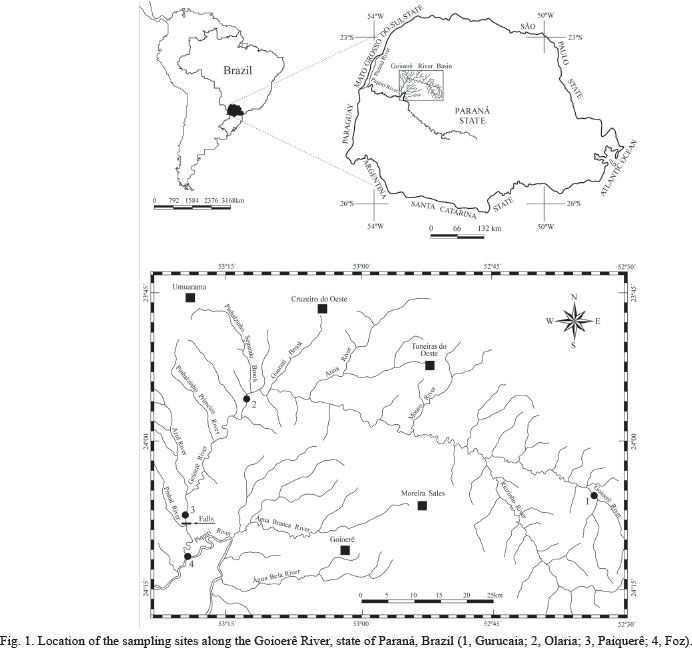 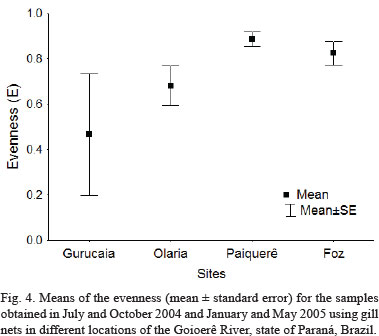 SciELO Analytics
Dimensions
Altmetric
Scite_
Variation of the ichthyofauna along the Goioerê River: an important tributary of the Piquiri-Paraná basin
PlumX