New records, and the first description of a female, for Psychoda simillima (Diptera, Psychodidae) in southern South America

Based onmale and female, Psychoda simillima Tonnoir, 1929 is redescribed, with a discussion of generic and subgeneric classifications. This is the first record for Chile as well as the first description of a female for this species.

New records, and the first description of a female, for Psychoda simillima (Diptera, Psychodidae) in southern South America

Based onmale and female, Psychoda simillima Tonnoir, 1929 is redescribed, with a discussion of generic and subgeneric classifications. This is the first record for Chile as well as the first description of a female for this species.

When described, Psychoda simillima Tonnoir, 1929 was placed in the subgenus Threticus Eaton, 1904 (Tonnoir, 1929). The genus Threticus was proposed by Eaton (1904) based on the difference in the structure of the male genitalia, the cerci [cercopods on Tonnoir (1929)] being much longer than the epandrium (ninth tergite) in Threticus and about equal size in Psychoda Latreille, 1796. However, Threticus, considered a subgenus of Psychoda by Tonnoir (1929), was reinstated as a genus by Quate (1959), who based this mainly on the shape of the ascoids (one superior and one inferior branch in Threticus and Y-shaped in Psychoda), and the mouthparts (bulbous without apical teeth in Threticus and flattened with apical teeth in Psychoda).

Within Psychodasensu Quate (1959) the shape of the cercus was used again in a genus-level classification by Ježek (1983, 1984). He used the short cercus (with posterior third bare), and the antenna with 14 flagellomeres (the last three of which are separate and subequal in size), as diagnostic characters that separate the genus Psychodocha Ježek, 1984 from all other genera. The putative Psychoda simillima fit within Psychodocha by that proposal, yet it was not included in the list provided by Ježek (1983), when he described the genus. Psychodocha was later considered to be a subgenus (Bravo et al., 2006), due to problems with the Ježek classification for Neotropical fauna. This subgeneric classification was considered but not strictly used by Cordeiro et al. (2011) due to variation in many characters in the neotropics. However, the neotropical fauna are not unique in divergent morphologies. For example, two species (Psychoda martini Hogue, 1970 from Kenya and Psychoda aponesos Quate, 1959 from New Guinea) have apical flagellomeres as described for Psychodocha, but also have long cerci. Apically bare short cerci are found in species belonging to other subgenera, such as Psychoda albescens Quate & Quate, 1967 (from New Guinea), which was transferred to Logima Eaton, 1904 by Ježek (1984).

Psychodasimillima shares some characters with other species of the subgenus Psychodocha that are absent, or very rare, in other Psychoda: a relatively large vertex (longer than the width of the eye bridge); a vertex hair patch that extends laterally to the occiput; a relatively long palpus, long tarsomeres (mainly the first), and short and truncate Sc. Additional genera of the Psychodini sensu Quate (1959) also share some of these characteristics and are considered by many to be related to Psychoda, such as Threticus, Neomaruina Vaillant, 1963 and Philosepedon Eaton, 1904. Interestingly, P. simillima lacks the frontoclypeal suture that is found in all species (that we have seen) of the subgenus Psychodocha with the exception of P. itoco Tokunaga & Komyo, 1954 (from Japan). The lack of the additional anterior sclerite of the pteropleurite, the large trapezoidal pteropleurite completely restricted by sutures (Ježek, 1983), the flattened labellum with only apical teeth and the second costal node are characteristics that support the inclusion of P. simillima into Psychodasensu Quate. A phylogenetic analysis of this group is needed to better understand the evolution of these characters. Here, we provide a more complete description for this species, and include the female for the first time and report new geographic records.

Comments: In contrast to the original description, there are no erect hairs on R1 in the specimens we examined, but the shape of male genitalia is a conspicuous diagnostic character for this species. Tonnoir (1929) noted that Psychodasimillima is very similar to Psychoda pseudocompar Tonnoir, 1929 being different only by the structure of male genitalia, which is remarkable for the unusual development of aedeagus and paramere in the former. Psychodasimillima is apparently closely related to the subgenus Psychodocha, but the lack of the clypeal suture causes uncertainty for its classification.

The two males used originally for the description were collected on a window in Bariloche, Argentina. In two other places (Argentina and Chile) we found males (and females) that are identical to the description of Tonnoir (1929), except for the erect hairs on R1. These females, the first ever found, are clearly associated with the males by all non-genitalia characters. The five specimens collected in Chile (probably collected at Royal Society Expedition to Southern Chile, 1958-59) were found in Nothofagus antarctica (G. Forster) Oersted forest (as indicated in the specimens labels).

Acknowledgements. We are very thankful to Erica McAlister, for the loan of the specimens from the BMNH. We thank the Conselho Nacional de Desenvolvimento Científico e Tecnológico (CNPq) for the support provided - processes 141146/2009-5 (DC) and 304713/2011-2 (CJBC). Guillermo Omad is thankful for Consejo Nacional de Investigaciones Científicas y Técnicas (CONICET). And thanks to James J. Roper for the English revision and the reviewers for their useful comments. 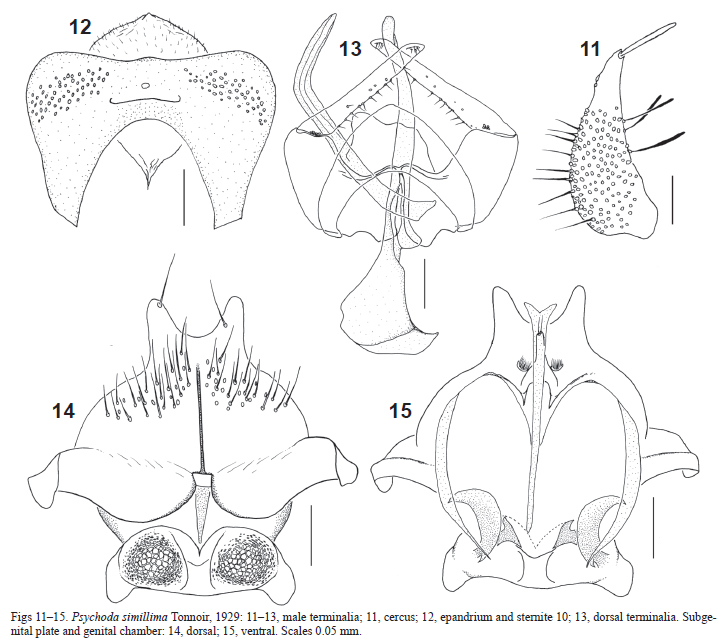