Eosinophilia-myalgia syndrome was described in 1989 in patients who presented progressive and incapacitating myalgia and eosinophilia in blood, fluids and secretions. Most patients report previous L-tryptophan intake. Respiratory manifestations are found in up to 80% of the cases, occasionally as the only manifestation. Treatment includes drug discontinuation and administration of corticosteroids. Here, we describe the case of a 61-year-old female admitted with acute respiratory failure after using L-tryptophan, hydroxytryptophan and other drugs. The patient presented eosinophilia, together with elevated eosinophil counts in the bronchoalveolar lavage and pleural effusion. After discontinuation of the drugs previously used, corticosteroids were administered, resulting in clinical and radiological improvement within just a few days.

Acute respiratory failure as a manifestation of eosinophilia-myalgia syndrome associated with L-tryptophan intake* * Study carried out in the Pulmonology Sector of the Department of Clinical Medicine at the Universidade Estadual de Campinas  UNICAMP, State University at Campinas  School of Medical Sciences, Campinas, Brazil.

Eosinophilia-myalgia syndrome was described in 1989 in patients who presented progressive and incapacitating myalgia and eosinophilia in blood, fluids and secretions. Most patients report previous L-tryptophan intake. Respiratory manifestations are found in up to 80% of the cases, occasionally as the only manifestation. Treatment includes drug discontinuation and administration of corticosteroids. Here, we describe the case of a 61-year-old female admitted with acute respiratory failure after using L-tryptophan, hydroxytryptophan and other drugs. The patient presented eosinophilia, together with elevated eosinophil counts in the bronchoalveolar lavage and pleural effusion. After discontinuation of the drugs previously used, corticosteroids were administered, resulting in clinical and radiological improvement within just a few days.

Eosinophilia-myalgia syndrome (EMS) was described in 1989, appearing in an epidemic manner when several patients presented incapacitating myalgia and peripheral eosinophilia after L-tryptophan intake. This led to the removal of L-tryptophan from the market.(1) Since then, more than 5000 cases have occurred, the majority in female white patients with a mean age of 49 years.(1-4)

L-tryptophan is an amino acid found in lean meats, fish, milk, cheese, nuts, and legumes. It is a natural precursor of serotonin and has been used to raise the organic levels of serotonin, to improve cognitive activities, and to treat depression, as well as to regulate sleep, sexual appetite, sensitivity to pain, and body temperature.(5)

L-tryptophan intake has been implicated as causal agent of EMS.(1,6,7) Some patients might present respiratory complaints and radiological alterations, and occasionally, they present without the involvement of other organs.

A 61-year-old woman presented with a one-week history of progressive dyspnea, dry cough, and fever. She reported no myalgia, exanthema, chest pain, purulent expectoration, hemoptysis, previous pulmonary diseases, or any other chronic diseases, and she described herself as a nonsmoker. She reported weight loss (8 kg) in the last months and depression, for which, three weeks before the respiratory condition, she began taking a 'formula' that included L-tryptophan (2 g/day), 5-hydroxytryptophan (400 mg/day), L-taurine, glutamine, inositol, pantothenic acid, cyanocobalamin, pyridoxine, L-phosphoserine, phosphothreonine, fluoxetine, carisoprodol, and omeprazole.

Upon physical examination, she presented regular overall health status and fever, without alterations in cardiac auscultation. She presented dyspnea and tachypnea (respiratory rate between 28 and 40 breaths/min). Upon inspection and palpation of the chest, reduced and symmetric expansibility was observed. Pulmonary auscultation revealed bilateral coarse crackles and rhonchi, which were predominant in the left hemithorax.

 Initial chest X-ray (Figure 1): extensive areas of consolidation throughout the left lung and with predominantly peripheral distribution in the right lung;

 Initial computed tomography scan of the chest (Figure 2): diffuse areas of consolidation in the left lung (with volumetric loss and air bronchograms), peripheral consolidations, and areas of ground-glass attenuation in the right lung;

 Chest ultrasound: left pleural effusion, without septations, which extended from the base to the upper third of the left hemithorax;

 Testing and culture for fungi and bacteria: negative;

 Bronchoscopy: bronchoalveolar lavage (BAL) with 53,000 cells/mL, with negative results of testing and culture for fungi and mycobacteria, and positive culture for Staphylococcus aureus; 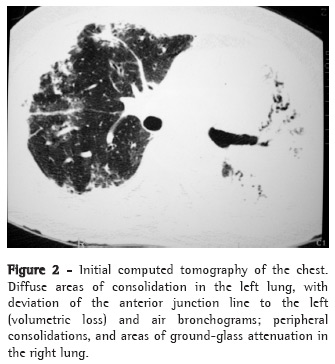 The patient was initially treated for severe community-acquired pneumonia, with antibiotic therapy (ceftriaxone and levofloxacin) and oxygen therapy. After one week, she still presented fever, hypoxemia, and dyspnea upon minimal exertion, without radiological improvement. There was an increase in eosinophilia in the blood (2670 cells/mm3, 16%), which, in conjunction with the pleural eosinophilia and eosinophilia in the BAL, motivated the treatment with 125 mg of methylprednisolone every 6 hours.

The evolution after the introduction of corticosteroid treatment was excellent: there was resolution of the fever and the eosinophilia within three days; after one week, there was improvement of the hypoxemia (SpO2 = 94% on room air) and of the radiological profile, with only a cystic image remaining in the left lung which was no longer detected in subsequent X-rays, being therefore interpreted as pneumatocele (Figure 3).

After 15 days, the patient presented no complaints and maintained SpO2 = 96% on room air. She was discharged with a prescription for oral prednisone (60 mg), gradually reduced until its discontinuation after four months. At the time of this writing, the patient presented fatigue of the proximal muscles of the lower limbs, with no respiratory complaints.

The patient presented acute respiratory failure accompanied by bilateral pulmonary consolidations, together with elevated numbers of eosinophils in the blood, in the BAL, and in the pleural effusion. In the differential diagnoses of pulmonary eosinophilia, the following were considered not very probable: chronic eosinophilic pneumonia (based on the acute clinical presentation); Churg-Strauss syndrome (since there were no signs of peripheral neuropathy and no history of asthma); simple pulmonary eosinophilia (due to the negative parasitological test results and the severe clinical presentation); allergic bronchopulmonary aspergillosis (given the lack of a history of asthma, bronchiectasis, or cystic fibrosis); and hypereosinophilic syndrome (based on the absence of extrapulmonary involvement).

By the time EMS was described, the diagnostic criteria included incapacitating myalgia, peripheral eosinophilia > 1000 cells/mm3, and absence of infection or neoplasia that would explain the clinical symptoms.(2,8,10-12) Although L-tryptophan intake was not a diagnostic criterion, 86 to 97% of the patients reported it, with doses ranging from 500 to 12,000 mg/day, and a four-week to six-year interval between the initial intake and the onset of the clinical symptoms.(2-4) The association described suggests a causal relationship between the drug intake and EMS, although such a relationship could not be confirmed.(6,7,13) Other authors believe that the accumulation of L-tryptophan metabolites is responsible for such clinical manifestations.(1)

The numerous cases of EMS described have widened the range of clinical signs and symptoms, allowing us to state that the disease is characterized by an acute phase, with an approximate duration of four months, in which there might be incapacitating myalgia, fever, weight loss, weakness, dyspnea, cough, chest pain, peripheral edema, arthralgia, exanthema, paresthesia, hyperesthesia, cutaneous thickening, pruritus, dyspepsia, and palpitations, as well as other symptoms.(2,8,11,14) In the chronic phase, fatigue and neurological symptoms (deficits of attention and memory) predominate.(12)

Respiratory symptoms are common in EMS and might be present in up to 80% of the patients,(14) even as the only manifestation. In a study of 1531 cases,(15) cough or dyspnea were present in 611 (59%). In another study,(16) involving 118 patients, respiratory symptoms were found in 64%, radiological alterations in 16%, and pleural effusions in 15%. The pulmonary involvement confers a worse prognosis, and some patients might evolve to acute respiratory failure.(3,4,17)

Complementary tests, in general, show leukocytosis and eosinophilia (values above 3000 cells/mm3 are more suggestive).(11) The chest X-ray might be normal or might present linear or reticulonodular interstitial opacities, diffuse pulmonary consolidations, and pleural effusion.(3,4,10) The pleural effusions might appear in up to one-third of the cases, and generally, they are eosinophilic exudates.(4,10,16)

Of a total of 12 cases reported, 5 were submitted to a tomography scan of the chest.(4,17,18) Consolidations, in general focal and of basal predominance, were detected in four patients; pleural effusion was detected in one patient; and peribronchial nodules in isolation were described in one patient. No extensive consolidations were reported. The small number of patients does not allow us to establish a pattern, although consolidations were found in 80% of the patients.

The syndrome is defined on the basis of clinical and radiological criteria, and the biopsy findings consistent with the diagnosis are not obligatory, especially since there is no typical pattern. Various are the histopathologic alterations described: interstitial pneumonia with predominance of lymphocytes; transmural vasculitis and perivascular inflammatory infiltrate(14); granulomatous vasculitis(2,3); fibrous pleuritis; and follicular bronchiolitis.(3) In the case reported, the transbronchial biopsy fragment showed a focus of incipient non-necrotic granulomatous reaction in the bronchovascular region, findings consistent with granulomatous vasculitis similar to the case described in a study.(3) Open lung biopsy, which would permit a more thorough analysis of the histopathologic findings, was not conducted, since the acute respiratory failure made immediate treatment imperative, and the rapid response to the treatment made the biopsy unnecessary.

The treatment for EMS consists of drug discontinuation and administration of corticosteroids: 5 to 60 mg of oral prednisone a day for four weeks, with subsequent gradual reduction of the dose. Approximately 80% of patients present symptom improvement, the majority within the first three days of treatment, as was observed in this patient. The most refractory symptoms are fatigue and neurological (cognitive) symptoms. The estimated mortality is 2 to 6%, and the majority of deaths are due to ascending polyneuropathy with respiratory failure.(1)

Based on the clinical profile of acute respiratory failure accompanied by peripheral and pulmonary eosinophilia, in a context in which other eosinophilic diseases would be less probable, it is possible to suspect a causal relationship between the acute disease presented and L-tryptophan intake.

L-tryptophan is a substance widely used in Brazil. It is used indiscriminately, and without medical prescription control, since it is part of several 'formulas' used in so-called 'alternative' treatments, as nutritional supplements, or in 'orthomolecular medicine'. Therefore, it is important that we be attentive to the possibility of the appearance of this broad spectrum of clinical manifestations, which, at an extreme level of severity, might evolve to acute respiratory failure and death.