Ileal inflammatory fibroid polyp is a rare non-neoplastic lesion of the gastrointestinal tract. Intussusception caused by an inflammatory fibroid polyps is uncommon. The authors report a case of a 75 year-old female patient presenting with ileal obstruction due to intussusception of a polypoid lesion. The patient underwent surgical treatment and histopathology confirmed the diagnosis.

Ileal inflammatory fibroid polyp is a rare non-neoplastic lesion of the gastrointestinal tract. Intussusception caused by an inflammatory fibroid polyps is uncommon. The authors report a case of a 75 year-old female patient presenting with ileal obstruction due to intussusception of a polypoid lesion. The patient underwent surgical treatment and histopathology confirmed the diagnosis.

A 75-year-old female patient searched medical care complaining of vomiting, severe cramp-like pain, associated with abdominal distension. She reported the onset of symptoms four days before. At physical examination, the abdomen was firm to deep palpation, and hydroaerial sounds were increased. Laboratorial tests did not present significant changes. Afterwards, a simple abdominal x-ray showed distension and bowel loop edema. Since this picture is consistent with acute obstructive abdomen, the choice was to perform an exploratory laparotomy. During surgery, loop intussusception was identified, approximately 15 cm proximal to the ileocecal valve. The manipulation of these bowel loops showed an intraluminal mass as the possible cause. Based on these findings, the choice was to perform a partial enterectomy. This material was histopathologically analized. 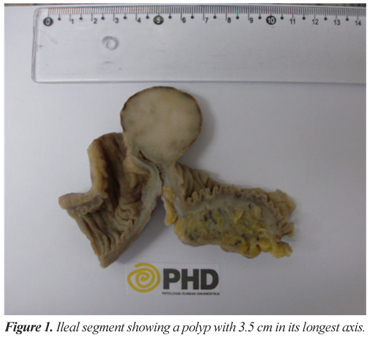 The IFP was first described by Vanek, in 1949, as a "gastric submucosal granuloma with eosinophilic infiltration"1-11. It is a rare type of mesenchymal gastrointestinal tract lesion that occurs as localized polyps mainly in the gastric antrum, and not so often in the small intestine, colon and esophagus, in decreasing order3.

The IFP etiology remains unknown. Some authors believe that it is caused by an exaggerated allergic reaction, due to a persistent inflammatory stimulus. This can be a result of trauma, bacterial infections or chemical injury5,7. Immunohistochemical studies have refused the neural or vascular nature of this lesion because the S100 and the VIII factor are negative8,9. Nowadays, the most accepted hypothesis is that it originates in dendritic cells, due to its immunohistochemical profile, which shows CD34, fascin and cyclin D1 as positive. The absence of c-Kit expression proves that the IFP are not related to the gastrointestinal stromal tumors10. Epigastralgia, vomiting and bleeding are commonly observed when the lesions are located in the stomach. Cramp-like pain, weight loss, bleeding and diarrhea are seen in colonic lesions, while the intussusception and obstruction are symptoms of lesions located in the small intestine4. Such situation occurs due to the presence of intraluminal mass, which can cause a difference in motility between both intestinal segments, thus enabling the bowel loop intussusception1.

Macroscopically, these polyps can range from 1 to 5 cm, even though sizes larger than 20 cm have been described1. They can be sessile or pedunculated, appearing to be nonencapsulated and with mucosa ulceration. Microscopically, the lesion is possibly originated in the submucosa. It is comprised of edematous or fibrous stroma, containing many blood vessels of different calibers4. The fibroblast proliferation of the reaction type presents fusiform and stellate cells intercalated by collagenous matrix6. The balance of these collagen fibers and the proportion of fibroblast cells can be related to the evolution state of the lesion. That is, significant amounts of collagen and few cells can mean that lesions are old. However, those with many cells and little collagen represent newer lesions9. The inflammatory infiltrate is diffuse and includes plasmocytes, lymphocytes, macrophages and eosinophils. Cellular atypia and mitotic activity are not observed4.

The preoperative diagnosis of intussusception is rare, but it can be suggested by a palpable mass in the abdomen or with imaging tests. However, most cases can only be diagnosed with surgery6.

Therefore, IFP is a rare cause of bowel intussusception, which is usually diagnosed intraoperatively, and the resection of the involved bowel loop is the treatment of choice.

Conflict of interest: nothing to declare.