A JL-SDR-IMPATT Device with Improved Efficiency

An attempt has been made to present a new device which will function as a highly efficient SDR (Single Drift Region) P+-N- N+ IMPATT diode utilizing the advantages of a junctionless field effect transistor. The basic idea is to convert a uniform N+ region into a (P+-N-N+) structure without any requirement of physical doping. As the present device works on the principle of a junctionless channel, variability and short channel effects are significantly reduced as compared to the conventional TFET though the requirement of an extra gate increases a few fabrication steps. Further, efficiency more than conventional SDR IMPATT diode is achievable without any physical doping.

The IMPATT (IMPact-Avalanche-Transit Time) diode is a popular transit time device which gains its reputation in microwave (3-30 GHz) and millimeter wave (30-300 GHz) digital and analog communication systems as well as in radar for civilian purposes and for defense systems in missiles. In order to produce negative resistance at microwave frequencies, these diodes utilize impact ionization and transit time properties of semiconductor structures. Impact ionization is a process of formation of additional holes and electrons by knocking them out of the crystal structure due to high electrons and holes velocity. In IMPATT devices, negative resistances arise from two delays (avalanche delay-caused by finite build-up time of avalanche current, transit time delay- caused by the finite time taken by the carriers to cross the drift region) which cause the current to lag behind voltage [1[1] Sitesh kumar roy, Monojit Mitra, “Microwave Semiconductor Devices,” Prentice-Hall of India Private Limited, New Delhi 2003.]. These two delays add up to 180° phase lag at a particular frequency and so the diode resistance is negative corresponding to that frequency.

On the other hand, it is observed that the characteristics of a nano-scale Metal Oxide Semiconductor Field Effect Transistors (MOSFET) have deteriorated owing to continual down scaling in size. Due to continual reduction in the dimensions of the MOS devices, various short channel effects (SCEs) such as Drain Induced Barrier Lowering(DIBL), gate tunneling, punch through, surface scattering etc are very much predominant along with several severe fabrication issues (especially in the sub-20nm channel region). So continuous efforts have been made in the recent years to improve the SCE immunity by using single as well as dual material double gate SOI/SON MOSFET structures [2[2] G. Venkateshwar Reddy and M. Jagadesh Kumar, “A New Dual-Material Double-Gate (DMDG) Nanoscale SOI MOSFET—Two-Dimensional Analytical Modeling and Simulation, “ IEEE Trans. NanoTechnology, S, vol. 4, no. 2, pp. 260-268, March 2005.

[16] D. Ghosh, B. Chakrabarti, M. Mitra “A Detailed Computer Analysis of SiC And GaN Based IMPATT Diodes Operating at Ka, V And WBand”, International Journal of Scientific & Engineering Research, vol. 3(2), Feb 2012 1, ISSN 2229-5518.-17[17] L. P. Mishra, S. Chakraborty, M. Mitra, “A Computer Method for studying unction Depth of SDR IMPATTdiode and a Comparisonofits Performance Based different SemiconductorMaterials”, International Journal of Engineering Science and Technology (IJEST), vol. 3, no. 6, June 2011, ISSN: 0975-5462.]. Since this efficiency is quite low, continuous efforts have been made in the recent years to increase the efficiency.

In this paper, an attempt has been made to present a new device which will function as a highly efficient SDR (Single Drift Region) P+-N-N+ IMPATT diode utilizing the concept of a junctionless field effect transistor. The basic idea is to convert a uniform N+ region into a (P+-N-N+) structure without any requirement of physical doping. Since this device is based on the principle of a junctionless channel, variability and short channel effects immunity improves as compared to the conventional TFET though the requirement of an extra gate increases a few fabrication steps. Besides without any physical doping greater efficiency can be achieved than that of a normal SDR IMPATT diode.

The proposed device structure is a lateral n+-type JLFET which uses two isolated gates (Control Gate and P-gate) of two different metal work functions, to make the layer beneath the gates n-type and p+- type. We have chosen the metal work function as 4.27 eV and 5.93eV for the CG and PG electrode, to make the layer beneath the CG and the PG electrode n-type and p+-type respectively [18[18] Yogesh Goswami, Bahnimann Ghosh and Pranav Kumar Asthana, “Analog performance of Si junctionless tunnel field effect transistor and its improvisation using III-v semiconductor,” RSC Adv., vol. 4, pp. 10761-10765, Jan 2014, DOI: 10.1039/c3ra46535g.
https://doi.org/10.1039/c3ra46535g... -19[19] M. W. Akram, Bahniman Ghosh, Punyasloka Bal, Partha Mondalm, ’T-type double gate junctionless tunnel field effect transistorm,” Journal of Semiconductors, vol. 35, no.1, Jan 2014.]. As soon as the contact is made between metal oxide and the N+ semiconductor, the electrons will flow from the semiconductor to the metal and thus Fermi level goes down and in equilibrium this level is aligned with the Fermi level of the metal. For higher metal work function, more and more electron flow from the semiconductor to the metal and the Fermi level goes down more towards the valence band. In this way, a N+ region can be converted to N and P+ region depending on the metal work function. The CG and PG are both kept at zero bias.

Fig.1
The device structure indicating the N+, N and P+ regions along with the Control gate and P gate where two different metals(indicated by blue and green) and oxide layers(indicated by yellow).

Fig.2
The approximate energy band diagram for the N+, N and P+ regions

where nn- -the carrier concentration in the n region Solving equations (1) and (2) we get,

Again, the position of the Fermi level for a p+ degenerate type region can be written as

where pp+ is the concentration of the p+ region and Nv is the carrier density in the valence band Now, solving equations (1) and (4) we get

Solving the above equations we get,

The conditions for converting the N+ region to intrinsic-type, n-type and p+-regions are and

Now, from the 2D-Poisson's equation, the electrostatic potential profile can be written as

where ND is the donor concentration in the n region of the device, q is the electronic charge and εsi is the silicon substrate permittivity.

where tsi -the substrate thickness

With the introduction of boundary conditions at the surface i. e. , we then derived an expression for a1 (x)

where and tox-the oxide thickness

Now, substituting the above expression of ψ(x, y) in (9), a new differential equation in terms of the surface potential is obtained as

Therefore, the equation (14) simplifies to

Solving the differential equation of (7) we get

have been used to solve for the constants A and B

where Vn+p+ -the applied voltage across the p+ and n+ regions, Vbi - built-in potential

Now the expression of electric field can be obtained from differentiating the equation (16),

where VB is the breakdown voltage and is given by

Considering optimistic situation i. e. the voltage across the drift zone swings to zero thereby making the electric field zero at the maximum negative voltage of the ac voltage i. e. and the with the assumption that , the efficiency can be modified as [23[23] MS. Tyagi, “Introduction to Semiconductor materials and Devices,” John Wiley & Sons, Inc., Hoboken, New Jersey 1991, pp. 312-317.]

In this section, variations of electric field with the length along the drift region for different parameters, efficiency variations with carrier concentration, oxide permittivity and oxide thickness have been studied. Besides efficiency comparison has been made for the junctionless SDR IMPATT and conventional SDR IMPATT. Fig. 3 depicts the variation of the electric field with length along the drift region for two different biasing voltages of 0.5 V and 0.35 V (equivalent electric fields of more than 10 *10 7 V/m), applied across the device i. e. between P+ and N+ regions. For an applied bias of 0.5 V and 0.35 V, the electric field is maximum at the P+-N junction as expected where avalanche breakdown occurs. It is to be noted that in silicon avalanche breakdown occurs at a field of ~5 * 10 7 V/m- for carrier concentration of 1023/m3 which we have used in our calculations[24[24] B. J. Baliga, “Fundamentals of Power Semiconductor Devices,” Springer Science 2008, pp. 91-100, DOI: 10. 1007/978-0-387-47314-7_3.
https://doi.org/10.1007/978-0-387-47314-... ]. It is thus established the occurrence of impact ionization at a biasing voltages of 0.5V and 0.35 V. The electric field decreases as we proceed along the drift region. Eventually it decreases to a value close to zero near the n+ region. Another significant observation is that the electric field decreases comparatively faster as the voltage, applied across the device is increased as with the increase of reverse bias, more and more electrons immobile acceptors are created in the N+ region and therefore the electric field decreases more rapidly at a higher reverse bias. It is depicted in Fig.4 that the electric field profile of the junctionless SDR IMPATT almost resembles that of a normal P+-N-N+ SDR IMPATT diode. In case of junctionless SDR, there may be some excess minority carrier concentration present in the very small gap (if present) between the region under P-gate and C-gate and also in the n-region due to imperfect conversion of the regions due to different metal work functions. So, the electric field decreases slightly in case of junctionless SDR compared to that of conventional SDR. 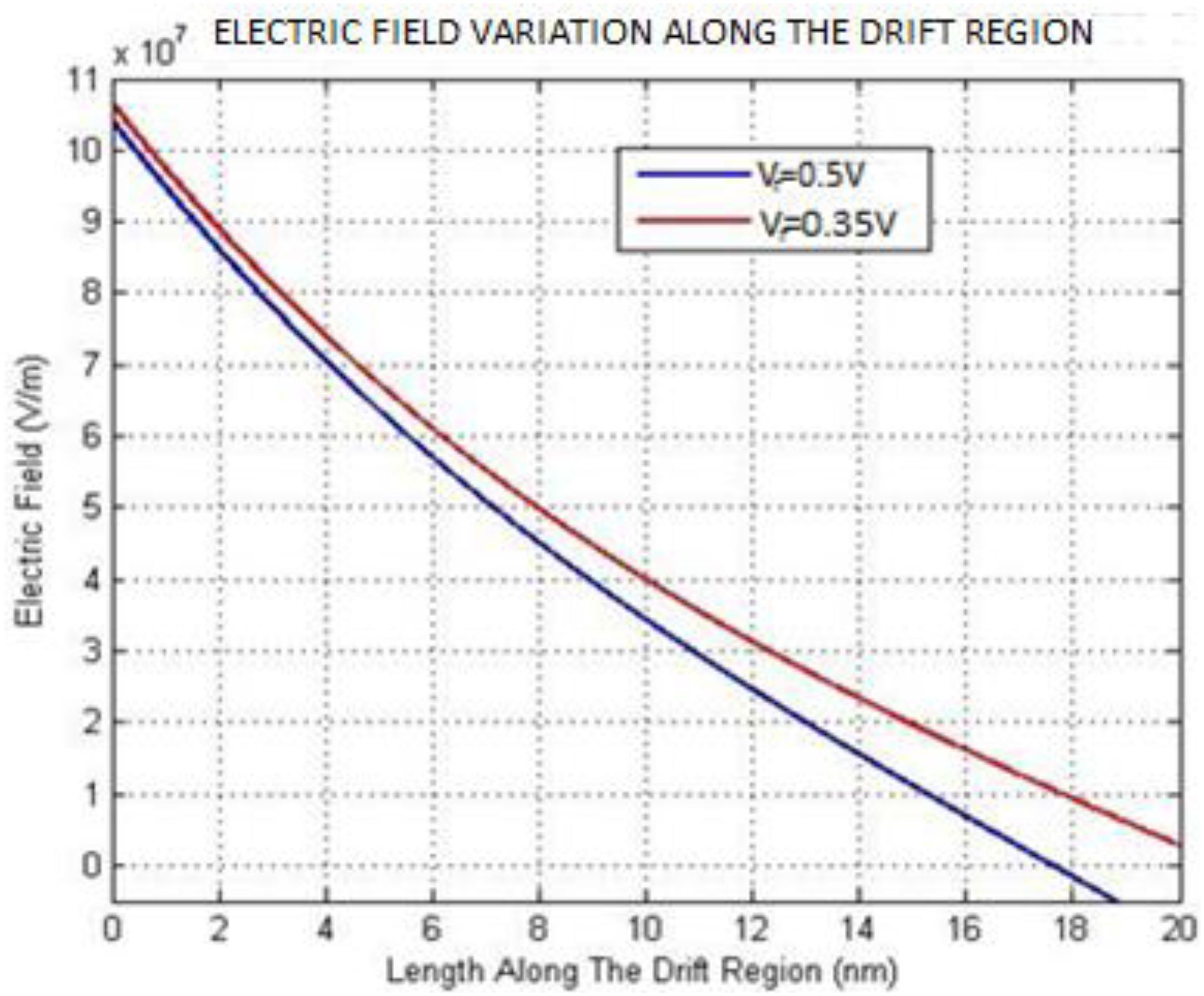 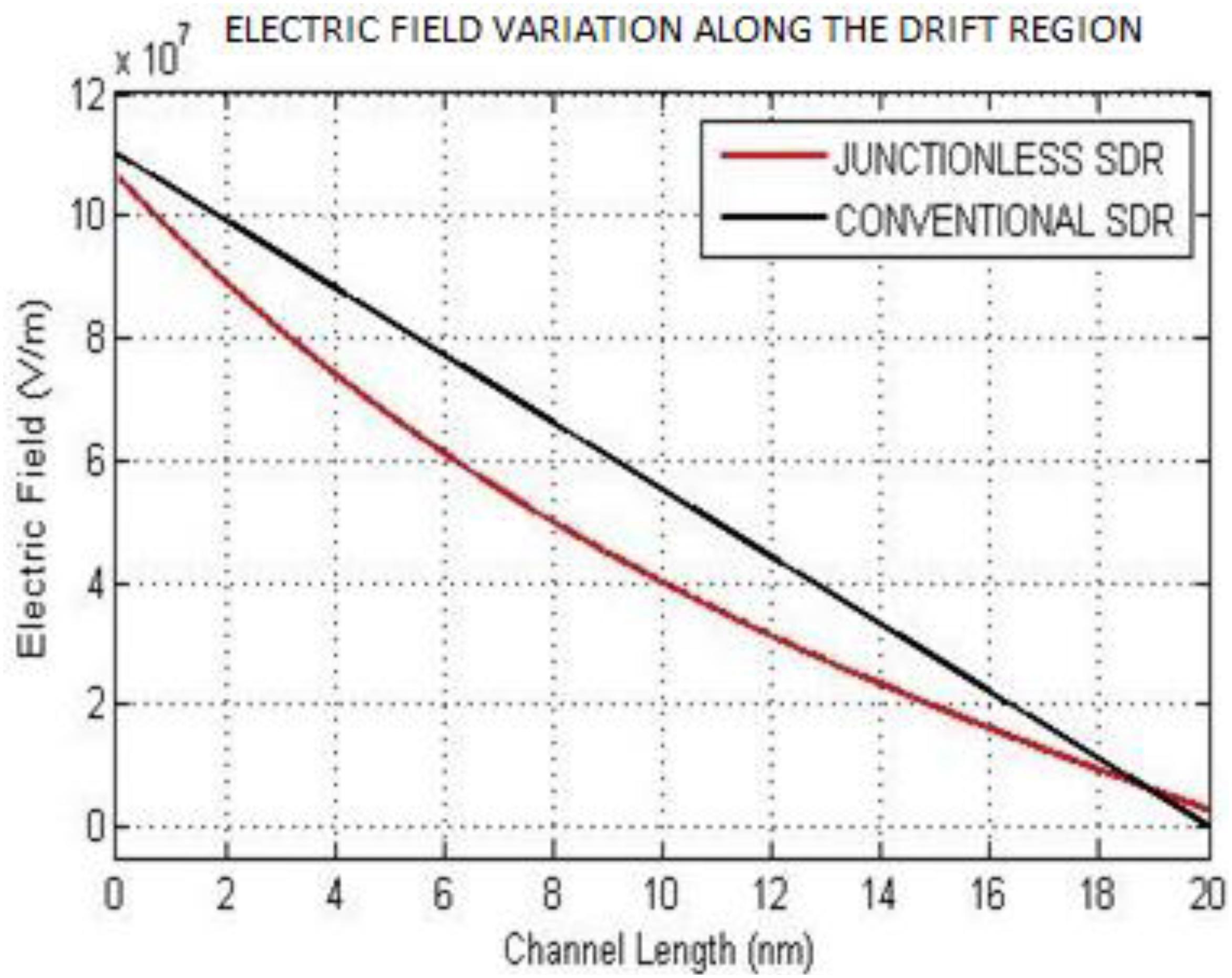 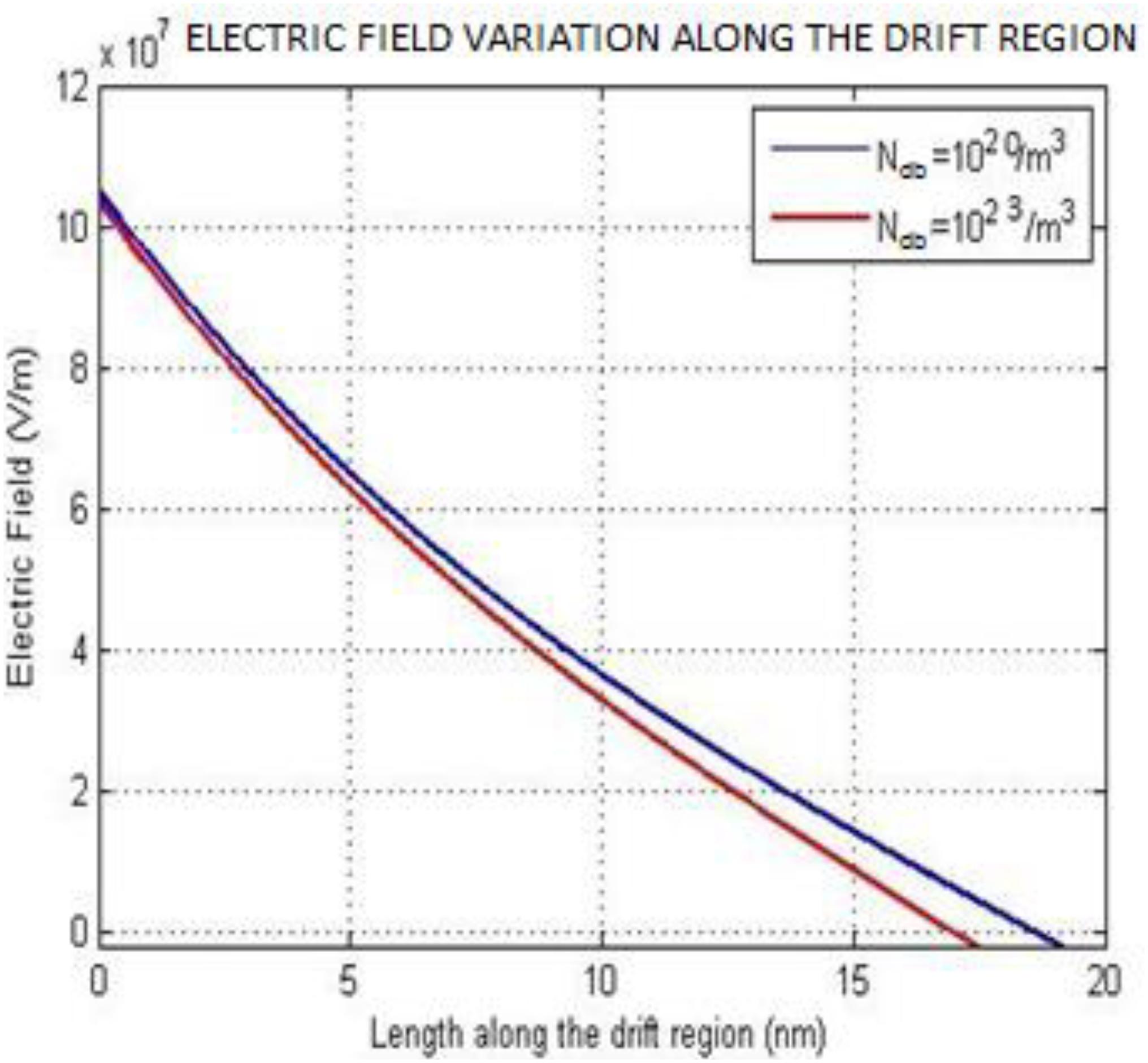 Fig. 8 represents the variation of the efficiency of this device with the oxide thickness as shown earlier in the Fig. 7 but here the variations have been shown for two different applied voltages 0.5 V and 0.35V. As it can be clearly observed that higher efficiency can be achieved for 0.35V compared to the applied voltage of 0.5V. 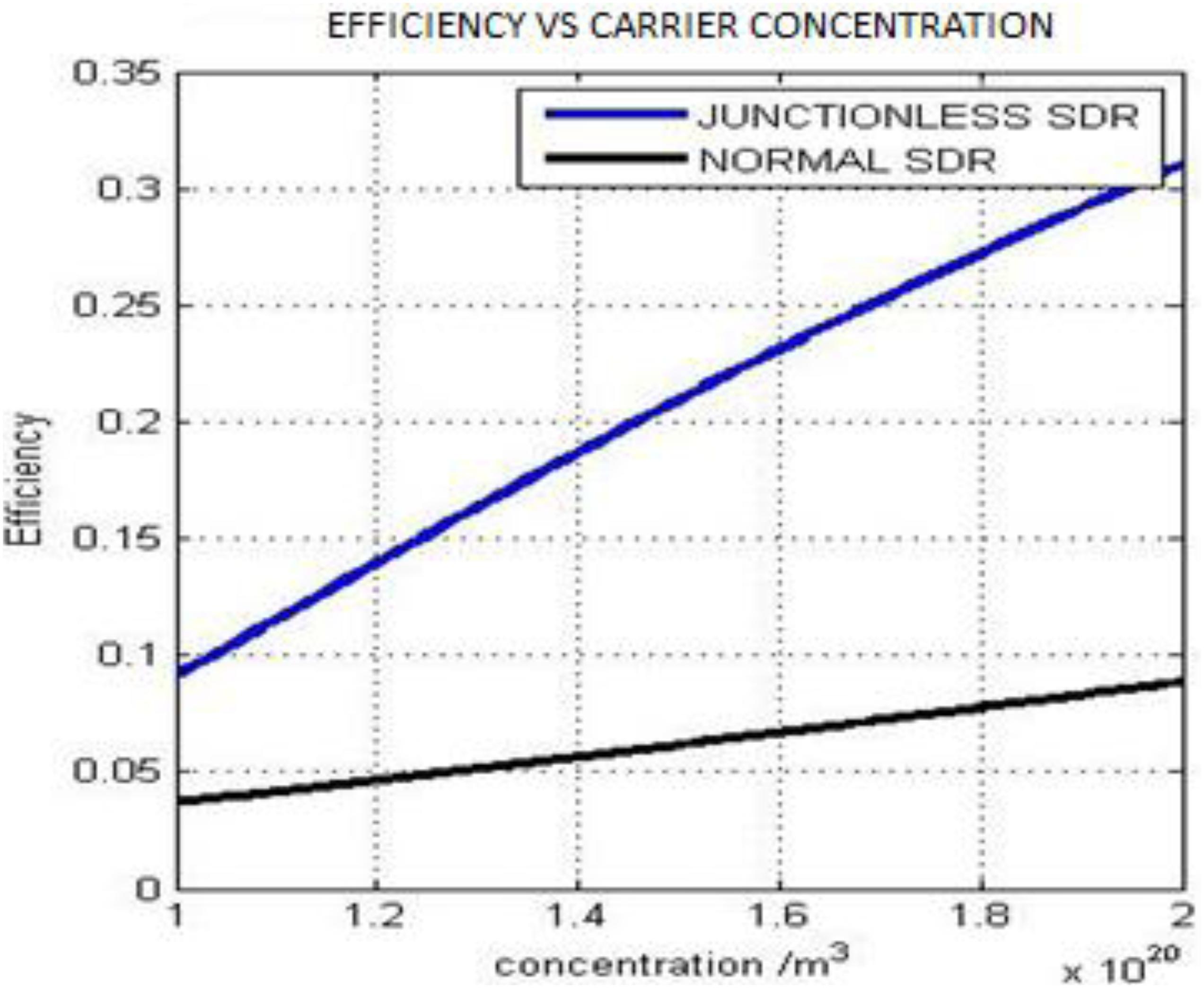 Fig.9
Variation of efficiency with the carrier concentration for a junctionless SDR IMPATT and a normal SDR IMPATT.

In the present work, utilizing the concept and advantages of a junctionless field effect transistor (JLTFET), an attempt has been made to present a new device structure which will function as a SDR (Single Drift Region) P+-N-N+ IMPATT diode The analytical modeling of the electric field profile and the investigation of the efficiency of the proposed device structure have been performed based on the solution of the 2D- Poisson's equation. The proposed device structure does not require any physical metallurgical junctions and no impurity doping for creating the P+ and N+ regions. However, the voltage applied across the P+ and N+ regions can modulate the breakdown voltage and hence the efficiency can also be modulated. The electric field profile of our proposed structure resembles the electric field profile of a normal SDR IMPATT diode and without any physical doping greater efficiency can be achieved than that of a normal SDR IMPATT diode and also the efficiency can be increased by varying oxide permittivity, oxide thickness and applied voltage. However we feel it will be better if we decide the practical implementations only after fabrication and detailed characterization of these devices.

Thumbnail
Fig.1
The device structure indicating the N+, N and P+ regions along with the Control gate and P gate where two different metals(indicated by blue and green) and oxide layers(indicated by yellow).

Fig.1   The device structure indicating the N+, N and P+ regions along with the Control gate and P gate where two different metals(indicated by blue and green) and oxide layers(indicated by yellow).

Fig.2   The approximate energy band diagram for the N+, N and P+ regions

Fig.9   Variation of efficiency with the carrier concentration for a junctionless SDR IMPATT and a normal SDR IMPATT.