Venous malformations, especially absence of inferior vena cava (IVC), are unusual and occasional findings during complementary abdomen examinations or as a consequence of acute venous thrombosis of the vena cava.1 Changes in IVC formation process, which occur embryologically between the sixth and tenth weeks of pregnancy, may result in anatomical anomalies. Among 18 previously described variants, the most frequent abnormalities are IVC duplication, retroaortic left renal vein, transposition or circumaortic left IVC and left renal vein.2-4

Some reports5-7 have described deep venous thrombosis (DVT) in patients with venous congenital malformations. Ruggeri et al.8 suggested and Chee et al.9 confirmed that IVC malformations are a major risk factor for DVT. The combination of intense physical activity and anatomical changes in the vena cava, reducing venous flow velocity, may increase possibility of DVT, especially in the young and in athletes.10

A male, black 16-year-old was admitted to the emergency room complaining of difficulty in moving his lower limbs for 24 hours. He reported losing 14 kg in 4 months, due to diet and daily physical exercises. He denied other antecedents. On physical examination, he presented increased volume in both lower limbs with mild muscle tenderness in the calf and thigh. A neurological assessment was performed, including lumbar fluid puncture, which was normal. A venous color-flow Doppler ultrasonography of the lower limbs was requested, showing bilateral DVT in the IVC, popliteal and iliac veins. Screening of thrombophilia (S protein, factor V Leiden, homocysteine, lupus anticoagulant, antiphospholipid antibodies) was negative.

The patient was intravenously heparinized and prepared for thrombolysis. An ultrasound-guided puncture was performed in both popliteal veins with multiperforated 5F catheters. Both catheters progressed easily until the IVC. However, about 5 cm above the iliac vein confluence, the catheters stopped progressing at a site lateral to the IVC wall (Figure 1). Phlebography was performed, confirming a voluminous thrombosis with increased iliac arteries and extensive collateral circulation above those veins, with no contrast in the IVC. Due to the hypothesis of extrinsic IVC compression, thrombolysis was not performed.

Abdominal tomography was requested, showing absence of a vena cava segment below the right renal vein, at the site where the catheters did not progress during phlebography (Figure 2). The examination was complemented by multislice tomographic angiography (Figure 3), showing common iliac veins forming the IVC to the right, both thrombosed. However, the IVC remained with the azygos vein. This caudal IVC segment was draining to the left polar renal vein with a retroaortic course, forming an arch in the aorta with the right renal vein and presenting preaortic course. In that segment the vena cava was normal, including in the intrahepatic IVC that did not present thrombi. There was no direct communication of IVC thrombosed segment with the intra-hepatic segment.

Because of the diagnosis of IVC malformation and the patient's clinical improvement, even without thrombolysis, we decided to maintain the patient anticoagulated with warfarin and other habitual clinical measures for DVT treatment.

Prevalence of IVC malformations has been estimated in 0.5%. However, this information could be underestimated, since such anomalies are usually asymptomatic and casually discovered in imaging examinations or abdomen surgery.9,13 Absence of IVC infrarenal segment is an extremely rare anomaly. Previous studies report that only 6% of IVC anomalies occur in the renal or infrarenal segments.14 According to a research carried out by Yun et al.,15 only 21 cases confirmed by imaging examinations had been reported in the literature in English until 2004.

Nowadays, it is possible to identify risk factors in around 80% of DVT. However, over the past years, some isolated reports have drawn attention to another risk factor: anatomical anomalies.9 The cases reported in the literature show an incidence between 5 and 7% of IVC anomalies in patients with DVT and increased incidence in the young and in bilateral DVT.8-10

It is remarkable that IVC abnormalities cannot be detected by phlebography or color-flow Doppler ultrasound, which are choice examinations in a DVT episode.16,17 This could be one of the reasons why such malformations are not diagnosed in patients with DVT. Proper screening in DVT cases in the young reaching the iliac or femoral region should be conducted with computed tomography or magnetic resonance.18

There are no data about the best form of conducting a case of DVT associated with IVC anomalies when there is no other associated risk factor. Prolonged use of anticoagulants in those individuals is not associated with any clinical assessment of evidence.

This case report, associated with other cases published over the past years, confirms that anatomical changes in the IVC are a major risk factor for DVT development, and should always be screened in the young.

Finally, we would like to reinforce that vascular surgeons and radiologists should be alert to these vascular abnormalities. Radiologists should distinguish between IVC anomalies and other pathological processes of the retroperitoneum. Vascular surgeons need to recognize these anomalies to perform retroperitoneal and transperitoneal surgeries, as well as abdominal aortic surgeries. Similarly, to introduce vena cava filters, the IVC might be duplicated and the procedure could be useless if such anomaly remains unknown. 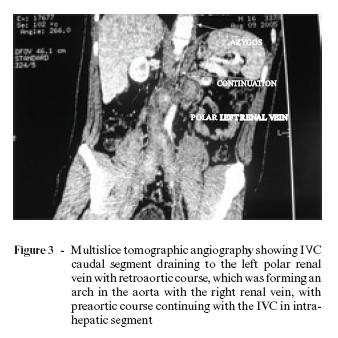