Spontaneous isolated dissection of the superior mesenteric artery: which is the best therapeutic choice?

Spontaneous isolated dissection of the superior mesenteric artery – Which is the best therapeutic choice?

Spontaneous isolated dissection of superior mesenteric artery (SIDSMA) is a rare and difficult to diagnose cause of acute abdominal pain1. A previous study analyzing 6,666 autopsies found an incidence of 0.06% for this condition. Notwithstanding, advances in imaging technology in general and multichannel computed tomography (AngioCT) in particular have allowed to improve the diagnostic accuracy of SIDSMA2-4.

A variety of treatment options have been described for SIDSMA, including conservative treatment, anticoagulation therapy, endovascular repair with stent placement, and open surgical repair.3

The objective of this article is to discuss the best treatment approach in cases of SIDSMA, based on literature review and a case description.

A 45-year-old male patient with no comorbidities presented at the emergency room complaining of severe acute abdominal pain, resistant to common analgesic and antispasmodic drugs. Physical examination revealed a flaccid abdomen, hydro-aerial sounds, no palpable masses or visceromegalies, and absence of any other inflammatory signs.

The patient was clinically treated with fasting and hydration and was subjected to laboratory tests (blood cell count, urea, creatinine, TGO, TGP, FA, GGT, amylase, glucose), all normal. Subsequently, AngioCT images were obtained and showed isolated dissection of the superior mesenteric artery (SMA), starting at 1.7 cm from its origin and extending for approximately 6.5 cm, with slight local dilation to a maximum caliber of 1.4 cm, a discreetly reduced true lumen in medium and distal portions, and blood flow present in both lumens, reentering in the distal portion (Figure 1). 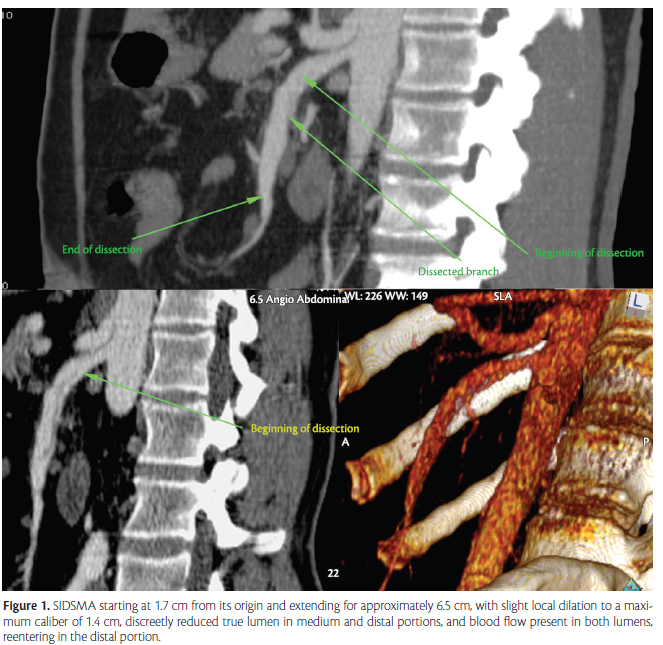 After 5 hours of fasting and hydration, full remission of symptoms was observed.

Part II - what was done?

Due to remission of symptoms and AngioCT findings suggestive of an uncomplicated dissection (according to criteria discussed below), the therapeutic option was immediate anticoagulation therapy with low-molecular-weight heparin.

The patient was admitted to the hospital, and his diet was resumed after 12 hours, with no symptom recurrence.

A new AngioCT performed 3 days after the event evidenced maintenance of dissection, without any change in extent when compared with previous AngioCT. Therefore, the patient was discharged and advised to maintain oral anticoagulant therapy.

After 3 months (latest follow-up), a new control AngioCT scan did not reveal any abnormality in relation to previous exams that might suggest worsening. The patient remains asymptomatic under oral anticoagulant therapy. He will be submitted to new CT exams after 6 and 12 months, and yearly thereafter.

The etiology of SIDSMA has not been completely understood. Even though atherosclerosis, fibromuscular dysplasia, cystic medial necrosis, and conditions affecting elastic tissues (Marfan and Ehlers-Danlos syndromes) may be possible causes of SIDSMA, usually they are not mentioned in the cases described in the literature3. The presence of uncontrolled hypertension, observed in about 30% of the cases, may be an additional risk factor for the occurrence of this condition4. Hemodynamic abnormalities caused by the curvature at the origin of the SMA could be another etiologic possibility, according to Park et al.5.

The natural history of the disease is unclear and varies among cases. Notwithstanding, the following events may occur: 1) limited progression of the dissection, with false lumen thrombosis; 2) progressive dissection towards distal branches of the SMA; 3) artery rupture through the adventitia; 4) rapid expansion of the false lumen, causing narrowing or obliteration of the true lumen and potentially leading to ischemia and intestinal necrosis; 5) aneurysmatic degeneration caused by the dissection or dissection progression with hemorrhage due to rupture of the SMA3,4.

Some authors2-4,6 advocate four treatment options for this condition: 1) clinical observation; 2) conservative treatment with or without anticoagulant therapy; 3) endovascular repair; and 4) open surgery.

At present, there is not a protocol defining indications for conservative or surgical treatment, endovascular repair, or conventional treatment2. Some algorithms have been proposed2,6 to assist in clinical decision-making. In the presence of intestinal necrosis, artery rupture, or any other complication, surgery is mandatory; otherwise, clinical observation with or without anticoagulant therapy seems to be the best therapeutic choice. Primary or secondary endovascular treatment should be reserved for cases with an unfavorable evolution, and conventional surgery to those in whom endovascular treatment fails6 (Figure 3).

Some authors have proposed that conservative treatment should be followed by anticoagulation therapy2,3. This recommendation is reinforced by experience in the treatment of spontaneous dissection of the carotid artery, where anticoagulation is effective in preventing thrombus formation2,3. Other authors,4,5 however, claim that anticoagulation can help prevent thrombosis and obliteration of the false lumen, but may increase the possibility of SMA rupture.

Patients treated in an acute phase with conservative therapy should be closely monitored and underwent tomographic evaluation weekly. In symptomatic cases showing no remission within 7 days, or showing progression of the dissection, surgical treatment should be considered3 (Figure 3).

Park et al.4 observed that most SIDSMA lesions improved or remained stable over the 20-month follow-up period according to AngioCT findings, with clinical assessments showing patients free of symptoms after conservative treatment.

In endovascular repair, the aim of placing stents in the SMA is covering the intimal detachment and preventing blood flow through the false lumen, which could lead to obliteration of the false lumen by thrombosis. The stent should undergo minimal shortening, present good flexibility, adequate radial force, to ensure that it will not migrate as a result of the continuous displacement of the SMA3,8,9. The use of self-expanding stents is recommended in these cases, as their radial force is enough to stand the pressure of the false lumen, which is usually filled with fresh thrombus, and also because these stents adequately accommodate to the diameter of the true lumen.3 Nevertheless, difficulties may be faced in correctly locating entry and reentry fenestrations; in addition, not rarely does the dissection expand to the distal portion of the SMA, causing difficulties to endovascular repair2. There may also be a risk of occlusion of the SMA with stent placement, as well as possible obstruction of side branches located along to this treatment segment2. Although endovascular treatment may be indicated even for patients with no mesenteric ischemia or peritonitis, long-term results should be evaluated.

In relation to conventional surgical treatment, several procedures have been described, including thrombectomy, endoaneurysmorraphy, intimectomy, patch angioplasty, and bypasses with vein or prostheses1,6. Given the invasive nature of these procedures, open surgery does not seem to be justified as a first option, but should be performed in patients who do not respond to endovascular repair.

AngioCT scans should be regularly obtained, after both conservative and surgical treatment, after 1 and 6 months, and yearly thereafter3.

Considering there is no consensus regarding the best treatment approach in SIDSMA, in the present case the conservative treatment approach was chosen, as most authors agree in that only symptomatic patients should be surgically treated. Anticoagulant therapy was also adopted, at least initially, based on the fact it was a young and active patient, in whom intestinal ischemic complications could cause several adverse effects, including a negative impact on quality of life.

There is no consensus regarding the best treatment approach in cases of SIDSMA. Even though indications for surgery are still controversial, this option should be reserved for symptomatic patients, whereas endovascular repair should be the first choice. Nonsurgical approach requires rigorous abdominal AngioCT follow-up, focusing on clinical signs of mesenteric ischemia and blood supply to the SMA, including collateral flow from the celiac artery and inferior mesenteric artery. In the absence of intestinal necrosis or other complications with a clear indication for surgery, conservative treatment, with or without anticoagulation, seems to be the best choice.

PRBV and RLZ are vascular and endovascular surgeons at Angiovalle.

*All authors have read and approved the final version