Bryconamericus is a highly diverse group of characid fishes, being cytogenetic a valuable tool for the delimitation of species. Bryconamericus aff. iheringii (Upper Uruguay/Lower Paraná), B. coeruleus (Upper Paraná), B. cf. ecai e B. cf. eigenmanni (Upper Uruguay) were studied cytogenetically, and presented 2n=52 chromosomes, with interpopulational/interspecific variation of karyotype and fundamental number. Heterochromatin was evidenced in pericentromeric, telomeric and interstitial regions, and it was shown to be an important cytogenetic marker. Single nucleolar organizing regions (NORs) were found in B. cf. eigenmanni, B. cf. ecai and B. aff. iheringii (Lower Paraná), and multiple in B. aff. iheringii (Upper Uruguay) and B. coeruleus, with occurrence of two patterns for the first species, and three for the second. The 5S/18S rDNA-FISH confirmed the location of the NORs and showed single 5S rDNA cistrons only in B. aff. iheringii (Lower Paraná), evidencing the dispersion of both genes, often co-located, in the karyotype of the others species. The data of this work contribute for the delimitation of the species of the genus. Co-localization of ribosomal genes may represent a plesiomorphic condition for the group, and their dispersion suggest the occurrence of duplication, pseudogeneization and transposition events mediated by mobile genetic elements. 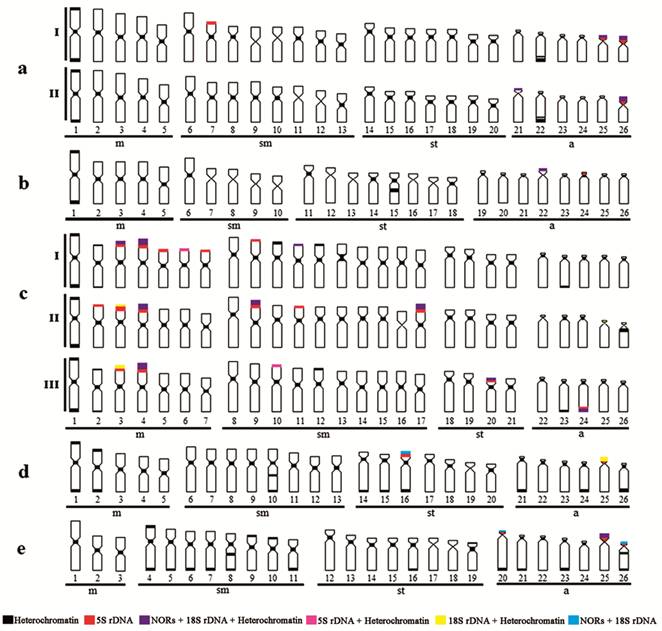