In this study, Fourier transform infrared spectroscopy (FT-IR) was employed to investigate the gaseous pyrolysis products of ethylene - propylene - diene rubber (EPDM). The objective was to evaluate the potential of FT-IR analysis of gaseous pyrolyzates (PY-G/FT-IR) for characterization of EPDM additives. Two EPDM formulations, containing additives typically employed in EPDM rubbers, were analyzed. Initially, gaseous pyrolysis products from paraffin oil, stearic acid, 2,2,4-trimethyl-1,2-dihydroquinoline, tetramethylthiuram monosulfide (TMTM), tetramethylthiuram disulfide (TMTD), and 2-mercaptobenzothiazole (MBT) were characterized separately, and their main absorptions were identified. Subsequently, the gaseous pyrolysis products of raw, unvulcanized, and vulcanized EPDM formulations were analyzed. The similarities observed in the FT-IR spectra of unvulcanized and vulcanized EPDM show that the vulcanization process does not interfere with the pyrolysis products. The identification of the functional groups of the studied additives was possible in both unvulcanized and vulcanized EPDM samples, without solvent extraction. Results also demonstrate that the PY-G/FT-IR technique can identify additives containing sulfur in concentrations as low as 1.4 phr (1.26%) in both unvulcanized and vulcanized EPDM. However, the method showed some limitation due to overlapping and to similarities of TMTM and TMTD PY-G/FT-IR spectra, which could not be distinguished from each other. The PY-G/FT-IR technique is a faster and cheaper alternative to the sophisticated techniques usually applied to detection of additives in rubbers. 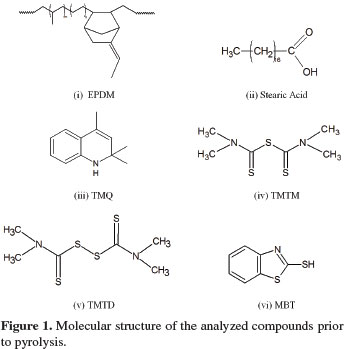