IIIDepartment of Chemistry and Biochemistry, University of Agriculture, Faislabad

IVDepartment of Clinical Medicine and Surgery, University of Agriculture, Faislabad

Poultry sector is one of the most vibrant segments of agriculture sector in Pakistan. It generates direct or indirect employment for about 1.5 million people. Poultry meat contributes about 19% of the total meat production in the country (Ahmad et al. 2010, Ghafoor et al. 2010) and is one of the best available sources for the production of high biological value animal protein. Commercial poultry farming in Pakistan is expanding day by day. However, this sector is still confronted with many problems like coccidiosis which are hindering its progress (Saima et al. 2010).

Avian coccidiosis is caused by obligate intestinal protozoan parasites belonging to genus Eimeria. Eimeria tenella primarily invades and resides in the lining of the cecum of exposed chickens (Allen 1999, Laurent et al. 2001). Infective sporozoits enter the cecal mucosa by penetrating villus epithelial cells, resulting in extensive destruction of the cecal epithelium, hemorrhagic feces, reduction in body weight gain, and decrease in feed efficiency and eventually mortality which lead to serious economic consequences with an estimated worldwide annual loss of more than $3 billion (Williams 1999, Dalloul & Lillehoj 2006). Thus far, chemoprophylaxis and anticoccidial feed additives have controlled the disease but have been complicated by the emergence of drug resistance (Dutta et al. 1990, Kawazoe & Fabio 1994) and their toxic effects on the animal health (Nogueira et al. 2009).

To prevent the emergence of drug resistance, new drugs have been developed and administered on a rotational basis with existing drugs. However, this has resulted in the increased cost of poultry products. Furthermore, drug or antibiotic residue in the poultry products is potentially annoyance to consumer. Therefore, alternative strategies are being sought for more effective and safer control of coccidiosis in chickens (Dalloul et al. 2006, Williams 2006, Abbas et al. 2010). Acids such as fumaric, propionic, sorbic, acetic, and tartaric acid have also been reported for positive influence on feed conversion ratio and growth performance (Vogt et al. 1981, 1982).

In Pakistan, acetic acid is being used extensively as anticoccidial agent in the local poultry industry. According to poultry producers, acetic acid has been found effective against avian coccidiosis, but there is no scientific report available regarding its anticoccidial activity. Therefore, this study has been planned to evaluate the possible anticoccidial effect of acetic acid, if any, employing standard parasitological procedure.

Experimental birds, feed and management. One hundred and ninety eight (1-day-old) broiler chicks (Hubbard Al-Noor Chicks, Pvt) were purchased from local hatchery. Chicks were reared under standard management practices. All the chicks were kept on broiler starter ration up to 2 weeks of age and then fed a broiler finisher. The feed and water were provided ad libitum. The temperature was maintained at 85-90ºF during the first week of age and was reduced by 5ºF on weekly basis. Lighting was provided for 24 hours through out the experimental period. All the birds were vaccinated for New Castle disease on 5th day, for Infectious Bursal disease on 14th day, and for Hydro pericardium syndrome on 18th day of age.

Parasite. Coccidial oocysts were obtained from the caeca of infected chickens and were propagated in broiler chickens by giving oral infection. After obtaining sufficient amount of oocysts, they were sporulated by placing in 2.5% K2Cr2O7 in the presence of suitable humidity and temperature. Sporulated oocysts were cleaned and counted by the McMaster technique (MAFF 1986). The required concentration of the sporulated oocysts (75,000/ ml) was maintained with phosphate buffered saline.

Feed conversion was calculated as the grams of feed consumed to produce one gram of live weight. Statistical analysis of FCR was not possible because of group feeding of birds.

Five chicks from each group were sacrificed for post mortem examination at 7th day of post inoculation (19th day of age). Caecal lesions were scored by the lesion scoring technique described by Johonson and Reid (1970).

An oocyst index (0 to 5) was determined by microscopical examination of scrapings from the caeca of chicks sacrificed for lesion scoring at 7th day of post inoculation (Hilbrich 1978).

Caecal contents of three chicks from each group were removed as soon as possible for the pH measurements on days 3, 5 and 7 post inoculation following procedures outlined by Ruff et al. (1974).

Statistical analysis. Data obtained on various parameters were analyzed by analysis of variance, and the mean values were compared by Tukey test. The differences among group means were considered significant at P<0.05.

To prevent and control coccidiosis, the poultry industry has relied heavily upon prophylactic chemotherapy resulting in the development of resistant strains of Eimeria to all introduced anticoccidial drugs (Chapman 1997). Therefore, recent research has focused on the alternative strategies for the control of avian coccidiosis such as adding acids in the diet (Runho et al. 1997, Thompson & Hinton 1997, Vale et al. 2004). In the present study, acetic acid administered in drinking water has shown the anticoccidial effects against Eimeria tenella in terms of improved weight gains, better FCR, lower oocyst and lesion scores. The coccidiosis can lead to enormous economic losses in the poultry industry due to the intestinal lesions caused by the Eimeria species and subsequent malabsorption of nutrients. The performance improvements observed while using acetic acid (particularly 3%) could overcome these losses.

Acetic acid (CH3COOH) also known as ethanoic acid, is a weak organic acid, which gives vinegar and is a partially dissociated acid in an aqueous solution. Very limited research exists on the effects of acetic acid on poultry health particularly during coccidiosis. However, few reports (Chaveerach et al. 2004, Van Immerseel et al. 2004) are available regarding the antimicrobial effects of organic acids other than acetic acid. These organic acids showed promise in altering bacterial activities and cecal environment in chicken.

In the present study, drinking of acetic acid resulted in protective effects against E. tenella probably by declining pH of ceca and obliteration of oocysts in chickens. Indeed, the improved body weight gains and FCR shown in this work could be due to growth promoting effects of acetic acid that enhanced the feed intake and digestibility.

A number of similar reports of positive effects of organic acids on weight gains (Vogt et al. 1981, Henry et al. 1987, Manickam et al. 1994, Runho et al. 1997, Yeo & Kim 1997, Gunes et al. 2001) support the findings of the current study. On the other hand, there are also some reports (Watkins & Kratzer 1984, Izat et al. 1990, Lee et al. 1993) which differ from the results of present study. According to these researchers, the supplementation of an acid in feed or drinking water did not show any effect on weight gain.

A little bit is known regarding the mode of action of acids against bacteria. In this aspect many researchers have different views. According to some researchers, the antibacterial activity of acids is related to the reduction of pH, as well as their ability to dissociate, which is determined by the pKa-value of the respective acid, and the pH of the surrounding milieu. Acids are lipid soluble in the undissociated form, and they easily enter the microbial cell by both passive and carrier-mediated transport mechanisms. Once in the cell, the acids release the proton H+ in the more alkaline environment, resulting in a decrease of intracellular pH. This influences microbial metabolism, inhibiting the action of important microbial enzymes and forces the bacterial cell to use energy to export the excess of protons H+, ultimately resulting death by starvation. In the same matter, the protons H+ can denature bacterial acid sensitive proteins and DNA. Generally lactic acid bacteria are able to grow at relatively low pH, which means that they are more resistant to acids than other bacterial species, such as Escherichia coli and Salmonella. Lactic acid bacteria, like other gram-positive bacteria, have a high intracellular potassium concentration, which counteracts acid anions (Russell & Diez-Gonzalez 1998).

In general, potential bacterial targets of biocidal compounds include the cell wall, cytoplasmic membrane, and speciûc metabolic functions in the cytoplasm associated with replication, protein synthesis, and function (Denyer & Stewart 1998, Davidson 2001). Although the antibacterial mechanisms for acids are not fully understood, they are capable of exhibiting bacteriostatic and bacteriocidal properties depending on the physiological status of the organism and the physicochemical characteristics of the external environment. Given the weak acid nature of most of these compounds, pH is considered primary determinant of effectiveness because it affects the concentration of undissociated acid formed (Davidson 2001). It has been traditionally assumed that undissociated forms of acids can easily penetrate the lipid membrane of the bacterial cell and once internalized into the neutral pH of the cell cytoplasm dissociate into anions and protons (Eklund 1983, 1985, Cherrington et al. 1990, 1991, Davidson 2001). Generation of both of these species potentially presents problems for bacteria that must maintain a near neutral pH cytoplasm to sustain functional macromolecules. Export of excess protons requires consumption of cellular adenosine triphosphate (ATP) and may result in depletion of cellular energy (Davidson 2001).

Data from the present study indicate that acetic acid has anticoccidial activity against Eimeria tenella in broiler chickens; therefore, it has the potential to be used as an alternative coccidiosis control agent. But the exact mode of action against Eimeria species is not clear. So, further research should be carried out to find out the exact mode of action of acetic acid against coccidia.

Acknowledgements.- To Prof. Dr. Ahrar Khan, Editor Pakistan Veteri-nary Journal for his editorial and technical assistance through out the experiment.

Accepted for publication on September 8, 2010. 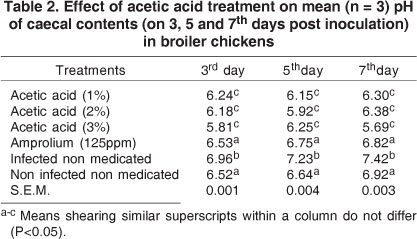