Although a presumptive diagnosis of blackleg and malignant oedema can be made based on clinical and pathological findings, a final diagnosis of these diseases needs identification of the causative microorganisms (Buxton & Donachie 1991).

Traditionally, confirmation of the diagnosis of blackleg and malignant oedema is based on culture and isolation of the microorganisms involved. However, these procedures are not always successful due to difficulties in obtaining, submitting and processing the samples in the laboratory. Also, some of the Clostridia causing blackleg and malignant oedema are extremely sensitive to oxygen, and they tend to be easily overgrown by other microorganisms present in the samples (Assis et al. 2001). Furthermore, culture and identification of Clostridia takes from 4 days to one week to complete, and differentiation between C. chauvoei and C. septicum is difficult due to morphological and biochemical similarities between these organisms (Sterne & Batty 1975).

The fluorescence antibody test (FAT) is frequently used for identification of these microorganisms on tissue or culture smears (Batty & Walker 1963, Pinto & Abreu 1992). This technique requires a fluorescent microscope and labeled antibodies are difficult to obtain commercially, the sections can be stored for only a few hours (Lozano & Ulrich 1968, Larsson 1988), and the tissue morphology is poor. In contrast, immunohistochemistry (IHC) is free of most of these hindrances, and it has been used to identify several microorganisms, including Clostridia, in smears and in tissue sections (Conesa et al. 1995, Vanelli & Uzal 1996a).

Of the many IHC techniques currently available, the streptavidin biotin peroxidase technique (SBPT) is amongst the most sensitive (Gimeno 1995). In this study, a SBPT was optimized to detect C. chauvoei, C. septicum, C. sordellii and C. novyi type A in tissues of guinea pigs experimentally infected with these microorganisms and the results of this technique were compared with those of FAT.

Tissues from fifty guinea pigs that had been previously inoculated intramuscularly with different species of Clostridia were available for this study. The animals had been divided in 5 groups of 10 animals each: animals in groups 1 to 4 had been inoculated with Clostridium chauvoei (strain ATCC 10092), C. septicum (strain ATCC 12464), C. sordellii (strain ATCC 9714), and C. novyi type A (strain ATCC 19402), respectively. All the inocula had been diluted in a sterile calcium chloride solution. Animals from group 5 (control) had been inoculated by the same route with a mixture of calcium chloride and sterile Tioglycollate broth (Barcelona, Dignolab, Spain). Infected animals had been killed when they presented clinical signs. In average, the animals inoculated with C. chauvoei, C. septicum, C. sordellii, and C. novyi type A, were killed at 24, 34, 26, and 36 hours after inoculation, respectively. The control animals were killed at similar intervals as the guinea pigs inoculated with bacterial cultures.

Production of primary antibodies and conjugates

For the FAT and SBPT, the conjugates and the primary antibodies were prepared as previously described by Assis et al. (2001). Briefly, immunoglobulins against C. chauvoei, C. septicum, C. sordellii and C. novyi type A were produced in rabbits and precipitated with a saturated solution (80%) of ammonium sulphate, before being dialyzed against PBS 0.01 M, pH 7.2. The IgG fractions were purified by immunoafinity using a Diethylaminoethyl (DEAE) cellulose column balanced and eluted with Tris/HCL buffer, pH 8.8. The protein concentration was determined using the Biuret method (Gornall et al. 1949) in a spectrophotometer by measuring the absorbance at 560 nm and comparing the results with a 10 mg/ml bovine serum albumin solution (BSA-Sigma, St Louis, USA) standard curve (Harlow & Lane 1988). Part of the purified IgG was used as primary antibody in the SBPT, and the remaining was conjugated. The conjugation of the immunoglobulins was done with fluorescein isothyocyanate (FITC- Sigma, St. Louis, USA). Unconjugated fluorescein was removed by passing the conjugates through of a Sephadex G-50 column balanced and eluted with PBS 0.01 M, pH 7.2. The fractions of conjugates obtained were mixed with glycerol in the proportion of 1:1 and stored at - 20ºC. Sera obtained prior to the immunization of the rabbits were used as normal rabbit sera (NRS) for control slides in the SBPT.

Samples of muscle from the inoculation area (MIA), heart, spleen, liver, and kidney were fixed by immersion in 10% buffered formalin, pH 7.2, for 24 hours, embedded in paraffin wax, cut at 5mm and mounted onto chrome alum-gelatin coated glass slides (Merck, Darmstadt, Germany). Prior to SBPT staining, the slides were incubated at 56ºC during 15 minutes. The SBPT was performed using a commercial Kit (Dako LSAB-peroxidase K675, Dako Corporation, Carpinteria, CA 93013, USA) according to the manufacture's recommendations. DAB (3,3-diaminobenzidine tetrahydrochloride) was used as chromogen, Kit (SK-4100, Vector laboratories, Burlingame, CA 94010), following the manufacturer's recommendations. The sections were then counterstained with Harris's haematoxylin, coversliped and examined under a light microscope. In order to establish the appropriate dilutions, temperature and incubation period for the primary antibodies, sections of MIA from animals in groups 1 to 4 in which Gram-positive bacilli were observed in sections stained with Maccallum-Goodpasture (Luna 1968), were tested by SBPT under different conditions. Primary antibodies and NRS were incubated for periods ranging from 15 min to 2 hours at room temperature, and for 12 hours at 4ºC. Dilutions of primary antibodies and NRS of 1:100 to 1:16,000 in phosphate buffer saline, pH 7.2 (PBS), were tested. After establishing the optimal working dilution, temperature and duration of incubation, sections from all tissue samples were tested using the corresponding primary antibody or NRS.

Smears of MIA, heart, spleen, liver, and kidney were prepared, air dried and fixed in anhydrous acetone during 30 minutes at-20ºC and processed for a FAT according to Pinto & Abreu (1992). FITC conjugates were used diluted 1:512, 1:256, 1:1024 and 1:1024, for C. septicum, C. chauvoei, C. sordellii and C. novyi type A, respectively (Assis et al. 2001). Briefly, the conjugates were diluted in a 2% Tween 80 solution in PBS pH 7.2. The tissue smears were incubated in a moist chamber at 37ºC by 30 minutes. The slides were speedily washed with PBS pH 7.2, immersed in PBS during 15 minutes and washed with distilled water. After this they were counterstained with a 0.005% Evan's Blue (Sigma, St. Louis, USA) solution in PBS for 10 minutes, washed for three times in PBS, mounted with glycerol pH 7.2 and examined under fluorescent microscope (Carl Zeiss, Oberkochen, Germany). These same evaluation criteria described for SBPT were used to determine the laboratory specificity of the FAT.

At necropsy, severe muscular and subcutaneous oedema, associated with haemorrhage, and gas bubbles were observed involving the entire right thigh of all guinea pigs inoculated with clostridial cultures. Histologically, muscular lesions were similar in all infected groups and were characterized by a neutrophilic inflammatory response associated with degenerative changes including hypercontraction and hyalinization of muscle fibers and loss of striations. These changes were associated with variable degrees of interstitial oedema and haemorrhage. Basophilic rods were consistently observed only in the muscle tissue of all infected groups with frequency ranging from 60 to 90% of animals within each group. These rods were located in the interstitium. All uninfected controls had muscular lesions similar to those observed in infected animals although no bacteria were seen. Mild hyperaemia and focal haemorrhages were observed in sections of the liver, spleen, kidney, and myocardium in all groups. Clusters of basophilic rods were observed in sections of the liver, spleen, heart, and kidney from animals infected with Clostridium septicum.

For the SBPT, optimal dilutions of the primary antibodies against C. chauvoei, C. septicum, C. novyi type A and C. sordellii , were 1:2000, 1:4000, 1:5000 and 1:8000, respectively. Preferred incubation times were 15 min, 40 min, 15 min and 1 hour, respectively for these microorganisms. Best staining was obtained when all incubations were performed at room temperature. Under these conditions a very low background staining was observed in all the sections from of G1 to G4 examined. Each primary antibody stained only the tissue samples from animals inoculated with the corresponding microorganism and staining was not observed in any tissue when the primary antibodies were replaced by NRS or in MIA tissues. Cross reactions between the different Clostridial species were not observed.

The finding of Clostridium chauvoei and C. septicum, but not C. sordellii and C. novyi type A in organs other than MIA suggests that the former are more invasive. However, because the guinea pigs were killed as soon as they developed clinical signs (data not shown) we can not be certain about the state of the infection when the animals were killed, and we can not, therefore withdraw final conclusions about the comparative invasiveness of these microorganisms. The larger amounts of C. septicum observed in comparison with C. chauvoei might be explained by the higher replication potential of this agent (Batty & Walker 1965, Sterne 1981, Smith 1984).

The material most frequently submitted to the laboratory for diagnosis of blackleg and malignant oedema is skeletal muscle. However, the presence of C. chauvoei and C. septicum in other organs in this study, suggests that these organs are suitable for the diagnosis of these diseases by the FAT and SBPT, when either of these microorganisms are involved. Nevertheless, our study was performed in guinea pigs and we do not know if the same principle applies to sheep, cattle or other animal species.

The use of purified antibodies in this study allowed us to use high dilutions of these reagents, as well as reduced incubation periods, in comparison with previous reports (Conesa et al. 1995, Vanelli & Uzal 1996a,b), which was possibly responsible for the very low background observed. Our results show that the primary antibodies produced for this study were specific, since they stained only MIA sections from animals inoculated with the Clostridial species against which the primary antibody was produced and no cross reactions with other Clostridia or staining of control tissues were observed.

In this work, the FAT was considered the gold standard since Sterne & Batty (1975, ) stated that positivity to this technique is one of the criteria for diagnosis of blackleg and malignant oedema. Our results confirmed the validity of the mentioned criterion because the FAT detected the corresponding micro-organisms in 100% of the animals inoculated with them.

This study demonstrated that SBPT is a simple and quick method to specifically identify C. chauvoei, C. septicum, C. sordellii and C. novyi type A in formalin-fixed, paraffin-embedded tissues of guinea pigs, and it may complement the bacteriological procedures for the diagnosis of blackleg and malignant oedema, especially where laboratory facilities for anaerobic culture are not readily available, or when specimens for diagnostic are to be sent from areas far from diagnostic centers. This technique also allows retrospective studies using paraffin-embedded tissues.

Finally, SBPT may significantly improve the success rate for the diagnosis of blackleg and malignant oedema. This, in turn, will help establishing the prevalence of these diseases in countries such as Brazil where laboratory facilities are not always readily available. In Brazil epidemiological information about blackleg and malignant oedema is scanty (Correa et al. 1980, Baldassi et al. 1985), and originates mainly from clinical and necropsy findings (Assis et al. 2002).

Our thanks to the Ministério da Agricultura, Pecuária e Abastecimento (LARA, Pedro Leopoldo, Minas Gerais, Brazil), for providing the experimental animals, to E. N. Vidál (Argentina), Marilene de Almeida Campos and Mardelene Geisa Gomes (Brazil), for their invaluable technical assistance, and to Dr Maurício B. Carvalho Filho (LARA-MG, Brazil), for the critical reading of this manuscript. 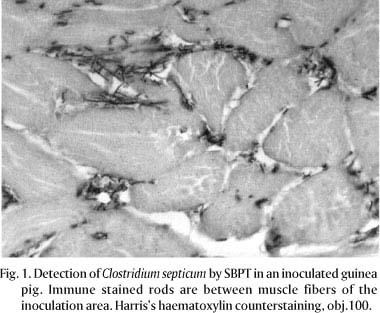 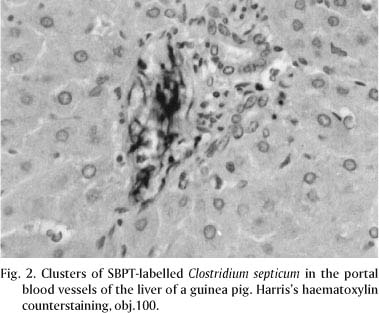 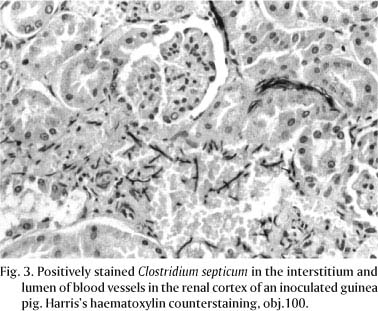