Data from 442 patients who underwent post-CABG surgery between 2012-2017 were retrospectively compared. The right radial route was used in 120 cases, the left radial route in 148, and femoral route in 174. These three pathways were compared in terms of procedure time and fluoroscopy time, efficacy, and complication development. Comparisons among the three groups were performed with Bonferroni test for continuous variables and chi-square or Fisher's exact test for nominal variables as a binary.

Comparison results indicate that femoral access was better than left radial access and the left radial access was better than right radial access in terms of fluoroscopy time (10.71±1.65, 10.94±1.25, 16.12±5.28 min, P<0.001) and total procedure time (17.28±1.68, 17.68±2.34, 23.04±5.84 min, P<0.001). The left radial pathway was the most effective way of viewing left internal mammary artery (LIMA). No statistically significant differences were found among the three groups in other graft visualizations, all minor complications, total procedure and fluoroscopy time "Except LIMA imaging". Mortality due to processing was not observed in all three groups.

In studies related to coronary angiography and percutaneous intervention that were conducted in recent years, transradial access has left its disadvantage in terms of time and performance relative to the transfemoral route, and advantageous in terms of complications[33 Xia SL, Zhang XB, Zhou JS, Gao X. Comparative efficacy and safety of the left versus right radial approach for percutaneous coronary procedures: a meta-analysis including 6870 patients. Braz J Med Biol Res. 2015;48(8):743-50.

Radial access has become the first choice even in the intervention of acute myocardial infarction. Recent comparative studies demonstrate that transradial access is as effective and reliable as transfemoral. It is even better than transfemoral access in terms of complications and comfort. Instead of the femoral path, the radial pathway is used, although not very common in post-CABG angiography. However, CABG imaging with the right radial pathway is not routinely performed[1212 Jolly SS, Yusuf S, Cairns J, Niemelä K, Xavier D, Widimsky P, et al. Radial versus femoral access for coronary angiography and intervention in patients with acute coronary syndromes (RIVAL): a randomised, parallel group, multicentre trial. Lancet. 2011;377(9775):1409-20.,1313 Mason PJ, Shah B, Tamis-Holland JE, Bittl JA, Cohen MG, Safirstein J, et al; American Heart Association Interventional Cardiovascular Care Committee of the Council on Clinical Cardiology; Council on Cardiovascular and Stroke Nursing; Council on Peripheral Vascular Disease; and Council on Genomic and Precision Medicine. An update on radial artery access and best practices for transradial coronary angiography and intervention in acute coronary syndrome: a scientific statement from the American Heart Association. Circ Cardiovasc Interv. 2018;11(9):e000035.].

From November 2012 to July 2017, 758 post-CABG surgery patients with coronary angiography presented themselves at our facility with typical chest pain, newly developed wall motion defect, acute coronary syndrome, or coronary artery disease. Patients with severe skeletal anomalies, limb loss, advanced heart failure, opaque allergy, and communication impairment, aortic diameters of 5.5 cm and above, severe aortic plaque burden, five or more grafts, or process time exceeding the confidence interval due to various reasons (vascular origin anomalies and severe vascular tortuosity and so on) were excluded from the study and not included in the comparison. 442 post-CABG surgery patients - 119 females and 323 males - and undergoing angiography, who were 44 to 96 years old, were selected for this study.

The study was conducted according to Declaration of Helsinki, considering ethical principles for medical research involving human subjects. Patients were asked to sign an informed consent form since it can be used in a retrospective study. In this way, all patients participating in the study gave written, informed consent and authorized local ethics committee in clinical research to approve the study.

The primary endpoint of this study was the total procedure time started after the sheath was inserted and terminated after pulling the catheter. Fluoroscopy time was assessed because it correlated with the cumulative radiation dose. Amount of opaque material used correlates to the amount used for imaging purposes in each process for each case. Graft imaging success correlates to, the determined number of grafts in each group attached to the native vessels. Finally, angiography was performed by using opaque material from the first point of grafts in the aorta. The ratio of the number of selective viewing in each group to the number of grafts was considered as the basis for comparison. We did not know in which patient the LIMA was used as a graft, so we displayed LIMA in each patient. LIMA efficacy and LIMA imaging success were recorded for each case, and complication development - local hematomas, severe hematoma, hemorrhage, radial artery spasm, radial artery occlusion, pseudoaneurysm, cerebrovascular accident, mortality and morbidity - were recorded during the first month after the procedure.

Patients with palpable right and left radial arteries were subjected to the Allen's test and Barbeau's test. In patients who underwent Barbeau's test, and whose right and left radial angiographies were not appropriate, the procedure was performed on the femoral route. In patients who were eligible for radial access, the radial region was anesthetized with 5% prilocaine, 1 mg nitroglycerin solution. 5F sheet was preferred for radial angiography because it was more comfortable with less radial arterial occlusion and spasms than 6F[1616 Polimeni A, Passafaro F, De Rosa S, Sorrentino S, Torella D, Spaccarotella C, et al. Clinical and procedural outcomes of 5-French versus 6-French sheaths in transradial coronary interventions. Medicine (Baltimore). 2015;94(52):e2170.]. The radial artery was cannulated with 5F Terumo(r) glidesheath(tm). Then, left and right coronaries were displayed with diagnostic catheters from Boston(r) and Alvimedica(r). "Amplatz Left 1" and "Amplatz Left 2" were used if the Judkins catheters were not sufficient to display the aortocoronary bypass grafts, except for LIMA (Figures 1 and 2). 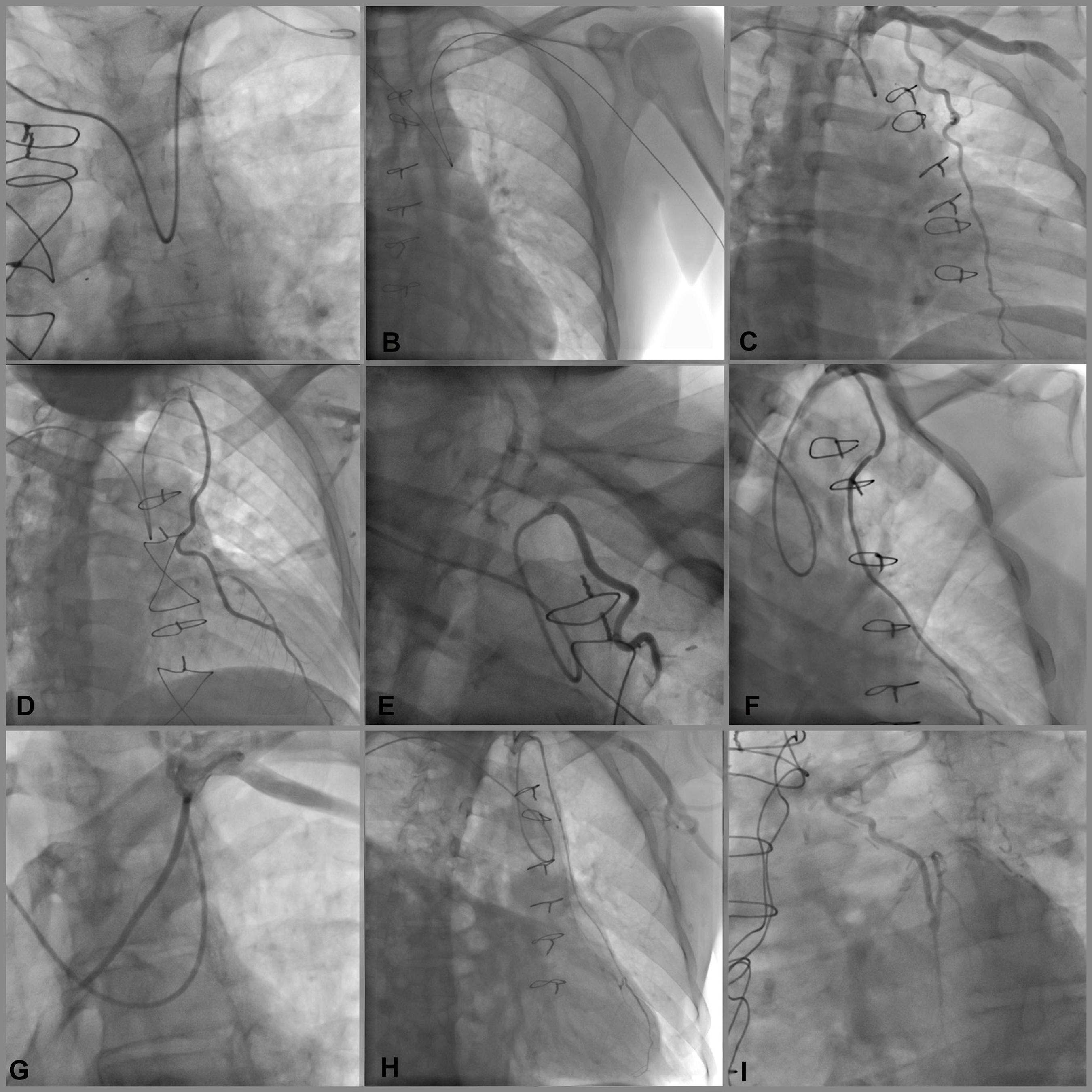 Medtronic(r)'s IMA catheter was used for LIMA imaging on the left radial and femoral route.

To view the LIMA with the right radial pathway at the beginning of the procedure, firstly, aortography was performed to determine the type of aorta. LIMA imaging with right radial access is often possible in all aortic types except for type IV, where the incidence is between 3-6%, including "arteria lusoria". After the course of aortography, we engaged the left subclavian artery with the 3.5 JL catheter, then pushed the 0.35 guidewire towards the left brachial artery followed by JL catheter exchange with IMA catheter. LIMA can then be displayed with several rotation movements. In anomalous cases, if we cannot engage grafts with existing catheters, we were able to achieve imaging by catheter reshaping in the laboratory environment[1717 Erden I, Golcuk E, Bozyel S, Erden EC, Balaban Y, Yalin K, et al. Effectiveness of handmade "Jacky-Like Catheter" as a single multipurpose catheter in transradial coronary angiography: a randomized comparison with conventional two-catheter strategy. J Interv Cardiol. 2017;30(1):24-32.

After sterilization of the femoral site for femoral angiography, local anesthesia with 5% prilocaine was applied to the femoral region. The femoral artery was cannulated with a 6F sheet. The right and left coronaries were displayed, followed by aortocoronary bypass grafts visualized with the right diagnostic catheter. LIMA was displayed with IMA catheter (Figure 1).

Continuous variables are presented as means ± standard deviations and 95% confidence intervals were determined. Nominal variables were presented as numbers and percentages. Comparisons between the approaches were performed with Student's t-test and one-way ANOVA for continuous variables and Chi-squared or Fisher's exact test for nominal variables. A 2-sided P-value less than 0.05 was considered significant. The groups with significant differences compared to continuous variables were post hoc analyzed. The post hoc analysis was performed using one-way ANOVA test with least significant difference (LSD) and Bonferroni methods'. Statistical Package for the Social Sciences version 11.0 (SPSS, Inc., Chicago, IL, USA) was used to analyze data.

Fig. 4
The graphical comparison of data on duration of procedure and fluoroscopy.

There was no difference between the femoral and left radial groups in terms of major bleeding, pseudoaneurysm, allergic reaction, hypotension, opaque nephropathy, and major bleeding (Table 2).

Coronary angiography and the percutaneous vascular interventions are performed to compare the right radial access versus the left radial access. In our opinion, the transradial coronary and peripheral angiographies are still in development.

In the first few years, bypass angiographies performed by the femoral route started to be performed with the spread of the radial pathway. In the first studies of comparing the left radial with the femoral route, the duration of the left radial route and complication development were similar[2020 Pasley TF, Khan A, Yen LY, Newcombe R, Humphreys H, El-Jack S. Left radial versus femoral access for coronary angiography in post-coronary artery bypass graft surgery patients. J Invasive Cardiol. 2016;28(3):81-4.].

In the post-CABG angiography procedure, the first preferred radial route is the radial access, since it resembles the femoral route. However, most of the coronary angiographies are performed on the right radial route due to the frequent occurrence of radial artery occlusion, the use of the left radial artery as a graft, because the angiography table is usually designed from the right side, and the angiography laboratories are better suited for right-handed operators[2121 Velez E, Boyer N, Acevedo-Bolton G, Hope MD, Boyle A. CT-reconstructed three-dimensional printed models of the right subclavian artery and aorta define age-related changes and facilitate benchtop catheter testing. J Invasive Cardiol. 2014;26(10):E141-4.,2222 Sciahbasi A, Romagnoli E, Burzotta F, Trani C, Sarandrea A, Summaria F, et al. Transradial approach (left vs right) and procedural times during percutaneous coronary procedures: TALENT study. Am Heart J. 2011;161(1):172-9.].

According to the results obtained, the femoral path was better in terms of total procedure time and fluoroscopy time. However, it can be estimated that these times will improve in the future with increased experience.

Radial artery occlusion, hematoma, radial artery spasm, left radial and right radial access are not different. Nevertheless, the femoral path is disadvantageous according to radial pathway in terms of comfort loss, hematoma, and other complications.

Fig. 4   The graphical comparison of data on duration of procedure and fluoroscopy.