There are two main types of penetrometers. In the static one, a rod with a conical tip is introduced continuously and gradually (nearly statically), simultaneously registering the reaction force, which is equal to the soil resistance. The dynamic penetrometer uses the same rod. However, it is introduced through bringing about an impact mass in freefall. Thus, the theory can be treated by Newtonian dynamics so as to obtain dynamic resistance. The aim of the software is to provide a quick tool, facilitating the computation of soil resistance data for the latter type of penetrometer, yielding tables and graphs already in scientific format. Developed in VBA (Visual Basic for Applications) programming language, it uses Excel as the user interface due to its popularity. It basically consists of two worksheets, Sheet 1 and 2: Sheet 1 - this is for data entry (number of impacts and depth). Concomitant with typing in data, the resistance table is prepared with the respective graph, accepting up to 40 profiles. Sheet 2 - it has a special equalizing function, i.e., it standardizes depth in constant layers, unifying all profiles in a single table. For that purpose, after selection of a layer thickness (e.g., 5 cm), the program collects the resistance data (MPa) from Sheet1 and interpolates the values for depths of every 5 cm. After performing this procedure for all the tables in Sheet 1, the program generates, in Sheet 2, a single table with all the profiles and the overall average, with their graphs. The user can select the profiles - for example, only those measured in the plant row or interrow - or even exclude profiles. As a supplement aim, this study describes the evolution of the "Impact penetrometer" project, which began in 1982, and whose technique came to be adopted in the scientific community after publication of the theory in this journal in 1991. A survey of the scientific community over the past three years (2010-2012) is also presented, providing a view of the main current applications. 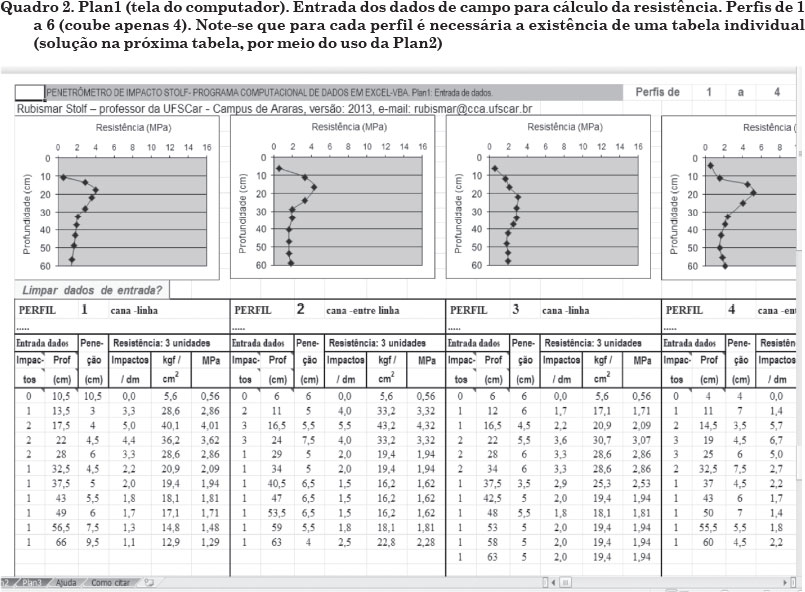