Adults of Eumeninae feed on nectar while the larvae are predators. Females build the nest that can be dug, made with mud or even occupying pre-existing cavities, and hunt caterpillars to provide food for the larvae (Evans 1956; Krombein 1979; Carpenter & Marques 2001; Hunt et al. 2003).

Among the natural enemies of Eumeninae there are birds, ants (Ecitoninae), bats and parasitoids (West-Eberhard et al. 1995). Insect parasitoids develop feeding on immature stages of other Arthropoda, usually killing the host (Doutt 1973; Godfray 1994). Hymenoptera is the group with most representatives among parasitoids, being responsible for 75% of the species, but this behavior also appears in other orders as Diptera, Coleoptera, Lepidoptera, Trichoptera, Neuroptera and Strepsiptera (Krombein 1967; Askew 1971; Quicke 1997).

The records presented here were made in two localities from Mato Grosso do Sul state, mid-western Brazil; both located in the Chacoan sub-region, Cerrado province (Morrone 2014). We collected four nests of Eumeninae, built with mud and set on shrubs, in the municipality of Dourados (22°11'41''S; 54°55'45''W); and one mud nest in Parque Nacional da Serra da Bodoquena (20°44'24''S; 56°44'13''W). The nests were brought to the Universidade Federal da Grande Dourados, and kept at approximately 26°C. Voucher specimens are deposited at the Museu de Biodiversidade (MuBio - Universidade Federal da Grande Dourados), Mato Grosso do Sul, with the exception of one specimen of Diptera that was deposited in the MZUSP collection.

Four species of Eumeninae were recorded as hosts to five species of parasitic insects (Table I). The first nest of Cyphomenes anisitsii (Brèthes, 1906) was collected in January 2009, measuring 1,7 cm x 3,8 cm (diameter/length). At 21 March 2009 the first wasp (♂) emerged, and the three other wasps (♀) emerged after an interval of 48 hours each. Finally on 31 March 2009 a Bombyliidae (Diptera), Toxophora leucon Séguy, 1930 (Fig. 1a), emerged four days after the last wasp had emerged. The second nest of C. anisitsii was collected in November 2011, measuring 1,5 cm x 3,5 cm (diameter/length). One cuckoo wasp (♂), Pleurochrysis sp. (Fig. 1b), emerged on 20 December 2011. The potter wasp C. anisitsii emerged three days after the parasitoid.

On February 2014 we collected one nest of Pachodynerus nasidens (Latreille, 1812), containing tree cells, with 1.7 cm x 0.8 cm (length/diameter) each. The first insect that emerged was a potter wasp (♀), and after a few hours a parasitoid beetle Rhipiphoridae (Coleoptera), Macrosiagon sp., emerged (Fig. 1e). One male of P. nasidens failed to complete development and died in the nest.

Cuckoo wasps are common parasites of potter wasps (Krombein 1967; Gauld & Hanson 1995; Sears et al 2001). In Brazil, the interaction between cuckoo wasps and Eumeninae has been described by Camilo (1999), who recorded one species of Chrysididae parasitoid of Brachymenes dyscherus (Saussure, 1852) in Cerrado from São Paulo state. Here we obtained the first host association of Pleurochrysis sp. and Chrysis sp. (gr. intricans) on Cyphomenes and Minixi, respectively. Pleurochrysis is strictly Neotropical, while Chrysis is better represented in the Nearctic region (Kimsey & Bohart 1990).

Plega is restricted to the Americas, with four species recorded from Brazil; P. beardi was only recorded for the Amazon region, in Para state (Penny 1982; Penny & Costa 1983; Maia-Silva et al. 2013). The larvae of Plega feed on immature stages of Hymenoptera, as for example the eumenine genus Zethus and eusocial bees in Brazil, and crabronid wasps of the genus Trypoxylon and the bee genus Hylaeus in Trinidad (Smith 1863; Penny 1982; Penny & Costa 1983; Linsley & Mac-Swain 1955; Ohl 2004; Buys 2008; Hook et al. 2010; Maia-Silva et al. 2013). This is the second record of Plega beardi, and the first record of Montezumia as host of Plega.

Beetles of the genus Macrosiagon have already been recorded using eumenine wasps and cockroaches as host in the Oriental, Palearctic, Nearctic and Australasian regions (Krombein 1967; Callan 1981; Mathews & González 2004; Batelka & Hoehn 2007; Batelka 2013). Hunt (1993) already supposed that Macrosiagon could be hosted by P. nasidens.

There are few records of insect parasitoids of Eumeninae in South America, but it seems that, with the exception of Hymenoptera, most groups have generalist habits, using different wasp species as hosts (Krombein 1967). Knowledge of the natural enemies of Eumeninae can help in the interpretation of their nesting behavior, which in turn, acts as key part to understanding the evolution of social behavior, since these wasps range from solitary to primitively social (Hermes et al. 2013). 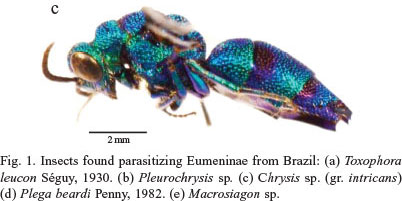