Phytochemical and pharmacological profile of plants indicated by caboclos of Jaú National Park (AM) as potential analgesic: part I

This work aimed to study the pre-clinical pharmacology and phytochemistry of three plant extracts, obtained from two of the 42 plants with potential analgesic and / or anti-inflammatory, indicated by the residents of the National Park of Jaú, AM. The hydroalcoholic extracts were subjected to phytochemical characterization by thin-layer chromatography (TLC). Tests for pre-clinical pharmacology employed were: initial screening, rota rod, motor activity, hot plate, tail flick and abdominal contortions at doses of 300 and 500 mg / kg. The three extracts were obtained from the bark of cumandá: Campsiandra comosa Benth., Fabaceae (EHCC) and leaves (EHSF) and bark (EHSC) of sucuuba: Himatanthus sucuuba (Spruce ex Müll. Arg.) Woodson, Apocynaceae. The phytochemical analysis revealed the presence of flavonoids, tannins, triterpenes and iridoids in different extracts, while the alkaloids and coumarins were not detected. Research has shown pharmacological activity for EHSF and EHCC extracts, only in the mild analgesic test for abdominal contortions, while no change was observed in the rota rod; and in general, there was decrease in motor activity in all extracts at different doses tested. Different extracts of these plants are being tested in other models by the same working group, in order to deepen the knowledge about the pharmacological profile of these species. 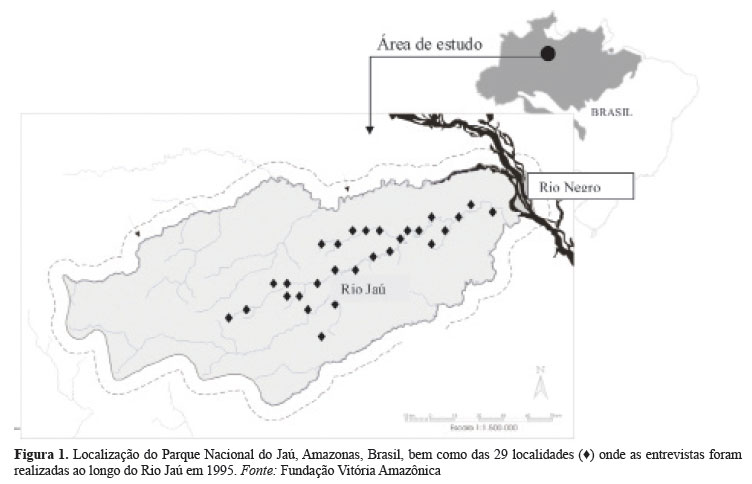 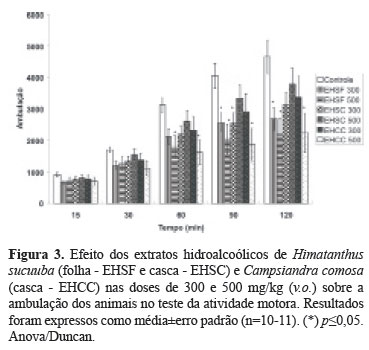 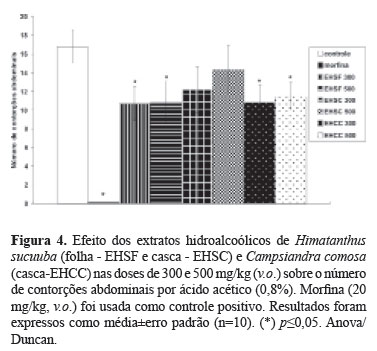