A multicenter feasibility study of chronic graft-versus-host disease according to the National Institute of Health criteria: efforts to establish a Brazil-Seattle consortium as a platform for future collaboration in clinical trials

A multicenter feasibility study of chronic graft-versus-host disease according to the National Institute of Health criteria: efforts to establish a Brazil-Seattle consortium as a platform for future collaboration in clinical trials

BACKGROUND: New criteria for the diagnosis and classification of chronic graft-versus-host disease were developed in 2005 for the purpose of clinical trials with a consensus sponsored by the National Institute of Health.

OBJECTIVES: The aim of this study is to present the results of a multicenter pilot study performed by the Brazil-Seattle chronic graft-versus-host disease consortium to determine the feasibility of using these criteria in five Brazilian centers.

METHODS: The study was performed after translation of the consensus criteria into Portuguese and training. A total of 34 patients with National Institute of Health chronic graft-versus-host disease were enrolled in the pilot study between June 2006 and May 2009.

CONCLUSIONS: It was feasible to use the National Institute of Health consensus criteria for the diagnosis and scoring of chronic graft-versus-host disease in a Brazilian prospective multicenter study. More importantly, a collaborative hematopoietic cell transplantation network was established in Brazil offering new opportunities for future clinical trials in chronic graft-versus-host disease and in other areas of research involving hematopoietic stem cell transplantation.

The historical classification of chronic GvHD proposed in 1980 included limited disease (i.e., only localized skin and/or liver involvement) and extensive disease (i.e., generalized skin or limited disease plus involvement of other organs).(9) In 2001, the classification was revised to distinguish patients who required systemic immune suppression from those who did not.(3) Although highly reproducible among transplant centers, the Seattle revised chronic GvHD criteria did not stratify patients according to outcomes.(18,19)

Unlike other innovations in HSCT, progress in chronic GvHD has been slow due to the variability of the clinical manifestations of this syndrome, the lack of consistent diagnostic laboratory findings, the limited understanding of its pathogenesis and the slow accrual of patients in clinical trials.(20-22) In the last 6 years however, the growing interest in chronic GvHD research has been spurred by the National Institute of Health (NIH) sponsored consensus project in chronic GvHD that included six working groups of multidisciplinary experts on diagnosis and staging, histopathology, biomarkers, response criteria, supportive care and design of clinical trials. Each of the six working groups presented their reports at the June 2005 NIH Consensus Meeting on critical issues for future research in chronic GvHD.(20) Recommendations for future clinical trials by each of the NIH consensus working groups have been published based on experts' opinion due to insufficient data at the time to provide evidence-based recommendations.(23-28)

In an effort to foster collaboration and expand the network for future clinical trials in chronic GvHD, a Brazil-Seattle consortium was established between HSCT investigators from the Fred Hutchinson Cancer Research Center (FHCRC) and from five Brazilian institutions. The current manuscript describes the establishment of the Seattle-Brazil consortium as a platform to conduct future collaborative studies in chronic GvHD and other HSCT areas and presents the results of the first 34 patients enrolled in a pilot study to determine the feasibility of conducting a multicenter, prospective, observational clinical trial in chronic GvHD using the NIH criteria(23) in five Brazilian institutions between June 2006 and May 2009.

The Brazil-Seattle consortium was established in 2008 by a Brazilian-American expert in chronic GvHD and other late effects of HSCT at the FHCRC in Seattle and by investigators with common research interests from five Brazilian institutions (Universidade Estadual de Campinas, Instituto Nacional de Câncer in Rio de Janeiro, Universidade Federal do Rio de Janeiro, Universidade Federal do Paraná in Curitiba and Hospital Amaral Carvalho in Jaú). The objective of the consortium was to establish a platform to conduct future collaborative studies in chronic GvHD and other research areas in HSCT between investigators in Brazil and Seattle. The consortium consists of a multidisciplinary team of HSCT physicians, one dermatologist, dentists, psychiatrists, psychologists, physiotherapists and two data managers. Medical training was conducted at the FHCRC for most of the physicians and one dentist, and was extended to others members of the teams in Brazil.

The consortium held monthly teleconferences with investigators from Brazil and Seattle and met at least twice yearly during annual meetings of the American and the Brazilian Societies of HSCT and Hematology. After completion of the chronic GvHD training and translation to Portuguese of the NIH consensus criteria, a pilot study to determine the feasibility of conducting a multicenter, prospective, observational clinical trial in chronic GvHD was initiated by the consortium upon approval of the institutional review boards of each of the five participating centers.

The inclusion criteria were over 2-year-old patients with a diagnosis of chronic GvHD by NIH criteria(23) that required systemic immunosuppression treatment and who were within the first 3 years of their allogeneic HSCT. Only patients with no evidence of primary disease relapse/progression after transplantation were included, although the presence of minimal residual disease by molecular testing was allowed. Patients with an inability to comply with study procedures or anticipated survival of less than 6 months due to co-morbid disease were excluded. The criteria for diagnosis and staging of chronic GvHD were according to the 2005 NIH consensus recommendations for clinical trials.(23)

No therapeutic intervention was indicated by this study. Appropriate patients were identified by individual physicians at each center at the time of clinical visits. Potentially eligible patients were approached and the study procedures outlined. Signed informed consent was required for study enrollment. The patients were registered at the local institution. They were assigned a unique sequential study identification number after verification of eligibility and receipt of informed consent. Each institution retained a file of the patients enrolled in the study.

Patients were evaluated at the time of study enrollment and at 6-month intervals. Newly diagnosed patients (incident cases) had an additional assessment 3 months after enrollment. Physicians provided standardized information about organ involvement and symptoms at each evaluation. Only enrollment data were analyzed in the pilot study.

The medical assessment included the NIH chronic GvHD diagnosis and staging consensus,(20,23) as well the Hopkins and Vienna(29) scoring systems. Data were collected on skin, mouth, eye, gastrointestinal, liver and lung involvement, overall severity ratings (mild, moderate and severe), and perceptions of changes by physicians. As the mouth is the most common site of NIH chronic GvHD symptoms,(21) an oral cavity diagram was included in our study (Figure 1) to help to estimate the percentage of oral cavity surface involvement when grading GvHD. The length and width of the largest oral ulcer was also added to monitor response.

The objective of this multicenter, prospective, observational pilot study was to determine its feasibility of using the diagnosis and staging of chronic GvHD according to the NIH criteria at five institutions in Brazil. Each participating institution collected data prospectively.

Demographic and transplant related information were calculated as proportions. The comparison between groups was performed using chi-squared tests. Overall survival after onset of chronic GvHD was estimated by the Kaplan-Meier method. Analysis was carried out as of December 2009.

The Brazil-Seattle chronic GvHD multidisciplinary study group (GeDECH-Brasil/Seattle) was conceived by several Brazilian investigators who had been post-doctor fellows or visiting physicians at the FHCRC and by Mary Flowers, a collaborator and mentor in Seattle. The first initiative of the GeDECH-Brasil-Seattle consortium was to conduct a feasibility, multicenter, prospective, observational pilot study in a chronic GvHD Brazilian population applying NIH criteria similar to those being tested in a larger multicenter observational chronic GvHD study in the United States by Stephanie Lee et al. since 2007.

Most patients (21/34; 62%) had de novo onset of chronic GvHD, 15 in the overlap and 6 in the classic subcategories. No statistically significant differences between type of onset and NIH chronic GvHD subcategories were found (p-value = 0.17) (Figure 3).

The frequency of selected high risk features at the time of initial diagnosis of chronic GvHD associated with poor survival or prolonged immunosuppression(1,5,17,28) are shown in Table 2. At the time of initial diagnosis, 7 patients (20%) had progressive onset of chronic GvHD, 5 patients (15%) had platelet counts below 100 x 109/L, 10 patients (29%) had skin involvement of more than 50% of the total body surface area and 17 patients (50%) were receiving corticosteroids at a dose equal to or greater than 0.5 mg/kg/day.

After a median follow-up of 16.5 months, the overall survival from the initial chronic GvHD diagnosis in our patient population was 75% (Figure 5).

Two points should be highlighted in this paper. The first relates to describing the establishment of a consortium between investigators at the FHCRC and at Brazilian institutions to promote collaboration in research areas of common interest in HSCT, such as the Brazil-Seattle chronic GvHD multidisciplinary study group. The second relates to reporting the feasibility of conducting a multicenter pilot observational study in chronic GvHD applying the diagnostic, staging and response criteria as recommended by the 2005 NIH consensus conference for clinical trials.

Presence of high risks features associated with poor survival at the initial diagnosis of chronic GvHD (i.e., thrombocytopenia, progressive onset of chronic GvHD and skin involvement of more than 50% of the body surface area) was observed in approximately one third of patients in our study. While the follow-up is short, the 75% overall survival is an encouraging observation.

Several retrospective studies on evaluating the NIH criteria by assessing outcomes among patients with historically defined chronic GvHD reported conflicting results.(30-35) In a large retrospective study evaluating the NIH consensus criteria in the classification of late acute and chronic GvHD, Vigorito et al.(30) reported that antecedent late acute GvHD was associated with an increased risk of nonrelapse mortality and prolonged treatment in patients with NIH chronic GvHD. In that study, however, there was no statistically significant association between the presence or absence of NIH chronic GvHD criteria with survival, risk factors or non-relapse mortality, recurrent malignancy, or duration of systemic treatment.(30) In two smaller studies, however, Jagasia et al.(31) and Arora et al.(32) reported lower survival among patients with NIH GvHD defined as late, persistent, recurrent and acute compared to patients in overlap syndrome or classic chronic GvHD subcategories. In another study evaluating the NIH GvHD criteria, Cho et al.(33) reported no significant differences in GvHD-specific survival according to the NIH GvHD diagnostic criteria. Pérez-Simón et al.,(34) Kim et al.(35) and other investigators(32,33) evaluated the overall severity of chronic GvHD according to NIH criteria as a risk factor for survival and non-relapsed mortality and reported a lower survival for patients graded as severe.

In conclusion, this pilot study demonstrates the feasibility of applying the NIH consensus criteria for the diagnosis and scoring of chronic GvHD in a multicenter prospective study at five Brazilian institutions and, more importantly, in establishing a consortium of investigators interested in new opportunities to collaborate in future intervention, validation, and biomarker clinical trials in chronic GvHD and other areas of common research interest in hematopoietic stem cell transplantation.

The authors thank Kate Chilson for her assistance in the study forms and particularly to all patients who participated in the study.

M.E.D.F. and S.J.L. were supported, in part, by the National Institutes of Health, Department of Health and Human Services (grants CA 118953). 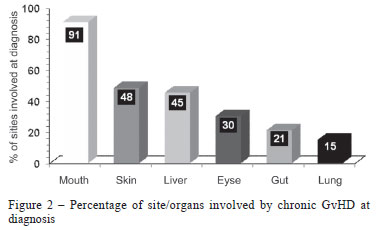 SciELO Analytics
Dimensions
Altmetric
Scite_
A multicenter feasibility study of chronic graft-versus-host disease according to the National Institute of Health criteria: efforts to establish a Brazil-Seattle consortium as a platform for future collaboration in clinical trials
PlumX