Systemic arterial hypertension (HBP) is a multifactorial disease with high prevalence in the elderly population, hence resistance exercise (RE) is recommended for that disease. However, the literature lacks studies that demonstrate the acute hypotensive effect of RE in hypertensive elderly subjects. This study aimed to compare the effect of post -exercise hypotension (PEH) for 60 minutes between two sessions of resistance exercises performed at different intensities, but with the same load-repetition ratio in hypertensive elderly elderly women. The sample consisted of 32 women, randomly divided into two groups: 16 patients in the light intensity group (G1) and 16 patients in high intensity group (G2), both with the same training volume. After two weeks of adaptation, the elderly women performed three sessions of resistance exercise and immediately after them, their systolic and diastolic blood pressure were measured for 1 hour every 10 minutes. For statistical analysis Student's t test for independent samples, Fisher exact and analysis of variance one-way ANOVA, with p < 0.05 considered significant were used. There was not significant difference of systolic and diastolic blood pressure after exercise in the individuals in groups G1 and G2, neither intra-group. However, there was a tendency for blood pressure reduction in G1 compared to G2. Our data suggest that the sequence of resistance exercise with duration of three sessions did not result in PEH in hypertensive elderly patients, with no significant differences in systolic and diastolic pressure between the groups with light and high intensity. 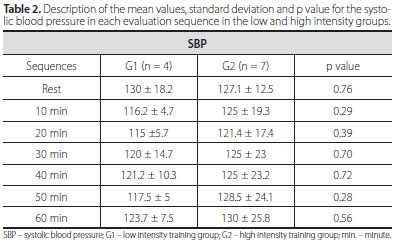