The atmospheric flow at the Alcantara Launching Center (ALC), which is localized near a 50 m cliff, was studied through analysis of wind tunnel (WT) experiments, using a 1:1000 geometric scale and floor level configurations to represent the cliff and its downwind roughness. The WT experiments, with 90° and 70° steps representing the cliff, both with and without additional downwind roughness, did show: (i) a perfect simulation of the ocean wind profile (α = 0.15) above the position of the step representing the cliff, through the use of a upwind carpeted fetch to provide the necessary roughness; (ii) the highest Reynolds number possible, based on the height of the cliff, was 6.52 x 10(4) inside this WT, while it reached 3 x10(7) at the ACL - thus, a more powerful tunnel is needed to simulate this last situation; (iii) the values of α nearest to the ones obtained at the ACL resulted from the 90° step experiment without any extra covering over the floor, except the upwind carpet; (iv) the fixing of cubes downwind of the step resulted roughness much greater than the ones observed over the ACL vegetation, so possibly simulating urban or industrial situations; (v) typical characteristics which occur downwind a step were simulated, such as the detachment and the posterior reattachment of the flow, plus the formation of circulation bubbles; (vi) the use of more powerful WTs would certainly permit the simulation of the atmospheric behavior of the ACL. 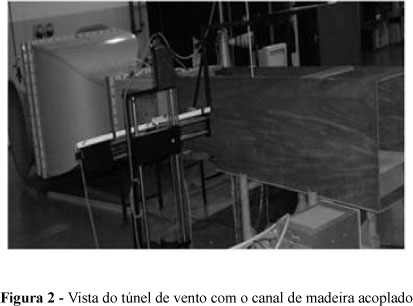