PERFORMANCE AND QUANTITATIVE AND QUALITATIVE CARCASS TRAITS IN PIGS FED ON CANOLA MEAL1 1 - Paper extracted from the doctoral thesis of the first author.

The goal of the present study was to assess the nutritional value of CM in diets for growing- finishing pigs and its effects on performance and carcass traits.

The experiments were carried out in the swine sector of Iguatemi Experimental Farm, Agricultural Sciences Centre of the State University of Maringá, State of Paraná, Brazil (23°21' S, 52°04' W; 564 m altitude).

Were conducted two experiments. The first assessed the total digestibility of CM and the second assessed the performance of growing-finishing pigs and carcass traits. The CM was acquired in an agroindustrial firm of the State of Paraná, Brazil. The experimental procedures and the use of animals were previously approved by the Ethics Committee of the State University of Maringá, Approval Certificate No. 136/2010.

The digestibility experiment was carried out from March to April 2010 assessing 14 castrated commercial crossbred male pigs with initial live weight of 60.69 ± 4.26 kg. The pigs were housed in individual metabolism crates under controlled environment. The digestibility trial lasted 15 days, ten for adaptation and five for collecting faeces and urine. The control diet consisted of maize (72.97%), soybean meal (24.45%), salt (0.570%), calcium carbonate (0.635%), dicalcium phosphate (0.875%), and mineral-vitamin supplement (0.50%). These components were formulated according to the requirements proposed by Rostango et al. (2005). Were used two diets (treatments): control; and control (75%) with addition of CM (25%) performing seven repetitions per treatment.

Provision of diets and collection of faeces and urine were performed according to the method proposed by Sakomura and Rostagno (2007SAKOMURA, N. K.; ROSTAGNO, H. S. Métodos de pesquisa em nutrição de monogástricos. Jaboticabal: Funep. 2007. 283p.). During the collection period, feed intake was calculated based on the metabolic weight (kg0.75) of each pig and the average consumption recorded during the adaptation period (approximately seven days).

Experiment II assessed the performance during the growing (30-60 kg) and finishing (60 to 90 kg) phases and was carried out from July 2010 to February 2011. During the experiment, the minimum average temperature was 18.8 ± 2.32 °C and the maximum 29.1 ± 4.11 °C. Were used 50 commercial crossbred pigs whose average initial live weight was 29.90 ± 1.16 kg and the average finishing live weight was 60.33 ± 3.38 kg during the growing phase. During the finishing phase, the average initial live weight was 60.37 ± 1.46 and the average final live weight was 90.37 ± 3.19 kg. The pigs were housed in brick sheds divided into two sectors, each with 10 pens (7.60 m2 each) separated by a central corridor. Each pen had pacifier-type drinkers at the back and single feeders at the front, which provided free access to feed and water. The diets and water were provided ad libitum throughout the experiment. The treatments consisted of four diets (6, 12, 18, and 24% CM) and a control diet (0% CM). The diets (Tables 1 and 2) were formulated as recommended by Rostagno et al. (2005ROSTAGNO, H. S. et al. Tabelas brasileiras para aves e suínos: composição de alimentos e exigências nutricionais2. ed., Viçosa, MG: UFV, 2005. 186p.) for growing-finishing pigs. We assessed the ileal digestibility to determine the digestible amino acids of the CM and the results were used to formulate the diets. Were determined the levels of protein, phosphorus, and calcium in maize and soybean meal samples at the Laboratory of Food and Animal Nutrition Analysis, State University of Maringa, Paraná, Brazil. The metabolizable energy values were those cited by Rostagno et al. (2005). The values of digestible amino acids of maize and soybean meal were calculated using true amino acid digestibility coefficients reported by Rostagno et al. (2005).

The experimental design consisted of randomized blocks with four treatments (6, 12, 18, and 24% CM), 10 repetitions, and one pig per experimental unit. The pigs were weighed at the beginning and at the end of the experiment. Were determined the daily feed intake, the daily weight gain, and calculated the feed:gain ratio of each pig. 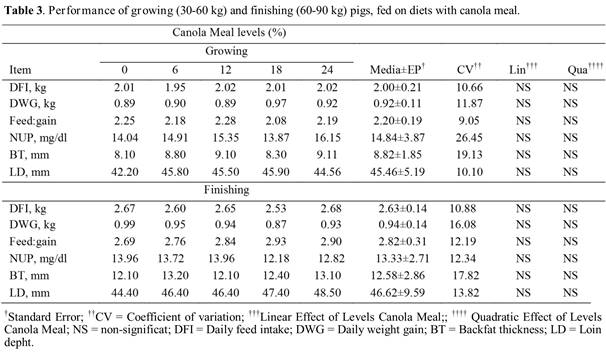 However, Moreira et al. (1996MOREIRA, I et al. Utilização do farelo de canola na alimentação de suínos na fase total de crescimento e terminação (61 a 141 dias). Revista Brasileira de Zootecnia , Viçosa, v. 25, n. 4, p. 697-712, 1996.) worked with growing-finishing pigs and concluded that there was a reduction in the performance of the pigs according to increased CM levels in the diets. These authors linked this behaviour to the fact that CM contains high levels of crude fibre that can impair the performance. Thacker and Newkirk (2005THACKER, P. A.; NEWKIRK, R. W. Performance of growing-finishing pigs fed barley-based diets containing toasted or non-toasted canola meal. Canadian Journal of Animal Science , Saskatoon, v. 85, n. 1, p. 53-59, 2005.) worked with growing-finishing pigs (28.7 to 107.4 kg of live weight) and observed that there was a reduction in daily weight gain and feed: gain ratio during the growing phase when they completely replaced soybean meal with CM as a protein source. In the finishing phase, total replacement did not affect daily feed intake, daily weight gain, and feed: gain ratio.

Results obtained by Seneviratne et al. (2010SENEVIRATNE, R. W. et al. The nutritional value of expeller-pressed canola meal for grower-finisher pigs. Journal Animal Science, Champaign, v. 88, n. 6, p. 2073-2083, 2010.) were similar to those of the present study. They assessed pigs fed on diets containing a maximum of 23% CD during the growing phase and found no when they increased the level of CM inclusion in finishing pigs, the daily weight gain decreased linearly and feed: gain ratio worsened. With regard to the quantitative carcass traits (Table 4), none of the variables was influenced by the addition of CD (p ≥0.05).

Dunnett's test indicated that there was no difference (p ≥0.05) between the levels of CM inclusion and the control diet (0% CM) for most variables. However, for the variables 'hot carcass weight' and 'cold carcass weight', the values were lower (p ≤0.05) between inclusion levels of 12, 18, and 24% for hot carcass weight and between 18 and 24% for cold carcass weight compared with the control diet. This result is due to the lower weight of these animals at sacrifice. However, special attention should be given to these variables. Losses during cooling represent an important value related to the percentage of carcass water loss in the refrigerator (BRIDI; SILVA, 2009BRIDI, A. M.; SILVA. C. A. Avaliação da Carne Suína. 2. ed. Londrina, PR: Midigraft, 2009. 120p.). Therefore, these results indicate that up to 24% of CM inclusion in the diets does not affect the quantitative carcass traits in pigs.

In addition, Zanotto et al. (2009ZANOTTO, D. et al. Utilização do farelo de canola na alimentação de suínos em crescimento e terminação. Archivos de Zootecnia, Córdoba, v. 58, n. 224, p. 717-728, 2009.) reported that the inclusion of CM in the diet resulted in carcasses with lower meat yield. With the exception of colour (a*), lightness (L*), and tonality (b*) of the longissimus muscle, none of the other qualitative meat traits (Table 5) were influenced by the inclusion of CM (p ≥0.05).

There was a linear decrease (p≤0.05) in lightness (L*) and tonality (b*) of the longissimus muscle as the CM level increased in the diet. Dunnett's test indicated differences (p ≤0.05) between the levels of CM inclusion and the control diet (0% CM) with respect to muscle colour.

The addition of up to 24% CM did not interfere in the performance and quantitative and qualitative carcass traits in growing-finishing pigs. CM can be used as alternative protein source in the balancing of diets for pigs. However, it is important to conduct further studies to determine whether the cost-benefit ratio is adequate.