Neonatal hearing screening: index regarding the "pass"/"fail" sex, type of childbirth and the time of life

PURPOSE: to verify in newborn (NBs) without risk for hearing loss, the "pass/fail" index in the Universal Neonatal Hearing Screening (UNHS), relating them with the sex, childbirth type and time of life. METHOD: characterized as a quantitative, retrospective, sectional and of group study, inserted in the secondary attention to health of a University Hospital, where 1526 NBs handbooks were analyzed, with analyzer of Transients Otoacoustics Emissions (TOAE) model Otoport Lite. It was adopted as inclusion criteria NBs in term of both sexes. It was excluded from the research 355 NBs that presented one of the indicators risk associated to hearing loss, or still, if some of the data collected by the research were incomplete. The sample studied was 1.171 records. RESULTS: 88,3% of NBs passed in the first testing. It was not found out significant findings regarding to "pass/fail" index and sex and childbirth type. The NBs that accomplished the testing up to 28 hours after birth fail more frequently, while the ones with more than 32 hours of life pass more frequently. CONCLUSION: the study demonstrated that there was a more appropriate moment for accomplishment of the first testing, where NBs up to 28 hours of life fail more frequently, while the ones with more than 32 hours pass more frequently in the first testing. 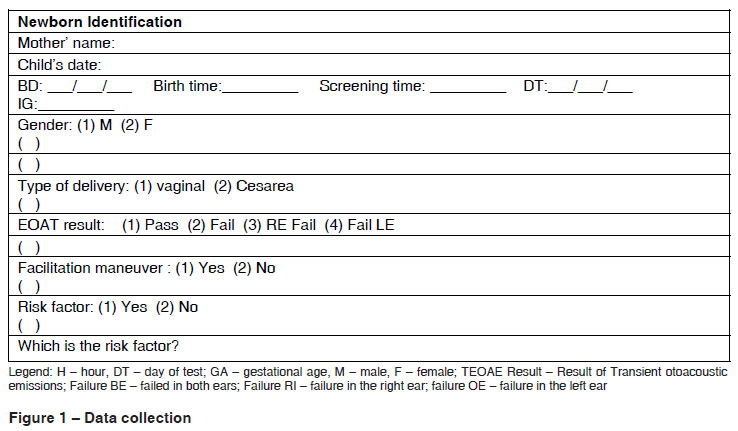