PURPOSE: to check, through an electromyographic evaluation, the electrical activity pattern of the orbicular oral, masseter and temporal muscles on nasal breathers, obstructive and vicious oral breathers in order to compare them. METHODS: 59 children, 15 nasal breathers (NB); 23 vicious oral breathers (VOB) and 21 obstructive oral breathers (OOB) were studied. All were submitted to an otorhinolaringological and speech-language patology evaluation and to an electromyographic exam in rest, masticatoric and labial isometries. We developed a Kruskal-Wallis variance analysis in order to make a comparison between the groups and the two-by-two groups and the Wilcoxon's test in order to compare between the muscles (p<0,05). RESULTS: after comparing the three groups, there were no relevant difference in the studied muscles, except for the right masseter muscle while resting, when the VOB and NB were compared; and to the lower orbicular muscle while resting and left temporal muscle in the masticatoric isometry, when NB and OOB were compared. In the comparison between VOB and OOB, any muscle has showed a relevant difference. The lower orbicular muscle was more active than the upper orbicular muscle while resting and on labial isometry, mainly in VOB and OOB. The relation of the muscles on the opposed sides of face in the masticatoric isometry revealed asymmetry. The temporal muscle demonstrated being more active than the masseters while resting and in masticatoric isometry. CONCLUSION: the breathing mode did not modify the behavior of the evaluated muscles when comparing the groups; oral breathing etiology did not change the electrical activity of the evaluated muscles when comparing VOB and OOB. 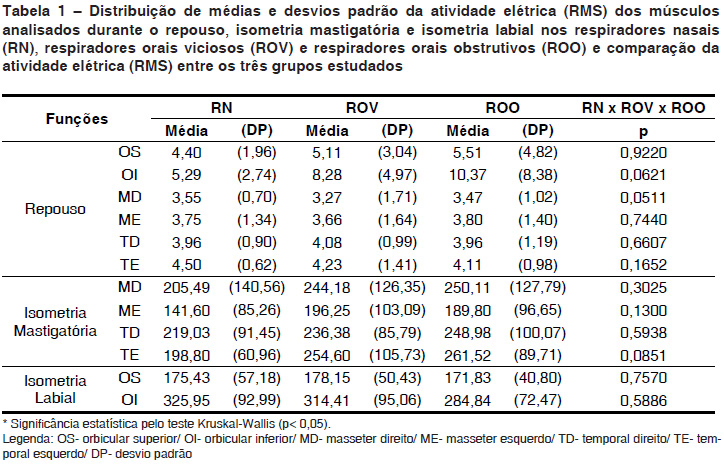