College professors are exposed to numerous pressure sources which affect their quality of life and professional activities. Notwithstanding, studies discussing musculoskeletal disorders in this population are still scarce in the literature. This study aimed at evaluating symptoms of work-related musculoskeletal disorders among professors of the University of Pernambuco – Petrolina Campus.

Sample was made up of 49 professors and to obtain musculoskeletal symptoms prevalence and typology, the Nordic Musculoskeletal Symptoms Questionnaire was used, as well as the visual analog scale to evaluate pain intensity.

The prevalence of musculoskeletal symptoms was 85.7%, being that 64.3% have reported that symptoms are related to and worsen with teaching activities, being cases suggestive of work-related musculoskeletal disorders. Most affected anatomic region was lumbar spine (54.8%), followed by cervical spine (45.2%), shoulders (23.8%) and wrists/hands (23.8%). Most prevalent regions with severe pain were upper limbs (36.8%), lower limbs (32.0%) and spine (21.9%).

The studied sample had a high prevalence of musculoskeletal symptoms and acknowledged that symptoms are related to and worsen with teaching activities, being suggestive of work-related musculoskeletal disorders.

So, college professors deserve attention as to potential health risks and problems related to their labor activity. So, studies addressing this population are important to justify physiotherapeutic actions on them, with preventive measures and actions, by means of evaluations and intervention projects, which shall act to fight musculoskeletal pain and discomfort, which is a necessary situation since it is unlikely to professors to work with satisfaction and quality feeling presenting this framework.

In addition, the study is justified for analyzing WRMD symptoms in college professors of the University of Pernambuco – Petrolina Campus (UPE – Petrolina), and for focusing on possible triggering factors and repercussions in their professional and personal activities, allowing that interventions may be developed to improve their quality of life.

During data collection, 118 professors met inclusion criteria being the project presented to all professors through meet ings. From these, 55 have answered and returned data collec tion tool being that only adequately answered questionnaires were analyzed to obtain results and so, 49 made up the stud ied sample.

Data were obtained after consent through a selfapplicable questionnaire made up of questions of sociodemographic, occupational and life habits aspects, by NMSQ for muscu loskeletal symptoms validated for the Brazilian population66 Pinheiro FA, Troccoli BT, Carvalho CV. [Validity of the Nordic Musculoskeletal Questionnaire as morbidity measurement tool]. Rev Saude Publica. 2002;36(3):307-12. Portuguese., which is a tool with multiple choices regarding symptoms in different anatomic regions, as shown infigure 1.

Data were analyzed by the statistical software SPSS (Statistical Package for the Social Science) version 20.0. Initially, a descriptive analysis of sociodemographic variables was per formed. After checking data normality (ShapiroWilk test), quantitative variables were presented by central trend and variability measures (mean and standard deviation). Nominal or categorical variables were presented by frequencies distri bution with significance level of 5%.

Sample was made up of 49 professors of all UPEPetrolina departments, with predominance of health area courses with a total of 67.3% of evaluated professors. Gender distribution has shown that among studied professors, 71.4% were females and 28.6% were males. Age mean and standard deviation were 39.12±10.73, varying between 25 and 63 years. When analyzing for how long professors have been teaching at UPE – Petrolina, mean and standard deviation were 6.54±7.65 years with minimum of 0.5 year and maximum of 33 years. Most prevalent weekly workload among professors has varied between 31 and 40 hours (77.6%), as shown infigure 2.

When asked about general professional satisfaction, excluding financial issues, 91.8% have answered being happy and 8.2% being not happy. About perception of tiredness level, 12.2% have reported being tired, 65.3% a little tired and 22.4% very tired. Mean and standard deviation for daily hours remaining standing up to carry out teaching activities were 4.53±1.95 hours. Through IPAQ answers, it was observed that 44.9% of evaluated professors are sedentary, as shown infigure 3.

Based on NMSQ results, one may infer that 85.7% of professors have stated feeling some type of musculoskeletal symptom (pain, discomfort, tingling and numbness), being that from these professors, 64.3% (n=42) have reported that symptoms are related to and worsen with teaching activities, as shown infigure 4.

Figure 5 shows the distribution of symptoms by anatomic region reported by professors in the NMSQ. Lumbar region was the most prevalent and was reported 23 times (54.8%) Musculoskeletal symptoms intensity reported by volunteers and collected by VAS are shown intable 1, being most affected anatomic region with severe intensity the region of upper limbs, with 36.8% of reports based on total number of professors reporting having some symptom (n=42).

Mean time teaching at UPE – Petrolina was 6.54 years with most frequent workload (77.6%) varying between 31 and 40 hours, thus representing a majority with two workloads. In addition, according to article 67 of the Law of National Education Guidelines and Bases1616 Castro MLO. A educação na Constituição de 1988 e a LDB: Lei de diretrizes e bases da educação nacional. Brasília: André Quicé; 1998. 278p., hours dedicated to prepare lessons, correct tests and to study should also be part of total weekly hours. So, one may assume that this number is higher and, as a consequence, when increasing workload the exposure period to different risk factors is also increased1717 Carvalho AJ, Alexandre NM. Sintomas osteomusculares em professores do ensino fundamental. Rev Bras Fisioter. 2006;10(1):35-41.. Professors are among those suffering the most with exposure to workplace risks, since workplace is often conflicting, associated to high professional requirements, which may increase stress load and impair physical and mental wellbeing of workers, bringing consequences to their health and working context1818 Caran VC, Freitas FC, Alves LA, Pedrão LJ, Robazzi ML. Riscos ocupacionais psicossociais e sua repercussão na saúde de docentes universitários. Rev Enferm. 2011;2(19):255-61.. So, professional satisfaction may be affected; however, among participants of this study, all have reported being professionally happy.

From evaluated professors, 87.7% have reported feeling some level of tiredness and one possible cause for such perception might be sedentariness, which may make individuals more prone to diseases, directly interfering with the level of tiredness and also with working productivity1919 Salve MG, Theodoro PF. Saúde do trabalhador: a relação entre ergonomia, atividade física e qualidade de vida. Salusvita. 2004;23(1):137-46.. Results have shown 44.9% of sedentary professors, confirmed by Fernandes et al.2020 Fernandes MH, da Rocha VM, da Costa-Oliveira AG. [Factors associated with teachers' osteomuscular symptom prevalence]. Rev Salud Publica. 2009;11(2):256-67. Portuguese. who carried out a study with basic education professors and have found 80.7% with inadequate physical activity level. They have also observed, in a multivariate analysis, association between inadequate physical activities and the presence of musculoskeletal symptoms among investigated professors.

There has been high prevalence of musculoskeletal pain and discomfort among UPE – Petrolina professors; 85.7% of evaluated professors, similarly to other studies with basic education professors2020 Fernandes MH, da Rocha VM, da Costa-Oliveira AG. [Factors associated with teachers' osteomuscular symptom prevalence]. Rev Salud Publica. 2009;11(2):256-67. Portuguese. which have shown the presence of symptoms in 93.0% of all evaluated individuals, and with elementary education professors1111 Mello EM, Caixeta GF, Caixeta A. Prevalência de lesões osteomusculares em professores do ensino fundamental. Rev Saude CESUC. 2010;1(2):1-13. with 100% of professors reporting musculoskeletal pain or discomfort. Such results show that there is no difference on musculoskeletal disorders among professors of different educational levels.

The high incidence on lower limbs (LLLL) is being pointed1111 Mello EM, Caixeta GF, Caixeta A. Prevalência de lesões osteomusculares em professores do ensino fundamental. Rev Saude CESUC. 2010;1(2):1-13. as being caused by the maintenance of standing up posture for a relatively long time, often necessary to perform their work. Among professors reporting pain, 59.52% have referred LLLL pain and discomfort and 32.0% have classified them as severe.

The Ministry of Health points that preventing WRMD should be based on strategies improving workers’ health in their workplaces, alerting them about ergonomic and environmental risks, including physiotherapeutic assistance to evaluate, guide and, if necessary, treat possible disorders.

This study has shown that the prevalence of musculoskeletal symptoms among evaluated professors was very high, being that the majority has reported close relationship of such symptoms with teaching activities, being inactive aspects of WRMD.

Studies with larger sample sizes are suggested so that possible correlations and associations may be statistically evidenced, as well as to demonstrate external validity in addition to internal validity. This is needed to supply evidences for a global intervention for college professors, focused on preventing injuries, linked to ergonomic strategies directed to movements, postures and the whole overload required during work, thus decreasing the prevalence of WRMD, improving professors’ quality of life and productivity. 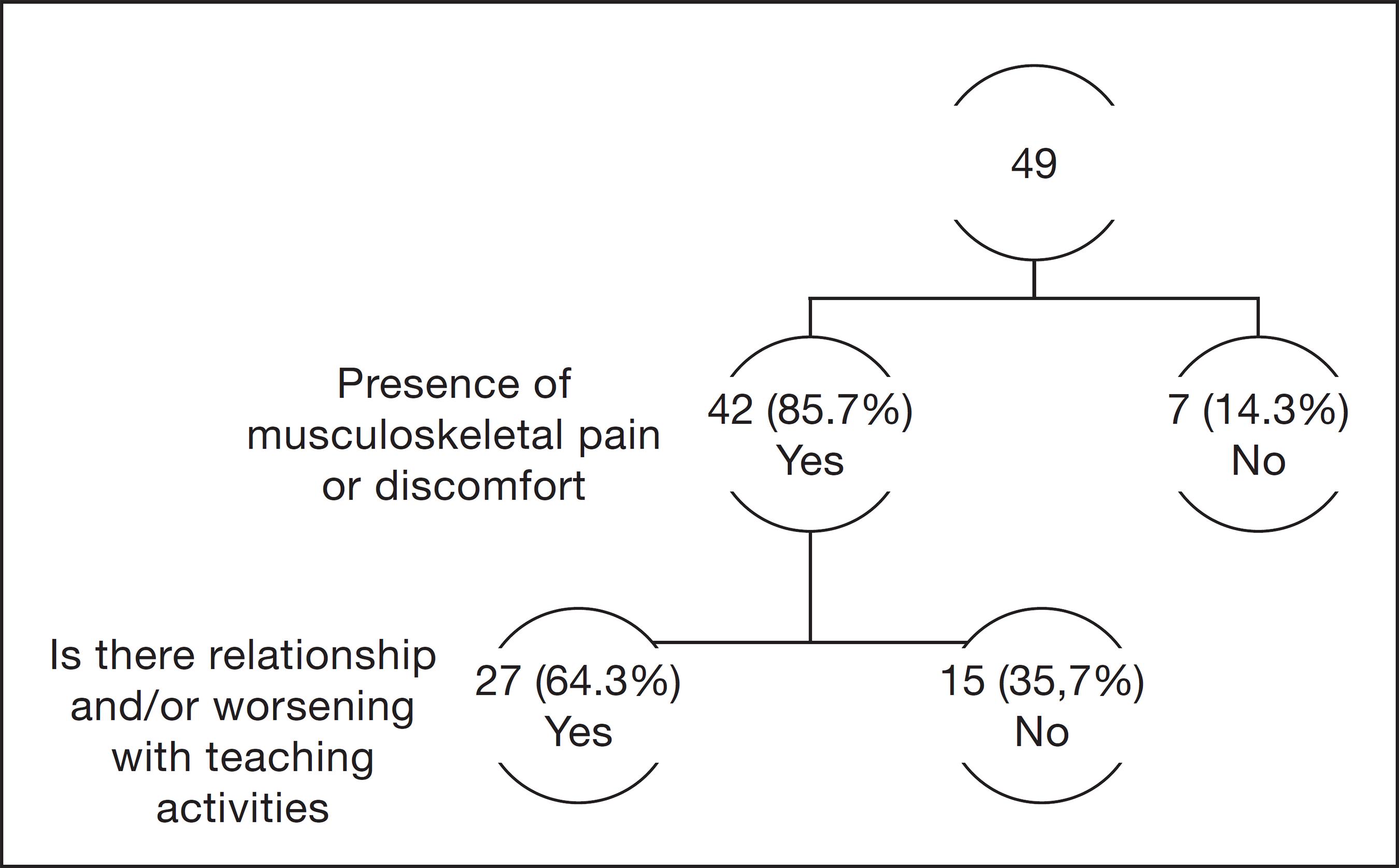