INTRODUCTION: Antibiotic-associated diarrhea (AAD) is an important side effect of this specific class of drugs. The objective of this study was to investigate the effect of the use of probiotics in the treatment of AAD. METHODS: A group of hospitalized patients, who contracted diarrhea during or after 7 days of suspension of antimicrobial medication, was blindly randomized to receive a standardized diet associated with the use of the probiotics (Lactobacillus casei and Bifidobacterium breve) or its corresponding placebo, three times a day. RESULTS: Seventy patients were studied. For the experimental (n=35) and control (n=35) groups, respectively, the average time of treatment was 5.06±2.18 and 5.49±3.17 days (p=0.95), and the average duration of diarrhea, among those who were healed, was 4.87±2.13 and 4.52±2.55 days (p=0.36). Four (11.4%) patients who received probiotics and ten (28.6%) who received the placebo were not cured (p=0.13), and relapse rates were similar between both groups. Seven patients from each group, in addition to diarrhea, presented cases of bloating and/or abdominal cramps and/or vomiting (p=1.00). CONCLUSIONS: In this light, it is concluded that L. casei associated with B. breve, in the administered dosage and frequency, has no effect on the antibiotic-associated diarrhea. Similar studies need to be conducted with higher doses of these or other probiotics. 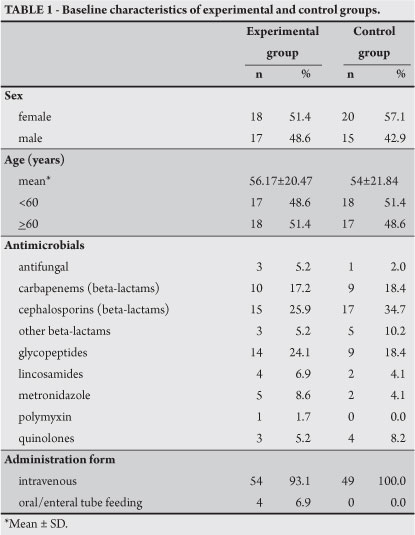 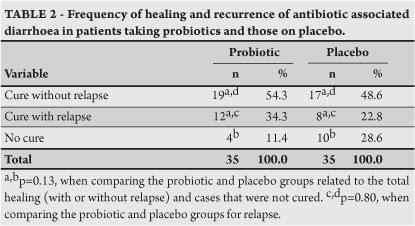