Insect pests have not been recorded for amaranth (Amaranthus cruentus L.) in Brazil. Generalized plant lodging was observed after the grain-filling period in an irrigated commercial amaranth crop (7 ha), located in Cristalina, state of Goiás (Brazil), which was cultivated between Aug. and Dec. 2009. Almost all sampled plants presented internal galleries bored by lepidopteran larvae. The larvae were reared, and the adults were identified as Herpetogramma bipunctalis (F.) (Crambidae). This is the first report of an insect pest causing significant damage in a commercial amaranth crop in Brazil, which indicates the need to develop pest management strategies in order to support the increased production in Brazil.

Insect pests have not been recorded for amaranth (Amaranthus cruentus L.) in Brazil. Generalized plant lodging was observed after the grain-filling period in an irrigated commercial amaranth crop (7 ha), located in Cristalina, state of Goiás (Brazil), which was cultivated between Aug. and Dec. 2009. Almost all sampled plants presented internal galleries bored by lepidopteran larvae. The larvae were reared, and the adults were identified as Herpetogramma bipunctalis (F.) (Crambidae). This is the first report of an insect pest causing significant damage in a commercial amaranth crop in Brazil, which indicates the need to develop pest management strategies in order to support the increased production in Brazil.

The genus Amaranthus L. (Amaranthaceae) comprises approximately 70 species, 50 of these native to the Americas (Kigel, 1994; Mosyakin and Robertson, 2003; Troiani et al., 2004). Currently, the species A. hypochondriacus L., A. cruentus L. and A. caudatus L., which have been domesticated for grain production, have economic importance (Spehar et al., 2003; Trucco and Tranel, 2011) and are commercially cultivated in different geographical areas such as the Americas, China, southern Europe, Russia and western Asia (Stallknecht and Schulz-Schaeffer, 1993). These species are considered functional foods because their grains have high protein levels compared with traditional crops, ranging from 12.8 to 17.4 %, and amino acids, mainly lysine and sulfur amino acids, which are found at low levels in other cereals (Bressani et al., 1987; Brenner et al., 2000). Amaranthus spp. crops have quick establishment, drought tolerance, high biomass production, nutrient cycling, and resistance to pests and diseases; additionally, they can be used as human food and animal feed (Spehar, 1998; Spehar and Lara Cabezas, 2001). In Brazil, only the species A. cruentus is cultivated in small areas for grain production (Spehar et al., 2003).

The species Herpetogramma bipunctalis (F.) (Lepidoptera: Crambidae) is considered a pest of the Amaranthus spp. (Tingle et al., 1978; Agunloye and Osisanya, 1985; Clarke-Harris et al., 1998; Salas-Araiza and Boradonenko, 2006) and it presents a wide tropical distribution (Allyson, 1984). It has also been recorded the infestation of a wide range of other dicotyledonous plant species, e.g., Brassica sp., Capsicum sp., Solanum nigrum L., and Piper aduncum L., as well as monocotyledonous plants, e.g., Xanthosoma spp. and Asparagus sp. (Allyson, 1984; Solis, 2006). In several countries, such as Jamaica, United States, Mexico and Venezuela, at least 26 species of arthropod pests of amaranth are registered (Sweetman, 1928; Allyson, 1984; Bautista-Martínez et al., 1997; Clarke-Harris et al., 1998; Solis, 2006; Torres et al., 2011); however, there are no records of damage by pests in Brazil.

This study aimed to record, for the first time in Brazil, the occurrence of an insect pest in a commercial amaranth (A. cruentus) crop.

Between Aug. and Dec. 2009, amaranth plants, in the grain-filling period, presented lodging or breaks in the middle or the lower one-third of the stem in a commercial field of A. cruentus, with an area of around 7 ha, located at Cristalina, state of Goiás, Brazil (16o1654 S; 47o2657 W; 936 m). At harvest, ten random transects of plants were established (each five meters in length and with approximate area of 18 m2) and used to evaluate the percentage of plants exhibiting a snapped stem due to damage by insect pest. Ten samples (with 100 plants each sample) also were taken randomly in the area to estimate the percentage of the presence of galleries in the plant stem. Symptomatic plant samples were collected. The stems were longitudinally sectioned and were examined by direct visualization. Lepidopteran larvae were observed inside the stems. Larvae were collected and stored in glass pots (10 cm height; 11 cm diameter), covered with a metal screen (0.68 mm openings). A thin layer of sterilized soil and small sections of amaranth stem were placed inside the pots to allow the insects to complete their development. The pots were kept in a growth chamber under controlled conditions [25 ± 2 ºC, 70 ± 23 % relative humidity, and 12 h photophase]. Adults were obtained after approximately 11 days. The specimens were killed and mounted on entomological pins for specific taxonomic identification (Figure 1).

The insects were identified as belonging to the species H. bipunctalis in accordance with the adult descriptions reported by Clarke-Harris et al. (1998) and Solis (2010); and by morphological and genitalia (Figure 2) comparison with specimens stored at the Entomological Collection of Embrapa Cerrados (Center for Agricultural Research on the Savannas  CPAC). The specimens of H. bipunctalis analyzed had low intraspecific morphological variation. The studied insect vouchers (five specimens) are stored as part of the Entomological Collection of Embrapa Cerrados (CPAC) (collection code: CPAC 12577).

All plants examined in the laboratory presented galleries up to 5 mm in diameter throughout the main stems (Figure 3). The galleries had occasional interruptions, dark coloration, and the presence of chewed plant material mixed with feces of H. bipunctalis larvae. Outside, at points that coincided with the larger diameter portions of the internal galleries, we observed the presence of small, circular or oval holes of approximately 1.5 mm (Figure 4). They were probably exit holes of the last instar larvae, which subsequently passed the pupal stage in the soil, as observed in the rearing pots kept in the laboratory. This is consistent with reports from amaranth crops in Mexico where the pupae were observed in the soil nearby host plants (Torres et al., 2011). 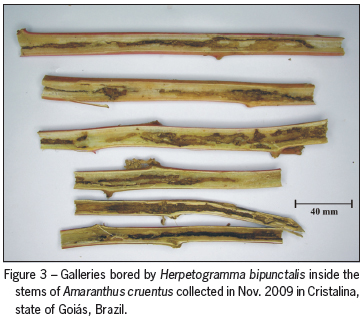 In each stem, in separate galleries, were observed a variable number of larvae of H. bipunctalis at different stages of development, indicating that several specimens can infest and develop within the plant. In the field, there was lodging or the presence of plants with a snapped stem, in approximately 80 % of the crop area. When harvested samples were examined, there were very few that did not show evidence of larval galleries due to H. bipunctalis (Figure 5). 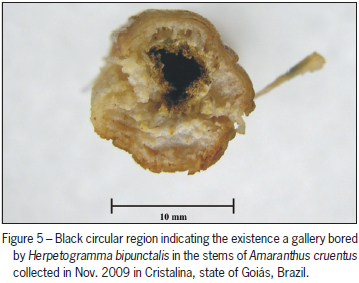 The few studies of amaranth in Brazil have not registered the presence of economically important pests (Spehar et al., 2003; Teixeira et al., 2003). Amaranth has only recently become a commercial crop in Brazil, and the planted area is still relatively small. However, the increased consumption of pseudocereals, whether for food, animal feed, or as an off-season crop, will cause an increase in the planted area. This first record of serious damage caused by H. bipunctalis in the commercial amaranth crop in Central Brazil indicates the need for development of management strategies for this species as a way to allow the expansion of crop cultivation in Brazil.

To Sebastião Conrado de Andrade (Dom Bosco farm- Cristalina/GO), for allowing us to collect amaranth plants on his property; to Wellington Cavalcanti, for genitalia drawings, and to Janio Fonseca Silva, for rearing of the Herpetogramma bipunctalis larvae.