Brazil is one of the main tomato producers worldwide. Nevertheless, 40 to 70% of the production is lost due to Bemisia tabaci (Gennadius) B biotype attacks. Resistant plant germplasm can be an important method for controlling this pest in an integrated pest management program. This research aimed to evaluate the no-choice ovipositional preference of B. tabaci B biotype on 18 tomato genotypes with different densities and types of trichomes testing two screening techniques and to determine the influence of trichomes on whitefly ovipositional preference. Two methods of confinement experiments were used. Leaflets detached from the upper third part of the tomato plants (first experiment) and 30-day-old plants (second experiment) were infested with whiteflies during 24 h. For the first experiment, simple linear correlation tests between the number of insects and eggs, and number of trichomes in the tomato genotypes were carried out. The first technique was better than the second one, as it was easier to carry out and the evaluation demanded less time and as well as was effective to discriminate the resistance level of the evaluated genotypes. Glandular trichomes had a negative correlation with attracted adults and number of eggs deposited, and a positive correlation with number of trapped insects. Negative correlations were observed between number of nonglandular trichomes and trapped insects, and also between total number of trichomes and attracted and trapped insects. Positive correlations were observed between number of total trichomes and eggs cm-2 and nonglandular trichomes and number of eggs. Both confinement methods efficiently discriminated whitefly oviposition among genotypes, especially the resistant ones. High levels of antixenosis for oviposition related to type IV glandular trichomes were exhibited by genotypes LA716, PI134417 and PI134418. The high level of ovipositional preference by B. tabaci for genotypes LA1963 and NAV1062 was related to a high density of type V nonglandular trichomes. 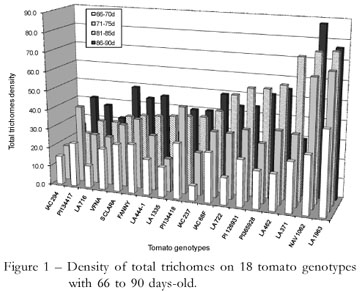 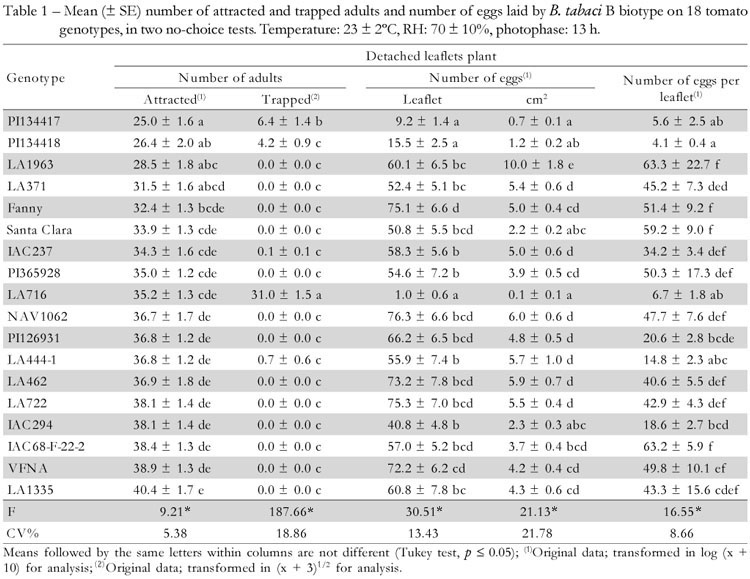