Thus, the aim of this study was to systematically investigate the effect of yellowing degree on the industrial utilization of tobacco leaves during the flue-curing process.

The experiments were performed separately in Chuxiong, Dali, and Yuxi, (the three-major tobacco-growing regions), Yunnan Province, China, in 2015 and 2016. The curing barns were all bulk curing barns with a horizontal layout. The experiment arrangements are in Table 1. The three locations are all characterized by mild variation in mean monthly air temperatures, from 10 °C in Jan to 25 °C in June, but have a relatively uneven distribution in mean monthly precipitation, with an annual average rainfall of 850 mm and 80 % of the precipitation occurring from May to Oct in all three locations.

During the flue-curing process, two treatments were designed: regular yellowing (R) and mild yellowing (M). For regular yellowing, tobacco leaves were wilted at a relatively low temperature (kept in the yellowing stage before 42 °C) until they were 80-90 % yellowed. The entire yellowing process included vein yellowing and eventual color fixation after wilting and softening. Regular yellowing is currently the conventional flue-curing mode favored by most tobacco growers. For mild yellowing, tobacco leaves were wilted at a relatively low temperature (yellowing stage) until 60 to 70 % yellowed, and entered the subsequent, higher temperature color fixation/leaf drying stage with yellow lamina but stems still green. The Hongda and K326 cultivars are expressed as H and K, while Chuxiong, Dali, and Yuxi locations are represented by C, D, and Y, respectively (Table 2). Flue-curing technology is popular in Yunnan Province given the main change points of temperature and humidity (as measured by a hygrometer) namely, 35/33, 38/35, 42/36, 48/37, 54/38, 62/39, and 68/39 °C (Figure 2), respectively. In the treatment process, the turning points were adjusted according to degree of yellowing and the flue-curing time of the tobacco leaves (Table 3). Each treatment had three replications or three curing barns at each location. 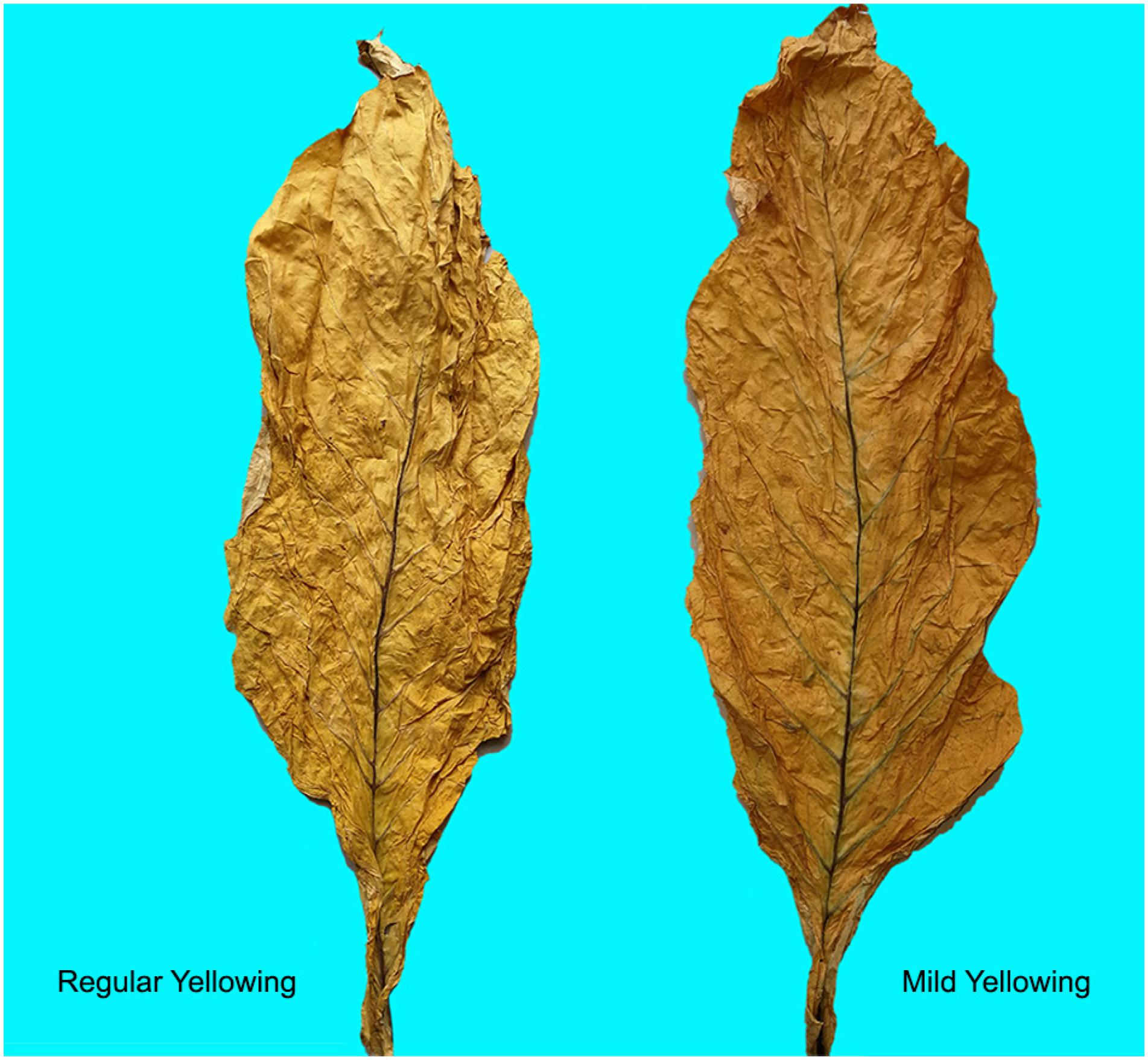 In order to make a judgement about which flue-curing treatment (mild or regular) left more space or potential for improving the smoking characteristics in re-drying or further physical processing, the re-drying intensity levels, including low-, mild-, and high-intensity re-drying processes, were examined for the re-drying trial.

The Hongda, and K326, cultivars were produced using high-quality and high-efficiency cultivation techniques with balanced nutrition, normal growth, and fresh leaves yellowed and matured on a layer-by-layer basis. In Aug, after cultivating for 90 to 95 days and topping for 35 to 40 days, the tobacco leaves turned pale yellow and 80 % of them were yellowed, with white and bright main veins, white branch veins, and down-rolled leaf apices and leaf margins. When the leaves were wrinkled, the 12th to the 14th mature leaves were collected and flue-cured according to experiment requirements. Other agronomic practices were conducted according to local standards for cultivating high-quality tobacco.

Yield and quality of tobacco leaves

C2F and C3F samples, each of 10 kg in mass, were also separately taken to conduct conventional chemical composition analysis after removing greenish tobacco from the flue-cured tobacco leaves. After equilibration for 72 h at constant temperature (22 °C) and humidity (60 %) levels, the samples were analysed according to the method for detecting the shatter resistance index of tobacco leaves provided by Chen et al. (2011)Chen, H.L.; Dai, H.J.; Du, Y.G.; Cui, D.K.; Yu, J.J. 2011. Relationship of shatter resistance index and machinability of tobacco leaf. Tobacco Science & Technology 10: 17-19 (in Chinese, with abstract in English)..

C2F and C3F samples, each of 5 kg mass, were separately taken to evaluate the smoking characteristics and quality after removing greenish tobacco from the flue-cured tobacco leaves. After re-drying, the scored smoking characteristics were provided by testers employed by the re-drying enterprise. Each sample was evaluated by seven certified experts and the results were the mean of seven reports.

Data were analysed by the General Linear Model (GLM) Procedure in SAS (Statistical Analysis System, version 9.3). Replicate measurements on composite leaf samples were averaged for statistical analysis of the treatment effects. Treatment effects were declared significant when the probability (p) of a greater F statistic was ≤ 0.05. Mean separation was undertaken by Tukey's honest significant difference (HSD) test at the 95 % level of confidence. For smoking characteristics, the data shown in this study was the average of seven reports.

Effect on yield and quality of tobacco leaves

During the production of tobacco leaves, yield and quality are mainly influenced by factors such as climate, soil, cultivation, harvest maturity, and degree of yellowing in the flue-curing process. The position, shape, physical feeling and color are the four key components of leaves which determine tobacco value in China. In this study, tobacco leaves with the same position and shape were cured and evaluated to identify the degree of yellowing that would exert a significant influence on the final yield and quality. The highest quality tobacco leaves were obtained after regular yellowing in the flue-curing process, which is conducive to increasing the flue-curing quality. High-class tobacco leaves, thus processed,exhibited maximum proportions of 78-84 % after different degrees of yellowing, respectively (Table 4). Moreover, mid- to high-class tobacco leaves, processed using regular yellowing, exhibited maximum proportions of 96-98 %, respectively, while fetching average prices of 30.50 to 34.77 yuan.

Effect on appearances of tobacco leaves

The appearance of the submitted samples was assessed against the Tobacco Industrial Classification Standard and the classifications of different samples are summarised in Table 5. CO2 indicates the highest-class level of tobacco leaves in the middle stalk position, while minor components indicate the acceptable level of tobacco leaves. The samples in the three experiment sites subjected to regular yellowing exhibited the best appearance with the highest proportion of CO2 and lowest proportion of minor components. This was most significantly reflected in tobacco leaves from Chuxiong where there was a difference in proportion (24 %) of CO2 in tobacco leaves in the two treatments.

Effect on the absorption and desorption properties

The smoking characteristics of the tobacco leaves subjected to regular yellowing obtained at the three experiment sites (Figure 1, First Sampling) were superior to those using mild yellowing (Table 8), and were reflected, in the main, by indices including aroma, aroma quantity, aroma quality, and purity. In terms of test sites, the smoking characteristics of tobacco leaves from Dali and Yuxi were superior to those from Chuxiong, which was primarily reflected in three indices including irritability, offensive odor, and purity; however, the after-taste of tobacco leaves from Chuxiong was better than those from the other two experiment sites. Various technologies such as re-drying are required in industrial processes based on industrial demands. However, according to feed-back related to industrial products, although tobacco leaves subjected to regular yellowing had a high score, they offered a thin smoke, light offensive odors, and a poor after-taste. Thus, the tobacco quality, close to that subjected to a re-drying process, cannot be as readily adjusted on the scale of industrial production. In contrast, tobacco leaves subjected to mild yellowing offered thick smoke and an intense impact, but were irritating; thus, their quality can be improved further according to industrial needs after the re-drying process.

Effect on yield and value of tobacco leaves

Effect on industrial appearance, resistance to further processing, and absorption and desorption properties

Effect on smoking characteristics of flue-cured, and re-dried tobacco leaves

The following conclusions are drawn from the experiments undertaken at three sites over a two-year period: first, in view of grower income, the appearance, proportion of upper-class tobacco leaves, and proportions and average prices of middle- and upper-class tobacco leaves subjected to regular yellowing are superior to those subjected to mild yellowing, regardless of cultivar. Second, from the perspective of industrial flue-cured tobaccos, samples with mild yellowing exhibit the greatest shatter resistance among the tobacco leaves tested and there is no significant difference between cultivars. Moreover, among the samples collected from the three sites, the samples with mild yellowing show quicker moisture absorption and desorption rates than those subjected to regular yellowing. Third, the scored smoking characteristics of tobaccos subjected to the flue-curing process with a regular degree of yellowing at the three test sites were all higher than those with mild yellowing. Despite this, the quality of flue-cured tobaccos with regular yellowing could be adjusted slightly from an industrial point of view and smoking scores decreased as intensity during the re-drying stage increased. In comparison, the quality of tobacco leaves with mild yellowing could be improved through subsequent re-drying to meet industrial demand. Therefore, the results suggest that the conventional degree of yellowing in the flue-curing process needs to be reduced according to the settings of the flue-curing process from the re-drying perspective in the tobacco industry.

From the perspective of re-drying and cigarette processing, the authors propose an appropriate degree of yellowing for flue-curing as driven by the reform requirement from the supply side to improve the effectiveness of re-drying and tobacco processing. The conclusion is that it is necessary to treat both Hongda and K326 cultivars in tobacco-growing areas of Yunnan Province with 60 to 70 % yellowing before 42 °C with a flue-curing process. This change would be most effectively brought about if the price structure was adjusted to render the tobacco obtained from mild yellowing more valuable to the farmer than that from regular yellowing in China.

This study was financially supported by several projects from the National Natural Science Foundation of China (No.41601330) and Yunnan Provincial Tobacco Monopoly Bureau, China (No. 2014YN13, 2016YN31 and 2017YN09). The authors are thankful to Dr. Mark S. Coyne for his valuable assistance and advice in the preparation of this paper.