The objective of this study is to verify the population density and the dynamics of tillering in the Marandu palisade grass sward subjected to nitrogen (N) fertilization strategies, characterized by the N supply via urea or bacterial inoculant (Azospirillum brasilense). The treatments comprised of four nitrogen fertilization strategies: (A) Without fertilization, (B) 80 kg N/ha, (C) inoculant (A. brasilense), and (D) 80 kg N/ha + inoculant, distributed in a randomized complete block design, with three replications. The nitrogen supply strategies were evaluated during six periods: October, November, and December (2012) as well as January, March, and April (2013). The nitrogen dose or inoculant had no effect on the tiller appearance rate (TAR), tiller mortality rate (TMR), tiller survival rate (TSR), or tiller population density (TPD). However, these variables were influenced by the season. The TAR and TSR were higher at the beginning of the experimental period (October) and lower towards the end of the period (March-April), whereas, TMR and TPD exhibited the opposite behavior, with lower values in October and higher from January onward. Neither the nitrogen nor the inoculant influenced the population dynamics of the tillers in Marandu palisade grass.

The persistence and productivity of tropical grasses are ensured by the constant replenishment of the P. purpureum Schumach. individuals in the population (Silva et al., 2008SILVA, S.C.; NASCIMENTO JÚNIOR, D.; EUCLIDES, V.B.P. Pastagens: conceitos básicos, produção e manejo. Viçosa: UFV, 2008. 115p.). Therefore, the ability of the plant to produce new tillers directly affects the population density and the grazing adaptability (Hodgson, 1990HODGSON, J. Grazing management: science into pratice. New York: John Wiley, Longman Scientific and Technical, 1990. 203p.). Given that the duration of life of the tillers is limited, with grazing being one of the main causes of its mortality, the combined benefits of utilizing A. brasilense mentioned above could augment tillering in the tropical grasses cited under grazing conditions. In this context, the objective of this study was to determine the isolated or combined effect of N supply via urea and/or a bacterial inoculant (A. brasilense) on the population density and tillering dynamics in Marandu palisade grass sward (Brachiaria brizantha cv. Marandu).

The experiment was conducted in Embrapa Agrossilvipastoril (−11°51' S and 55°37' W, elevation of 370 m), in partnership with the Universidade Federal de Mato Grosso (UFMT), between the months of October 2012 and March 2013 in grasslands of Brachiaria brizantha (Syn. Urochloa brizantha) cv. Marandu, established in 2011.

The treatments involved four nitrogen supply strategies: without nitrogen fertilization, 80 kg N/ha, only one bacterial inoculant (A. brasilense) and 80 kg N/ha + bacterial inoculant. These were distributed in a randomized complete block, with three replications, where each repetition included a plot of 30 m² (5 x 6 m), totaling 12 plots.

In September of 2012, all plots were harvested at a height of 7 cm and fertilizer was applied totaling 80 kg/ha Phosphorus (P2O5), 40 kg/ha Potassium (K2O), in forms of Superphosphate and Potassium Chloride (KCl), respectively. Nitrogen fertilization was fractioned in two post-harvest applications. The first nitrogen supply corresponded with the application of 40 kg N/ha and the second fertilization (40 kg N/ha + 40 kg K2O/ha) occurred between February 21, 2013 and March 13, 2013. Urea was used as the N source, and to avoid the volatilization effect, it was dissolved in 30 L of water and uniformly distributing throughout the plot by manual watering.

For the diazotrophic bacteria to colonize the plant tissues, the inoculum was introduced post-harvest, when there were openings or injuries on the leaves and stems. In the inoculated plots, A. brasilense bacteria (2 x 108 colony forming unit (CFU)/mL), of the Ab-V5 and Ab-V6 strains in particular, were used at a dose of 500 mL/ha. The inoculant was applied in the late afternoon, as a foliar spray, with a spray volume of 150 L/ha. A second application of the inoculum was performed in the fifth production cycle, on the same date of the nitrogen fertilization, always post harvest, to guarantee infection by the bacteria at the harvest tissues .

The plots were harvested when 25 cm of sward height was achieved, leaving a residue of 7 cm height (Lara and Pedreira, 2011LARA, M.A.S.; PEDREIRA, C.G.S. Respostas morfogênicas e estruturais de dosséis de espécies de braquiária. Pesqui. Agropecu. Bras., v.46, p.760-767, 2011.). To characterize forage accumulation, two quadrat samples (0.5 by 1 m) were clipped per plot. They were subsequently dried at 55ºC in a forced air dryer until constant weight. Assessments regarding population density and the dynamics of tillering were always performed in the post-harvest condition, in the months of October, November, and December (2012); and January, March, and April (2013).

In the first evaluation, all the tillers within the respective rings, both basal as well as air, were marked off with shielded wires using specific colored plastic. In the second evaluation, only the existing living tillers in the sampling rings, derived from the first mark, were re-counted and the new ones, which appeared between the sampling periods, were measured and identified by using threads different in color from the earlier one. From number of measurements of the tiller of each generation, in each evaluation, the balance between the appearance and death of the tillers was calculated, enabling the TSR to be determined by the equation TSR = 100 (number of tillers previously marked and living in the current marking / total number of live tillers in the previous marking) (Bahmani et al., 2003).

The population SI, based on the relationship between TSR and TAR was obtained by applying the following equation: Fp/Ip = TSR (1 + TAR), wherein: Fp/Ip corresponds to the final population (Fp) expressed as a percentage of the initial population (Ip) of tillers in a specific evaluation period; and TSR and TAR are the tiller survival and appearance rates, respectively, during the same period. When the index is equal to 1, the number of tillers is balanced and stable. Values below 1 indicate that the pastures have compromised their stability and imply that the number of tillers tends to decrease, as the appearance of new tillers would not be sufficiently large in number relative to the mortality, to maintain the density. Moreover, values greater than 1 indicate an upward trend in the number of tillers (Bahmani et al., 2003).

Assessment of the TPD was performed by counting the total number of tillers contained within a rectangle of 0.32m² (0.8 x 0.4m). These were released at random in the representative sites having average conditions in their plots, following the visual assessment of height and forage mass (Fialho et al., 2012FIALHO, C.A.; SILVA, S.C.; GIMENES, F.M.A. et al. Tiller population density and tillering dynamics in Marandu palisade grass subjected to strategies of rotational stocking management and nitrogen fertilization. Acta Sci. Anim. Sci., v.34, p.245-251. 2012.).

Statistical analysis was performed using the linear mixed models with repeated measures, employing the ML (maximum likelihood) methodology by means of PROC MIXED the statistical package SAS® (Statistical... 2013STATISTICAL analysis system. Version 8.2. Cary: SAS Institute, 2013.), version 8.2 for Windows®. All data sets were tested for normality of error distribution and homogeneity of the variances. In cases where the normal distribution of errors had not been checked, processing was performed according to the display suggested by SAS®. The matrix of the variance and covariance were tested and the choice was based on the Bayesian information criterion (BIC). The treatment effect was considered fixed and the block was considered to be the random effect, whereas, the time of year was considered to be the repeated measure over time. The correction of the degrees of freedom was performed using the method of Kenward and Roger (1997KENWARD, M.; ROGER, J. Small sample inference for fixed effects from restricted maximum likelihood. Biometrics, v.53, p.983-997, 1997.) - DDFM = KR. The treatment means were estimated using the "LSMEANS" and the comparison between them, if necessary, was performed by the probability of the difference (PDIFF) and error probability of 10%.

The forage accumulation, TAR, TMR, and TSR rates, did not differ between the N input strategies (P>0.10), but were rather influenced by the season (P<0.10 for all the variables). In the present study, despite the application of a nitrogen fertilizer and the use of a bacterial inoculant, other nutrients may have limited forage accumulation. Thus, it can be assumed that the use of an inoculant did not reduce the necessity of soil correction to guarantee forage growth. Forage accumulation was affected by the season, were raining months registered higher values (Fig. 2). Furthermore, the values obtained in this experiment are lower than those observed by Souza et al. (2016SOUZA, P.T.; BANYS, V.L.; DIAS, M. et al. Tillering of Brachiaria brizantha cv. Marandu inoculated with Azospirillum Brasilense or fertilized with nitrogen. In: INTERNATIONAL RANGELAND CONGRESS, 10., 2016, Saskatton. Proceeding… Saskatton: [s.n.] 2016. p.1-2 (Abstract).) in Marandu palisade grass pasture inoculated with A. brasilense in Oxisol dystrophic soils, which contributes to the previous assumption.

From the commencement of the experiment in October, the harvest of standardization promoted the increased light availability for the sward base, which combined with the availability of the growth factors (Fig. 1) resulted in the greatest TAR values recorded over the evaluation period (Fig. 3 A).

The TSR of the generations produced in early spring remained high until December, resulting in low values for the TMR (Figs. 3 B and C). From January 2013, the survival of the population of individuals began to decline, therefore, that the highest TMR values were recorded in March and April. These variations in the dynamics of the tillers between the evaluation months interfered with the population SI (P<0.0001), reaching values of less than 1 in March and April (Fig. 4), and the tiller population density (TPD, P<0.0001) (Fig. 5).

According to Matthew et al., (2000MATTHEW, C.; ASSUERO, S.G.; BLACK, C.K. et al. Tiller dynamics of grazed swards. In: LEMAIRE, G.; HODGSON, J.; MORAES, A.P.C.F. et al. (Eds.). Grassland ecophysiology and grazing ecology. Wallingford: CABI Publishing, 2000. 432p.), many grass species appear to have programmed seasonal patterns of tiller birth and death, which may be referred to as perennation strategies. Knowledge regarding the perennation strategy for particular cultivars or species can enable the identification of management and fertilization strategies that will improve their productivity, through the enhancement of the natural cycle of tiller replacement. In the Brazilian conditions, autumn, winter, and early spring seasons are characterized by a drop in temperature, radiation, and precipitation. The intense water deficit paralyzes growth and increases plant mortality. Steenhoudt and Vanderleyden (2000STEENHOUDT, O.; VANDERLEYDEN, J. Azospirillum, a free-living nitrogen-fixing bacterium closely associated with grasses: genetic, biochemical and ecological aspects. Fems Microbiol. Rev., v.24, p.487-506, 2000.) reported that Azospirillum inoculation promotes alterations in root morphology and architecture, which includes an increased number of lateral roots and root hairs, thus enlarging the root surface available for nutrient absorption. This results in a higher nutrient uptake by the inoculated roots, and thus, an improved water status of the plant. Based on these facts, the strategic supply of N via inoculation with A. brasilense could be an effective alternative in maintaining the survival of the individual generations, and minimizing the effects of climate constraints on the stability of the tiller population, during the seasons of autumn/ winter and early spring.

Rashid (2014RASHID, K.N. The response of wheat genotypes to inoculation with Azospirillum Brasilense. 2014. 249f. Tese (Doctoral) - Faculty of Agriculture and Environment, University of Sydney, AU.) demonstrated the positive effects of inoculation with A. brasilense over the entire length, area, and volume of the roots of wheat genotypes (T. aestivum) in the initial establishment phase. However, these effects decreased over time, and therefore, this strategy did not result in a higher biomass or grain production. According to the author, the promising effects of plant growth promoting rhizobacteria (PGPB) in the field can be limited by factors that influence their survival and activity in the rhizosphere.

Accordingly, experiments are required immediately, to evaluate the responses of the forage grasses throughout the year, to determine the possible benefits of inoculation with A. brasilense and identify the periods of the year that best suit its strategic implementation, so it can favor the tillering, population stability, and forage production. 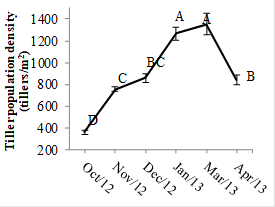