Length growth as a function of time has a non-linear relationship, so nonlinear equations are recommended to represent this kind of curve. We used six nonlinear models to calculate the length gain of rainbow trout (Oncorhynchus mykiss) during the final grow-out phase of 98 days under three different feed types in triplicate groups. We fitted the von Bertalanffy, Gompertz, Logistic, Brody, Power Function, and Exponential equations to individual length-at-age data of 900 fish. Equations were fitted to the data based on the least square method using the Marquardt iterative algorithm. Accuracy of the fitted models was evaluated using a model performance metrics combining mean squared residuals (MSR), mean absolute error (MAE) and Akaike's Information Criterion corrected for small sample sizes (AICc). All models converged in all cases tested. Evaluation criteria for the Logistic model indicated the best overall fit (0.67 of combined metric MSR, MAE and AICc) under all different feeding types, followed by the Exponential model (0.185), and the von Bertalanffy and Brody model (0.074, respectively). Additionally, ∆AICc results identify the Logistic and Gompertz models as being substantially supported by the data in 100% of cases. The logistic model can be suggested for length growth prediction in aquaculture of rainbow trout.

Mathematical modeling is defined as the use of equations to describe or simulate processes in a system, such as animal growth (Santos, 2008SANTOS, V.B.; RILKE, E.Y.; FREITAS, T.F. et al. Exponential growth model of Nile tilapia (Oreochromis niloticus) strains considering heteroscedastic variance. Aquaculture, v.274, p.96-100, 2008.). Mostly, growth is described as an increase in body dimension (mass, volume or length) as a function of time, and when this relationship is plotted, it results in a growth curve.

The data were collected at a commercial rainbow trout farm. The farm is located in the municipality of Nova Friburgo, a mountain region of the state of Rio de Janeiro, Brazil (22 ° 23'36 "S, 42 ° 29'12" W, 1.032 m altitude). This research was approved by the Ethics Committee on Animal Use (CEUA) of the Rio de Janeiro State Fisheries Foundation-FIPERJ with document number 007/2017007/2017.

The fish, without sex distinction, were acquired from the farms’ own breeding program. Nine hundred fish with an age of 273 days post-hatch (dph), and length (fork length) mean of 22.42 ± 0.71cm, were selected. Fish were distributed randomly into nine masonry tanks with a volume of 40 m3 each. Fish were fed with three different types of extruded pellets (two commercials diets, A and B, and one experimental diet, C) in triplicates [(A/1, A/2, A/3) (B/1, B/2, B/3) (C/1, C/2, C/3)]. Rations were offered twice a day until apparent saturation. The experimental period was 98 days. Length measures at the beginning and the end of the trial for each feed type are shown in Table 1.

The accuracy of the fitted models was evaluated using a model performance metrics. The performance criteria to evaluate the goodness of fit are: The mean squared residuals (); where RSS is the residual sum of squares, n is the number of observations, p is the number of parameters of the model (Rawlings et al., 1998RAWLINGS J.O.; PANTULA, J.O.; DICKEY, D.A. Applied regression analysis. 2.ed. New York: Springer-Verlag, 1998. 659p.). The Akaike Information Criterion (AIC) corrected for small sample sizes (AICc). ; where k is the number of estimated parameters in the model and L̂ is the maximum value of the likelihood function for the model, and ln is the natural logarithm (Akaike, 1973). ; where n is the sample size and k is the number of parameters.

We calculated the difference in AICc (∆AICc) values to test the support of inferior models by the data. ∆AICc is calculated as: AICc (AICc i - AICc min) (Katsanevakis and Maravelias, 2008KATSANEVAKIS, S.; MARAVELIAS, C.D. Modelling fish growth: multi-model inference as a better alternative to a priori using von Bertalanffy equation. Fish Fish., v.9, p.178-187, 2008.). Models with ∆AICc >10 have no support from the data, while models with ∆AICc < 2 have substantial support (Burnham and Anderson, 2002). Models with ∆AICc between 4-7 are somewhat supported by the data and might be taken into consideration.

The Mean Absolute Error (MAE) is the average absolute difference between observed and predicted outcomes and is calculated as: . The MSR, AICc, and MAE were calculated using SAS (Statistical…, 2013). Finally, the results from MSR, AICc, and MAE were analyzed using a scoring system in which each best fit accounted for one score. The model that had the best fit in most tested cases achieved the highest score. In addition, we interpreted the estimated regression parameters of each model in regard to the biological attributes of the species whenever possible.

All models met convergence in all (9 of 9 evaluations) tested cases through Levenverg-Marquardt´s iterative method. All models needed a comparably low number of iterations, and convergence was generally met within 100 iterations. The estimated parameters for each model are shown in Table 3.

Parameter A, values range between 39.63 and 10740.9. Within each group, the lowest value was mostly obtained by the Logistic and Gompertz models, while the highest value was usually estimated by the Bertalanffy and Brody models. In contrast, values in parameter B range between 0.00144 and 0.0001 with the lowest values being obtained by the Brody and Bertalanffy models, and the highest values by the Logistic and Gompertz models. Parameter T ranges between 5010.23 and 228.48 in the Gompertz model, and between 1491.86 and 255.23 in the Logistic model. Parameter T 0 for the von Bertalanffy model has values between -14.539 to 164.443.

The model performance metrics for each model are presented in Table 4. Lowest MSR-values are produced by the Logistic model in 0.67 of tested cases, followed by the Von Bertalanffy (0.11), Brody (0.11), Exponential (0.11) and Power Function (0.11) models. The Gompertz model did not perform the lowest MSR in any case. MAE is lowest in the Logistic model in 5 out of 9 tested groups, 0.55 respectively. The Gompertz, Exponential and Power function models produced lowest MAE once (0.11) (Table 4).

The overall score obtained by the models are presented at the bottom of Table 4. Undisputedly, the Logistic model achieved the best overall-scoring with 18 of 27 best fits (0.67). The Exponential model achieved best overall fit in 5 of 27 cases. The von Bertalanffy, and the Brody models scored only 2 out of 27 (0.07), and the Gompertz, and Power Function models achieved best fit just in one tested case and criteria (0.04). ∆AICc values range between 0.026 as the lowest and 44.61 as the highest. The Logistic and Gompertz models had substantial support by the data in all cases (Table 4). The von Bertalanffy and Brody models in 6 cases and, the Exponential and Power Function models in 2 cases each.

Parameter A for three-parameter models (von Bertalanffy, Brody, Logistic and Gompertz) describe the infinite size of an organism and can be interpreted as the possibility of the model to reflect the biological properties of the species. O. mykiss is known to exceed 120cm in length (Eaton et al., 1995EATON, J.G.; MCCORMICK, J.H.; GOODNO, B.E. et al. A field information-based system for estimating fish temperature tolerances. Fisheries, v.20, p.10-18, 1995.). Accordingly, Logistic and Gompertz models, estimated A within the biological range of the species in 7 of 9 cases, and for von Bertalanffy and Brody models in 5 of 9 cases.

Parameter T 0 for the von Bertalanffy model defines the hatching day of rainbow trout. In this study, this parameter does not have congruence with biological features since it is not possible to have negative or positive hatching age (up to 54 days). Similarly, parameter L0 for Exponential and Power Function models which define the hatching length differ between both models. In addition, L 0 of the Power function model shows values (0.0127 to 0.1116cm) smaller than the biologic features of rainbow trout (1.2 to 2cm) as described by Lavens and Sorgeloos (1996LAVENS, P.; SORGELOOS, P. Manual on the production and use of life food for aquaculture. Ghent: FAO Fish Tech Pap, 1996. n.361, p.1-2.).

In model selection, the goodness of fit should generally not be based on a single criterion. Correspondingly, it has become common practice to evaluate the most suitable model based on an evaluation metrics of mostly three statistical parameters of different properties (e.g. Yun et al., 2015YUN, B.; YU, X.; XUE, M. et al. Effects of dietary protein levels on the long-term growth response and fitting growth models of gibel carp (Carassius auratus gibelio). J. Anim. Nutr., v.1, p.70-76, 2015.; Lugert et al., 2017LUGERT, V.; TETENS, J. THALLER, G. et al. Finding suitable growth models for turbot in aquaculture 1 (length application). Aquacul. Res., v.48, p.24-36, 2017.; Powell et al., 2019POWELL C.; LÓPEZ, S.; FRANCE, J. Elementary functions modified for seasonal effects to describe growth in freshwater fish. J. Theor. Biol., v.461, p.133-144, 2019.). One parameter should be based on the residuals from fitting the model. The second parameter is often based on information theory either AIC, AICc or BIC. A third parameter is mostly somehow based on the deviation between estimated and sampled data. For these three categories of evaluation parameters, several different statistical parameters are available. In each scenario, the author needs to decide individually, which parameter is most suitable for the current study.

We used ∆AICc to identify whether our datasets were supported by more than one model. This was necessary, as the outcome from the analysis revealed very close numeric results between different models within tested groups. ∆AICc < 2 indicates substantial support of a model by the data (Burnham and Anderson, 2002). Indeed, in all 9 analysis, 2 out of 6 tested models were supported by the data, namely Logistic and Gompertz. This might be due to the specific pattern of our recorded data (grow-out phase), which are distributed around the POI of the growth curve. Accordingly, several models of sigmoidal behavior can equally well reflect this segment of the curve.

All six models (von Bertalanffy, Brody, Logistic, Gompertz, Exponential and Power Function) have shown the capacity to fit the length-at-age data of cultured rainbow trout during the grow-out phase. However, in the current study, the Logistic model achieved the highest accuracy in fit. Despite the growth-length curve of cultured rainbow trout not clearly follows a sigmoidal shape, the diminishing-return shaped von Bertalanffy and Brody models, as well as the exponential shaped Power Function and Exponential models do not meet the mathematical attributes needed to reflect length-at-age data. This is also verified by ∆AICc values, which indicate the Logistic and Gompertz model, as the only models having substantial support by the data in all cases. Furthermore, we showed that it is possible to model the impact of varies feeding strategies to predict long-term influences on growth and harvest size and production period.

This study was financed by the Co-ordination of Higher-Level Population Survey - Brazil (CAPES) - Finance Code 001, The National Council for Scientific and Technological Development (CNPq) Process number 141889/2019-5, Araribá Trout Farm, and by C.N. Rações. The authors want to thank Victor Octavio Borda Pua for his help with the suggestion of codes on the R software. 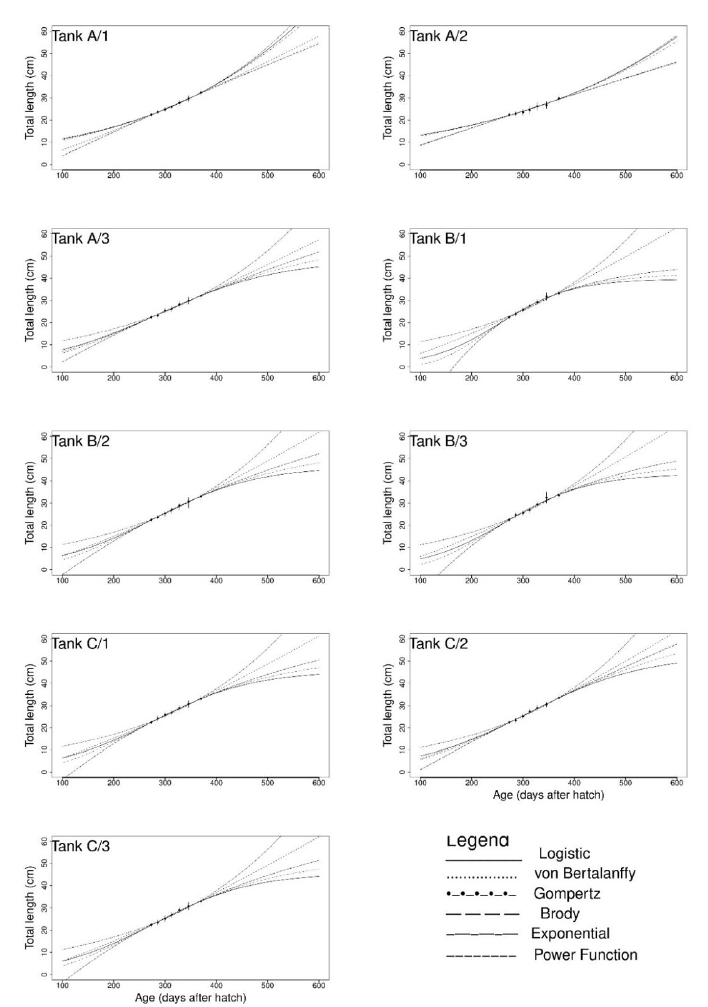