The importance of lead as a toxic metal and environmental pollutant has long been recognized. Its hazards to human and animal health have been reported worldwide (Oskarsson et al., 1992; Dwivedi, 1995; Cordeiro, 1996; Abreu et al., 1998). Lead poisoning is one of the most common toxicoses affecting domestic animals. Cattle have been the most frequently affected due to its high susceptibility and curious habits (Priester and Hayes, 1974; Blakley, 1984; Seimiya et al., 1991; Radostits et al., 1994). Isolate cases and outbreaks have been described, involving several species of animals and various types of lead sources such as paints, motor oil, batteries, fumes and dust from lead industries, lead arsenate insecticides, lead fishing weights, lead shot and bonfire ash (Aronson, 1972; Osweiler et al., 1971; Every, 1981; Shore et al., 1984; Galey et al., 1990; Preece, 1995; Stair et al., 1995; Waine, 2000). Paint has also been identified as the most common source of lead poisoning in small animals (Morgan, 1994). Although lead poisoning is common in other parts of the world, occurrences in Brazil have rarely been reported in horses (Mazeo et al., 1984) and in cattle (Ribeiro et al., 1999). This communication describes the clinical and pathological aspects of bovine lead poisoning, confirms its occurrence by lead analysis in southern Brazil, and describes the conditions, in which it has been observed.

In September 13, 2000, the Department of Veterinary Pathology of the UFRGS received a request for assistance from a local cattleman. Three out of 25 crossbred beef heifers, which were kept in a paddock with a large quantity of waste material were affected. These animals presented nervous signs such as severe depression (Fig. 1), muscular tremors, anorexia, normal body temperature, head pressing, teeth grinding, profuse salivation and blindness. All the affected animals died one week after the onset of clinical signs. Attempts of treatment with electrolytes and antibiotics were unsuccessful. One animal, which was euthanized on the sixth day after the onset of the disease because of its unfavourable prognosis, was necropsied. Specimens were collected and processed by standard histologic methods and stained by hematoxylin and eosin and Ziehl-Neelsen methods. Samples of whole blood collected with sodium heparin, milk, fragments of liver and kidneys, water and soil were analysed for lead concentration by atomic absorption spectrometry method as already reported (Stair et al., 1995).

Gross lesions included cerebral edema, which affected especially the meninges from the caudal cortex and caused herniation of the cerebellum toward the foramen magnum. Histologically, there were individual neuronal necrosis, cerebrocortical malacia, gliosis and occasional acid-fast, intranuclear inclusion bodies in the renal convoluted tubules (Fig. 2). The potential involvement of bacterial and viral pathogens, which may cause similar clinical syndromes, has been ruled out by specific and standard laboratory tests. The biochemical analyses performed on tissue samples from the necropsied heifer revealed lead levels of 2037 ppm in the kidneys and 110 ppm in the liver. Samples of water contained no detectable levels of lead, however the soil samples taken next to this water contained 27.3 ppm of lead. In the blood samples collected from four calves, only one had detectable lead concentration of 1.1 ppm. In addition, several cans of paint were found in the paddock. Some of the cans were intact, while others were rusty containers, which were leaking their content to the environment. Clinical and pathological findings of this study were similar to previous reports of lead poisoning in cattle (Shore et al., 1984). Furthermore, its occurrence in young animals have already been linked to their high susceptibility and their habits of licking and sucking anything left on its surroundings (Buck, 1970; Aronson, 1972). Although the detection of acid-fast intranuclear inclusions within the renal tubules of dogs are considered unspecific histological findings, in cattle they are indicative of lead poisoning (Mount and Feldman, 1984; Jubb and Huxtable, 1993). An attempt of treatment for lead poisoning was not performed because the animals were severely ill or already dead. As previously reported, it is noteworthy that lead environmental contamination poses a risk to animals and humans. The present report aimed to emphasize the importance of special care when inspecting pastures. Despite the fact that lead poisoning has been only sporadically reported in Brazil, its occurrence should be considered in the differential diagnoses of neurological diseases affecting livestock. 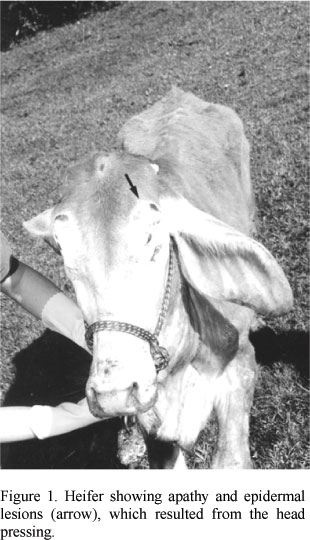